“Tristen doesn’t want to come off the field, and we don’t want him to come off the field,” said Milan football coach Jesse Hoskins. “He’s that type of player.” Hines is a 5-foot-11, 170-pound junior already in his third season on the varsity football team for Milan, which is off to a 3-0 start and tied atop the Huron League standings. During the past couple of seasons, he’s played running back, wide receiver and quarterback on offense as well as cornerback and strong safety on defense. He also returns kickoffs and punts. No matter where he plays, he’s electric. “The cool thing about Tristen is he doesn’t know how to be lazy,” Hoskins said. “He plays hard and enjoys it. He could play just about any offensive position. He’s a legitimate Division I recruit.” Early in his career, Hines played mainly just defense for Milan. As a freshman, he made an impact on the Big Reds defense, intercepting seven passes and joining in on 76 tackles. As a sophomore, he moved into more of an offensive role. When the season began he was a wide receiver, but an injury to starting Milan quarterback Dyllan Jones forced Hoskins to put the athletic Hines into the QB spot. “Our system fits a mobile type of quarterback and Tristen is just that, plus he passes the ball well,” Hoskins said. “This year, with D.J. (Dyllan Jones) returning and Hunter Aeschbacker at running back, we decided to keep Tristen at wide receiver.” Hines was happy with the move back to wide receiver. “I think for the team, that is the best position for me,” he said. “I like it better there. I like to go one-on-one with the defender and get out into space. If the defense must pay attention to me, that opens things up for the other guys.” Hoskins said there are various plays in the Big Reds’ playbook to get the ball into Hines’ hands. “We have a few wrinkles,” the seventh-year Milan coach said with a smile. The performance Hines had last week in Milan’s 46-24 win over Flat Rock made Hoskins and the Milan coaches look like geniuses. Hines caught six passes for 201 yards and three touchdowns from his wideout spot, ran for a touchdown and returned a blocked field goal 80 yards for a fifth score. In three games this season, Hines has 102 yards rushing, 323 receiving, 448 all-purpose yards and eight touchdowns. In Week 2, Hines rushed for one touchdown and had more than 100 receiving yards against Monroe St. Mary Catholic Central. It was a thrilling Milan victory, with the final touchdown coming with less than a minute left in the game. Milan’s Evan Furtney caught the game-winner from Jones. Hines couldn’t believe the finish. 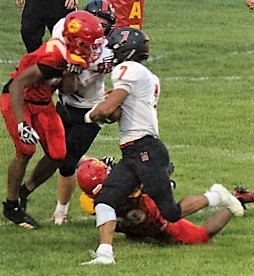 “We got the ball with four or five minutes left, which seemed like plenty of time,” he said. “In the huddle, I was like ‘All right, let’s get this down the field.’ But, we kept getting penalties and moving back. Finally, it was fourth down and it was like, ‘somebody has got to make a play.’ … I knew the ball wasn’t coming to me. When D.J. threw it up and Evan came down with it, I just started jumping up and down. That was crazy. I’ve never been in a game like that, where it came down to the final seconds.” Hines and Furtney are best friends. “I knew one of us was going to have to make a catch or make a play,” he said. “I was happy for him.” The Big Reds host Riverview (2-1) tonight in Milan’s first home game of the season. “It should be pretty exciting,” Hines said. “This year feels a lot like 2016 when we won the league. Last year, we were sort of expecting to be the best team in the league, but with injuries and everything, it didn’t work out.” Milan did finish 5-5 last year and made the playoffs for the third consecutive season. The Big Reds have a long and prosperous football tradition. They have made the playoffs 17 times over the years and have had some outstanding football players, dating back to University of Michigan and American Football League standout Joe O’Donnell, for whom the Milan football stadium is named. Hines looks like the next Big Red to play Division I college football. He’s received interest from several Mid-American Conference schools, from the University of Toledo to Eastern Michigan University. The University of Cincinnati has stayed in contact, and recently Indiana and Michigan State University assistant coaches have reached out to him. There are no offers yet, but Hines isn’t worried about that for now. “I know that will happen eventually,” he said. “I don’t dwell on it. I am focused on my team right now.” Hines said he’ll probably end up playing cornerback in college. “That’s where I want to play,” he said. “When I first started football, back in the third grade, I was always on defense. I loved to hit. I think defense is where I’ll be in college.” Hoskins thinks once one school puts an offer on the table for Hines, there will be a domino effect and other teams will follow. Hines just wants to keep his Big Reds in contention for a Huron League title and a playoff berth. “I’m just focused on playing football for Milan and winning,” Hines said. “That’s what it is all about. That is what makes football fun, to win.”