Tommy Scott had already played in an MHSAA championship game, winning the Division 8 title with Muskegon Catholic Central last season. Scott, like the Crusaders' other veterans, said he was more at ease this season, knowing what to expect on the big stage at Ford Field.

So, why was Scott throwing up as he came off the field in the second quarter of the Crusaders' 31-6 victory over Munising?

Something he ate Thursday didn't agree with him for the early game the following morning, but it was Munising feeling queasy once Scott started feeling better.

"I felt sick in the first half," he said. "I wouldn't let that stop me in my last game in the state championship. I wasn't coming out. After I vomited, I felt way better."

Coach Steve Czerwon quickly added, "After he saw his dad screaming at him to get back in, I think he felt better, too."

Scott said he felt fine early in the game, well enough to bust off a momentum-altering 99-yard kickoff return just 13 seconds after Munising had taken a 6-0 lead. But he started to feel sick shortly after that, finally finding relief when he threw up.

Held to 14 yards on seven carries in the first half, Scott finished with 21 carries for 92 yards and three second-half touchdowns on the ground in addition to the record-breaking kick return. The previous record was a 97-yard return by Zeeland West's Brad Mesbergen in the 2011 Division 4 final.

"We knew coming in, we had to stop Scott and their quarterback," Munising senior Andy Cooper said. "We knew their quarterback was a little bit injured. He toughed it out today and played a heck of a game. Tommy, we saw he got sick a little bit on the sidelines. He came back in and was running the ball on us; he was tough." 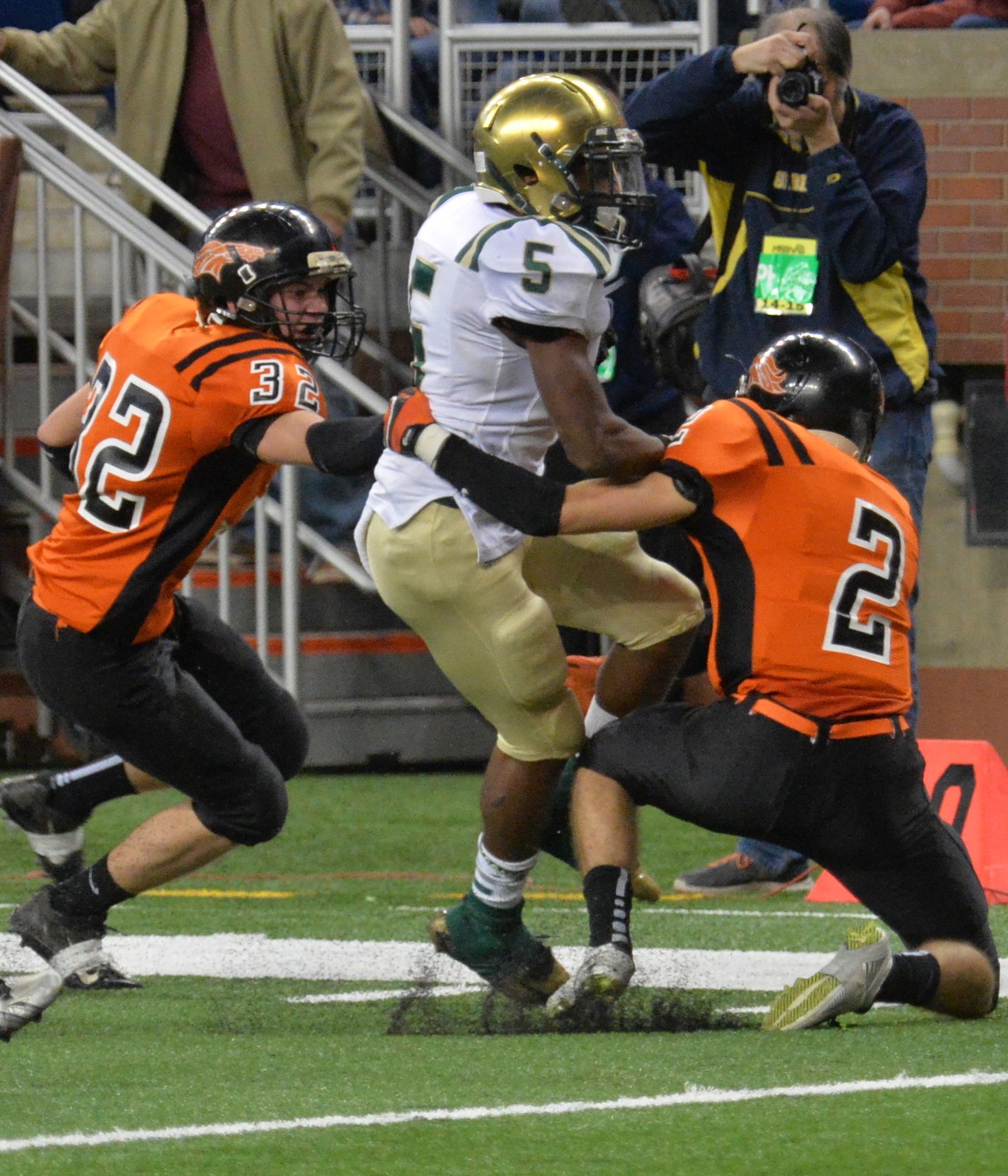 Crusaders quarterback Nick Holt has been playing at less-than-optimal health the second half of the season after spraining his ankle, an injury he aggravated in the semifinals. Holt finished with 13 carries for 61 yards and was 2 for 6 passing for 41 yards.

The Crusaders trailed for the first time all season when Cooper made a leaping catch in double coverage at the 50-yard line and sprinted to the end zone on third-and-seven to complete a 74-yard scoring pass from Austin Kelto with 10:14 left in the first quarter. Cooper's extra point was blocked.

It turned out that MCC would trail for only 13 seconds all season, as Scott turned on the jets and out-sprinted the last player back, Cooper, who won four events in last season's MHSAA Division 3 Upper Peninsula track and field meet.

"It was huge to get the momentum right back after they took the momentum in the first three plays," Scott said. "Making a big play like that can change a game."

Munising also allowed a 99-yard kick return by Beal City's Chase Rollin in a 10-7 semifinal victory after scoring a go-ahead touchdown in the third quarter.

"We were all excited after that touchdown," Cooper said. "Everyone was: the fans, the sidelines, the coaches. Then it seemed like deja vu, because it happened last week, the exact same thing. We score and they returned the next kickoff on us. We got through it and still kept our heads in the game."

The Mustangs were still in the hunt by halftime, trailing only 10-6. Seymour booted a 25-yard field goal with 2:37 left in the first half to cap an 18-play, 64-yard drive that consumed 9:16 off the clock.

MCC had a chance to extend its lead before halftime, but Blake Sanford had the ball punched out by Cooper at the 7-yard line after making a 29-yard catch. Kelto recovered the fumble, but a roughing-the-passer penalty gave the Crusaders new life at the 21. On the next play, Ben Stasewich tipped a pass by Holt, and Ian McInnis intercepted it with 24 seconds remaining in the second quarter.

In the second half, the Crusaders controlled the game with their ground attack.
They scored on their first three possessions of the half, with Scott scoring on runs of 1, 30 and 9 yards.

Any conversation about the greatest high school football programs in Michigan must now include Muskegon Catholic Central.

The only other time the Crusaders repeated was in 1991.

"To be able to say we won back-to-back, we're never going to be forgotten," Holt said. "Everyone is going to remember the 2013-14 team. Not only is it back-to-back, but we had such a big class. We had 18 starters last year, and this year it's just about everyone. This class is always going to be remembered. It's an honor and a blessing."

The Crusaders held Munising to 39 yards on 30 carries. Jaeden MacPherson had two sacks for minus-19 yards.

MUSTANGS LIGHT IT UP FIRST - On the third play of the Division 8 title game, Austin Kelto hits Andy Cooper, and Cooper converts into a 74-yard touchdown for Munising.

LONGEST KICK RETURN EVER IN A FINAL - On the kickoff following the Munising score, Muskegon Catholic Central's Tommy Scott goes coast-to-coast - 99 yards - for the longest kickoff return in an MHSAA Football Final. Scott ended up scoring four times and rushing for 96 yards.

Watch the game in its entirety and order DVDs by Clicking Here.