ALGONAC — Algonac has been home for A.J. Garshott since he was 5 years old.

Yet, it's like he's living in an entirely new town this fall.

"I honestly have never seen Algonac like this in my entire life," the Muskrats' senior quarterback said. "It's completely different. You drive through town and every sign has stuff about our football team on it. There's signs in every yard. The fan base is unreal, how many people come to our games now. Last year, there'd be half the bleachers full. Now it's only standing room."

Football can have that impact on a small community.

"It's been overwhelming, to be quite honest, with the number of people who have gotten together, maybe because of the football team," Algonac coach Scott Barnhart said. "But they've renewed their enthusiasm for the community. The atmosphere around here is electric. Every business in town has 'Go Muskrats' up on their sign. I've been introduced to people who have come out and watched the team play who haven't been to a game in years. That's a great feeling for our kids and their parents. The people out there come away with a good feeling about the education their kids are getting here in town. It all feeds on itself."

The heightened sense of pride in this town which sits along the St. Clair River across from Canada stems from one of the most remarkable turnarounds experienced by any football program in the state.

Algonac is one of 38 teams during the 41-year MHSAA playoff era to win at least eight regular-season games one year after losing at least eight games. Hesperia also had a remarkable turnaround this season, going from 1-8 to 9-0. (See all 38 teams below.)

The 2014 season was all too typical for Algonac, as the Muskrats stumbled to a 1-8 record. It was the 19th time in the last 22 years that Algonac had a losing record, the only exceptions being a three-year run from 2004-06 in which the school had its only two playoff appearances and went 19-10.

It took only one night to let Algonac and the entire Port Huron area know that these were not your father's or your big brother's Muskrats.

Algonac opened the season with a 19-18 victory over Marine City, taking the lead with 36 seconds left on a 19-yard pass from Garshott to Luke Stephenson and sealing the deal with Joe McKee's second interception of the game.

Marine City was a huge hurdle for the Muskrats to clear. Algonac had lost 15 straight times to the Mariners, last winning 12-0 in 1986. Marine City, the 2013 MHSAA Division 4 champion, would bounce back to qualify for the playoffs for the 18th straight year.

"That was a huge confidence booster," Garshott said. "They've been the best team in the area. Coming out, they were thinking we were the old Algonac and we came out on top. It was a really cool feeling, especially to throw a touchdown with (36) seconds left."

"It was huge to come out in Week 1 and compete with a team as good as Marine City," senior defensive end Mason Ruhlman said. "We not only compete with them, but beat them. It was an unreal feeling."

For the Muskrats, the victory was an affirmation that all of their hard work in the offseason would pay off.

"We definitely saw improvements over the summer," Ruhlman said. "Guys were working out. The numbers were a lot better. We actually had guys showing up. In the weight room, we had 25 guys coming, compared to last year we had seven or eight guys."

Beating Marine City would've been the highlight of the season for past Algonac teams, but the Muskrats had much more in store for their fans as the season unfolded.

With consecutive shutouts over Imlay City, Armada and Yale in Weeks 3-5, the Muskrats had three straight shutouts for the first time since opening 1968 with three in a row. Algonac hadn't posted back-to-back shutouts since 1991.

Following a 28-0 shutout over Yale, the competition got tougher over the next three weeks. Algonac was down 21-7 in the second quarter against Croswell-Lexington, an eventual playoff qualifier, before scoring the final four touchdowns in a 33-21 victory. The following week, the Muskrats fell behind 7-0 in the first quarter against another playoff qualifier, Almont, before shutting out the Raiders the rest of the way in a 21-7 victory.

Algonac went into Week 8 with a perfect season and outright Blue Water Area Conference title on the line, but lost 15-14 to a Richmond team that finished the regular season with an 8-1 record.  Richmond took a 15-14 lead on a 92-yard kickoff return by D'Sean Hamilton before halftime. The teams played a scoreless second half, with Algonac's fourth turnover of the game ending a promising drive late in the fourth quarter. 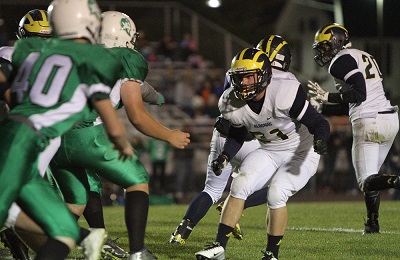 "It was just terrible," Ruhlman said. "We worked so hard, then it came down to the wire and we just didn't come out on top. We battled and showed a lot of good things in that game as a team. We had a lot of guys battle through some stuff. There were positive notes in that game."

By beating Brown City, 50-27, last Friday, the Muskrats had eight regular-season victories for the first time since the 1972 team went 8-0. Algonac was 8-3 in 2004, winning a playoff game against New Haven.

The Muskrats will open the MHSAA Division 5 playoffs at home at 7 p.m. Friday against Clinton Township Clintondale. If Algonac wins, it will have a rematch with Marine City or Almont in the district final.

The Muskrats have been looking forward to the playoff atmosphere since clinching a berth with three regular-season games remaining.

"It's been 10 years since they've been in the playoffs, and we won our first league title since 1972," Barnhart said. "We stopped to smell the roses briefly and talked to the kids about that. They and their parents all have questions about the playoffs and how this business works with points and matchups. We took a little bit of time to talk through that with people. Then we had to stop and get business taken care of."

How did a team that finished so badly a year ago become so dominant this season?

First off, there were some extenuating circumstances that contributed heavily to that 1-8 record in 2014.

The Muskrats started eight sophomores last season. They lost their leading receiver, rusher and tackler to lengthy injuries. One key player from this year's team was ineligible last year, while another who "was making some poor decisions" has turned things around to be a key part of this year's success. Garshott got a year of experience as a starting quarterback as a junior.

"You tally all of those things together and we were not as bad a team last year," Barnhart said. "The leadership this year has been phenomenal. I do think that has made a huge difference.

"The kids have been very confident in what they've done to prepare. I don't mean it to sound like an arrogant statement, even though it kinda does, but if you ask any coach going into a season, there's great enthusiasm and excitement of the unknown. If you do it right, I don't think it should surprise you very much."

Algonac has outscored opponents 321-95, breaking the school scoring record of 300 points set in 11 games by the 2004 team. The average of 10.6 points allowed is Algonac's lowest since the 1972 unbeaten team allowed 6.4 points per game.

Garshott is 68 for 135 passing for 1,175 yards, 12 touchdowns and four interceptions. He has run for eight touchdowns. His leading receiver is senior Owen Kaatz, who has 25 catches for 526 yards and five touchdowns.

Junior Joe McKee has run 79 times for 406 yards and seven touchdowns, to go with 12 catches for 163 yards and a touchdown.

The defense has not only shut down opponents, but has scored four touchdowns and a safety. Ruhlman has returned two fumbles for touchdowns.

Sophomore middle linebacker Luke Stephenson has a team-high 65 tackles. More impressively, he is one of the team's four captains along with seniors Ruhlman, Garshott and linebacker Tom Goldenbogen.

"I've never had a sophomore captain before and don't think I ever will," Barnhart said. "He's got all the intangibles. It's attitude, discipline, work ethic, all of those things you want your captains to have. We've had seniors with all of those things that just don't have their teammates respond to them. It's an intangible thing to see how kids respond to some of the would-be leaders on your team."

"It was rough last year," Ruhlman said. "We didn't really have anything to look forward to. It was still awesome to be playing football, but it's completely different this year knowing we're going to the playoffs."