MAPLE CITY – With school about to begin, Glen Lake will be hosting perhaps its biggest event of the school year tonight.

Perennial power Traverse City St. Francis heads up to Leelanau County to take on the Lakers in a Week 2 football showdown.

Glen Lake, a 42-20 winner over Kingsley in last week’s season opener, is coming off an 11-3 campaign that ended in the MHSAA Division 6 Final at Ford Field. The Lakers lost the title game to Jackson Lumen Christi 26-14.

St. Francis, a 21-7 victor over Marquette last weekend, finished 11-1 a year ago, losing to eventual Division 7 champion Pewamo-Westphalia 17-14 in the Regional Finals.

“Anytime you play St. Francis – it doesn’t matter if you play them on the beach – it’s a big game,” Lakers coach Jerry Angers said.

The two teams will not be playing in the sand tonight. They’ll be playing on Glen Lake’s new synthetic field, which workers put the finishing touches on to meet a down-to-the-wire deadline this week.

The field is the latest positive for the Glen Lake program.

The school board considered installing a new natural grass field, but opted for the artificial turf because of its “usability.”

“Once you accept the premise that the football field needed to be replaced, it wasn’t that much of a leap to go to artificial turf (over natural grass) given how much more we can use it,” superintendent Sander Scott said. “Usability – that was the determining factor.”

The field will be used by other sports teams as well as physical education classes.

“That’s the beauty of it,” athletic director Jennifer Johnston added. “Our entire student body and community can reap the benefits of having a field like that.” 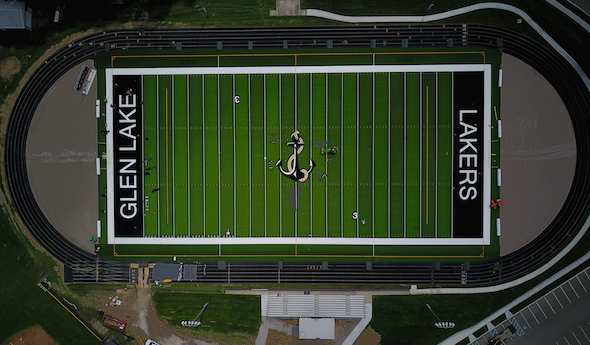 The school board approved spending nearly $850,000 on the surface, but Scott said “it’s looking like it’s going to come in well below that.”

“We’re aware of the challenges Thirlby Field has had (with its synthetic surface), so we really made sure we did not duplicate whatever mistake that was done there,” he said. “We probably overbuilt for drainage.”

The field is not the only new enhancement fans will notice tonight. Officials “beefed up” the wireless network at the field and brought back the berms on the home side for those who prefer lawn seating to bleachers.

The upgrades add to the momentum that’s building in the athletic program. Glen Lake was named the Traverse City Record-Eagle’s School of Year in 2016-17 after the football team reached the MHSAA Finals and the girls basketball team the Semifinals. In addition, Nichole Cox won a third consecutive individual MHSAA Finals golf championship.

“We’re on an upswing,” Angers said. “Everybody is upbeat.

“I know we savored it (last year’s football tournament run). Hopefully, it will fuel us this year – and in years to come.”

Johnston said her message to fall coaches was “keep doing what you’re doing because it’s working.”

“We have a vision and that’s to work hard to improve every day with pride, class and integrity,” she added.

It’s that motto that the school emphasized in ads that ran in the Record-Eagle fall sports tab and in the Leelanau Enterprise.

“We wanted to promote and brand our athletic department,” Johnston said.

Still, Johnston noted, the school has goals other than winning for its student athletes.

“We want to prepare our students to be successful in the real world and contribute to society in a positive way,” she said. “We have high expectations on the playing field, but it starts in the classroom.” 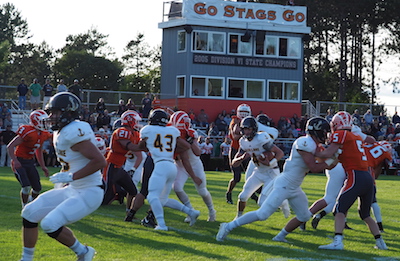 Speaking of the classroom, Glen Lake is on a roll there, too. The school conducted a search this summer for two secondary math teachers with proven records of increasing student achievement. The school even offered a signing bonus. Forty-six teachers applied, compared to 14 for a similar position at another local high school.

Glen Lake ended up hiring two teachers with more than 20 years of experience.

“The one thing we do that distinguishes us from other schools,” Scott said, “is that we will give teachers credit for all their years. When I was part of other districts, the highest they typically go is six years. If you’re a teacher with 20-plus years, you’re not going to take a huge pay cut to move. We wanted to eliminate that (obstacle). We just posted an elementary opening and had 153 applicants.”

For Johnston, she had another reason to celebrate the 2016-17 sports season. Her father, Roy, who coaches basketball at Beaverton, became the state’s all-time winningest coach in that sport last winter.

“I was really excited for him,” she said. “He’s definitely stood the test of time. He’ll be the first to tell you that you’re not put in that position, to reach a milestone like that, without a lot of good players and without the support of a great community and school. To me, the entire Beaverton community earned that accolade.”

When Glen Lake was making its run to Ford Field last fall, Johnston was quick to mention to Angers that he should enjoy every minute of it.

“I said, ‘Jerry, you have to realize my dad’s been coaching 46 years and the furthest he’s made it is to the Semifinals,” she said. “You never know. (The Finals are) quite an accomplishment. Enjoy it to the fullest.”

One game into the new season, Angers already is raving about the support his team is receiving from the student body and community.

“The crowd we had at Kingsley was unbelievable,” he said. “And I expect it will continue to grow.” 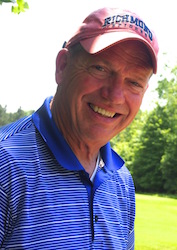 But for all the good cheer, Glen Lake is also without a familiar face this season. Paul Christiansen stepped down as girls golf coach after last season, ending a coaching career that started at the school in 1973.

When Christiansen started in the fall of 1973, he was an assistant varsity football coach and boys JV basketball coach. By the next year, he had become the head football and boys varsity track coach, in addition to coaching JV basketball for his close friend Don Miller.

“After the second year, our superintendent said three (coaching jobs) is too many, especially with two as a head coach at the varsity level,” Christiansen recalled. “He said, ‘I don’t care which ones you do, but pick two. I think you’ll be better off.’”

Christiansen gave up football. But he later picked up a third sport again when he coached girls middle school basketball. He would end up coaching boys JV basketball for 25 years and boys and girls varsity track 20 years apiece. In all, he coached 92 sports seasons at Glen Lake.

“I didn’t script it that way, but if you were to script it, going out with an individual or team championship would be the way,” he said.

Glen Lake had just three golfers last season, not enough to compete as a team. The school dropped the sport this season.

“For Glen Lake to allow us to keep competing (last season), even though we didn’t have a full complement of players to count as a team score, I was really thankful for that,” Christiansen said. “And Nichole was especially thankful.”

Cox’s title was part of a “wave of success” that highlighted the last school year.

But this is a new year. New teams. New challenges.

Angers, for one, is hoping to keep that momentum rolling, although he lost some talented players to graduation, including eight defensive starters.

“The key is you want to retool (not rebuild) every year and I think that’s where we are right now with the program,” he said.

St. Francis will be a good test.