MARQUETTE — In the end, the encore wasn't that much different than the first title run for the latest Powers North Central powerhouse team.

The Jets got off to a fast start en route to a 63-0 win against Colon to repeat as MHSAA 8-player Division 2 champions Saturday. Last season, many of the same standouts led North Central to a 70-48 championship game win over Portland St. Patrick.

"Oh gosh, it just feels great," Powers North Central head coach Leo Gorzinski said. "Like I've been telling these guys all week, we come this far, we work this hard and let's finish it. And that's been the rallying point all week. We talked about all the time people didn't work. They were in a weight room since February, two-a-days in August. So they weren't going to let this one slip away. But it's a great feeling."

Saturday's title adds to the Jets' 8-player football championship pedigree with go-to athletes. This championship also was the their fourth in seven years.

"I want to thank all the guys that come before us," Gorzinski said. "Once they showed it can be done, everybody started believing that it was possible. And then once they believed it, now they want to be the ones to let it go. We've got a pretty good thing going right now."

The 2021 season will go down as one of the most dominant in Michigan 8-player history. Through 13 games, the Jets outscored opponents 745-43, an average game score of 57 to 3.

The details of Saturday's win hinted at the athleticism and depth that spurred the Jets on. They had 620 yards of offense. Colon had 126.

Colon received the kickoff to start the game, and the Jets' defense set the tone with three straight tackles for loss and forced a three-and-out from Colon's 4-yard line.

The Jets' potent defense went on to hold the Magi rushing game to minus-14 yards on 20 carries.

Saturday also spelled the end to Colon's Cinderella run. The Magi had beaten undefeated teams in every round of the playoffs except Saturday.

Junior quarterback Simon Vinson went down with an injury with 1:01 remaining in the first quarter. Magi head coach Robbie Hattan said Vinson's injury changed the mood on the sidelines.

"Losing Simon, when Simon went down, some kids put their heads down and they couldn't bounce back from that," Hattan said. "I'll give my kids credit. The second half they battled, we played much better in the second half defensively. A lot of the kids struggled getting used to the heat here. Right away they're cramping, and somehow our Gatorade was left on the bus and the kids couldn't refuel. It just was a weird day for us."

Powers North Central senior running back Wyatt Raab scored both touchdowns to open the game, from 15 and 30 yards out, respectively. He finished the day with 101 yards on five carries (20.2 yards per carry).

Luke Gorzinski led with a game-high 125 yards on 15 carries (8.3 yards per carry) and a touchdown. 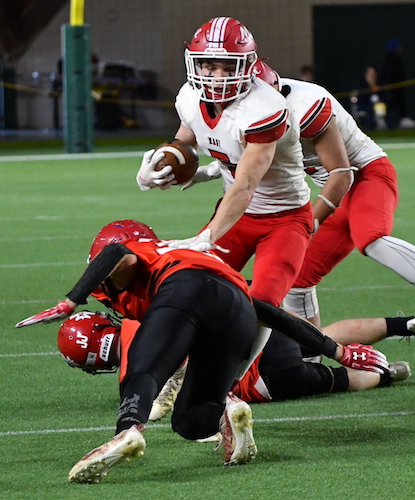 Colon (11-2) started drives deep in its own territory early on, and were forced to punt. Their average field position to start a drive was their own 27-yard line.

Holding the Magi deep in their territory meant the Jets had a short field for most of the day, leading to a quick succession of scores. North Central had 369 yards of total offense in the first half alone.

Powers North Central rushed for 236 yards on 20 carries with four TDs in the first half and led 49-0.

North Central executed as efficiently as it had all season. The Jets moved the chains all game while their defense prevented Colon's offense from doing the same.

Gorzinski had two sacks and 10 tackles. Drew Webber had six tackles. Caden Tietz, Drew Allgeyer and Lane Nehring each had a sack. Owen Eichmeier had an interception.

"They're so competitive with one another — it's our depth" Leo Gorzinski said of the defense. "We've got so many kids that are the same caliber, same type of athlete. So day in and day out they're fighting for every single position. They want to show Coach 'l caught it over so-and-so, tackle over so-and-so.’"

Saturday was the Magi's second Finals appearance in three seasons after winning the 2019 Division 1 championship against Suttons Bay. The Magi lost in the Regional Finals in 2020 to Portland St. Patrick, which then lost to the Jets in the Final.

Hattan said there were naysayers even within Colon as the team made its playoff run. That, and falling a game short of a championship, is a motivator for next year, he said.

"Nobody expected us to be here. Even some people in our community were 'It's a rebuilding year,'” he said. "We lost, we only had two returning starters on offense, two returning starters on defense. Nobody expected us to be here. We return a lot of players (next season). We graduate like six seniors, three of them that were starters. We have some holes to replace, but we return a lot of kids. Now, this is motivation for some of our guys to get bigger, faster, stronger.

"They understand where they’ve got to work now to bring us back here and get to the next step, which is winning the state championship."