GREENVILLE – The photos Powers North Central football players took Friday night after winning the first MHSAA championship trophy in program history were finishing touches on arguably the most impressive run yet during the short history of 8-player football in this state.

Although the 8-player format is only half a decade old, it’s fair to surmise Michigan may not see an offense as potent as North Central’s for years to come – at least until the Jets take the floor this basketball season.

Sure, North Central was held to its season low in points Friday. But given the opponent and the stage, the Jets did more than enough to impress in defeating previously-undefeated Battle Creek St. Philip only 58-33 after scoring at least 64 points in every other game this fall.

North Central (13-0) ended this season, it’s first as an 8-player program, averaging 70.4 points per game. That was only half a point less than the basketball team, featuring many of these same players, averaged in winning the Class D title in March.

“When you go into a season, you know what you have and you know what you need to work on,” said junior quarterback Jason Whitens, who also was the basketball team’s leading scorer last winter. “With the group of guys we’ve got, we all love each other, we’re close-knit just like basketball, and we love to work hard. We come out here and perform and just work hard.”

North Central finished 13-0. Before St. Philip came within 25 points, no opponent had come closer to the Jets than 48.

A few key decisions gave them the momentum for such a dominating run. 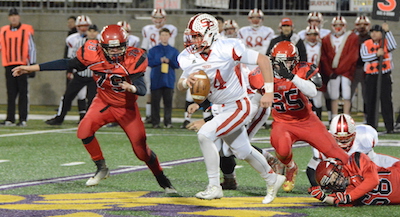 First came the decision to move to 8-player. North Central had had recent success in 11-player, making the playoffs three of the last five seasons and finishing 8-3 in 2013. But enrollment dropping to 119 students this fall justified the move.

Then came another switch. Whitens, a receiver last season, moved to quarterback to take over for his graduated cousin Rob Granquist after formerly serving as one of Granquist’s top targets.

Whitens threw for 217 yards and two touchdowns Friday, giving him 2,532 yards and 45 touchdown passes without an interception this fall. It’s a good argument, which was more incredible – the zero interceptions or that 25 percent of his 179 passes went for scores.

His development was quickened by work with cousin Granquist, but also by another sharp decision by coach Kevin Bellefeuil, who decided to keep the same offense as when the team was 11-player but drop the tackles and a slot receiver.

Still, St. Philip nearly wrote its own storybook ending as it sought its first football title since 1985.

The Tigers scored first – the first time North Central had trailed this season – and led by as many as nine points before a pair of plays changed the game’s course.

Holding a 21-20 lead with 2:15 left in the first half, St. Philip chose to go for a first down on 4th-and-1 from North Central’s 34 yard line – and was stuffed for a 3-yard loss by junior Tanner Poupore with help from a few teammates.

On the next play, Whitens dropped a 63-yard touchdown pass just over the shoulder of junior running back Bobby Kleiman, who outran a defender for the go-ahead score. 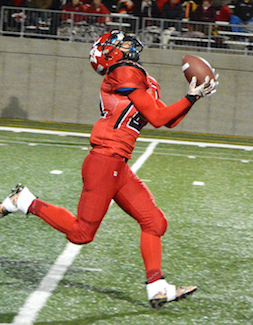 Less than two minutes later, junior Dawson Bilski intercepted a fourth-down St. Philip pass again in North Central territory. With 30 seconds left in the first half, Whitens led a 56-yard drive that included 28 and 34-yard passes to Kleiman and ended with Whitens scoring on a 1-yard run with a second left in the half.

“They just had a ton of weapons and speed that we couldn’t contain, and that was the ballgame,” Tigers coach Dave Downey said. “Once we get down, we’re pressing. We’re throwing the ball a lot more than what we probably should have. We like to run the ball a little bit more. When we went to the air, they defended the pass pretty well and they got to our quarterback quite a few times, and that was the difference too.”

The North Central defense did give up a season high in points, but those 33 were also a season low for the Tigers. St. Phil did end up with 380 total yards – senior running back Brayden Darr ran for 104 and two touchdowns despite plenty of North Central attention, and senior quarterback Brendan Gausselin threw for 172 and two scores – but St. Philip couldn’t make up for a pair of interceptions and the Jets’ 572 yards of offense.

Darr also had 13 tackles to lead the Tigers, and Bilski had a team-high 12 for North Central.

Kleiman rushed for 205 yards on only 21 carries, good for an average of nearly 10 yards per attempt. He ran for five touchdowns to go with the sixth through the air.

Bilski and Kleiman are two more of six starters on the Jets’ offense who have another season to play. After averaging 70 points a game and dominating most of all 13 wins, what could be next?

“Keep working hard and just have fun,” Whitens said. “We’re in high school, having the time of our lives right now and doing things we love. We’re ready for next year, and I’m very excited.”