PETOSKEY – Petoskey kicked off a new era in football last Thursday with the unveiling of Northmen Stadium, a multi-use facility that will be home for football, soccer, lacrosse, band and track & field.

More than 4,000 spectators turned out on a beautiful late August night to watch Petoskey open its season against Ada Forest Hills Eastern. School officials believe it was the largest home football crowd in Petoskey history.

Even a 35-14 setback could not dampen the enthusiasm and pride displayed by those in attendance.

“To see the stadium from the road is one thing – and that excited people,” Superintendent John Scholten said. “But once they got inside and saw it first-hand, there was an awe factor. It was like, ‘Wow!’”

Northmen Stadium replaces Curtis Field, which was built in 1927 and served as the home for Petoskey football for 88 years.

“Our community is very tradition-oriented, very values-oriented,” Dan Ledingham, president of the football boosters, said. “Curtis Field means a lot to us. It’s very symbolic – the roots from where we started. Multiple generations played on that field. I know families who go three to four generations deep. But it was time.”

“It’s time” was actually the theme for the $10 million bond proposal that the electorate approved by a 64 to 36 percent vote in 2014.

“It (Curtis Field) served the community well, but it was pretty tired,” Scholten said.

In addition to the $10 million bond, the school received significant donations and coordinated efforts with other sinking fund projects.

“The whole (campus) renovation is closer to $15 million,” Scholten said.

It’s all part of a concerted effort to bring the school’s athletic facilities – once scattered around the city – to the campus location. The school had already built a stunning new high school gymnasium and an on-site baseball field.

“When I moved up here (from Maple City Glen Lake) two of the old icons from the Glen Lake days, Denny Dame and Ivan Ford, said you’re moving to the nicest gym in the north,” Scholten said. “I’m a little biased, but I think we now have one of the nicest football facilities in the north, too.” 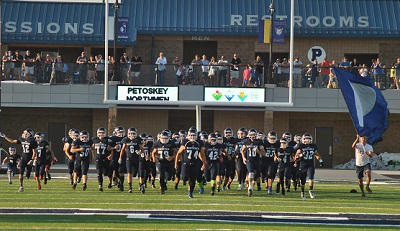 The stadium is the centerpiece of the latest project. The property’s topography featured a “semi-natural bowl” on the southeast side. Construction workers moved 300,000 cubic yards of dirt to build up the other side, creating a complete bowl appearance.

“The fact it sits down in a bowl makes it unique,” athletic director Dave Smith said. “There are lots of places that have nice stadiums, but they’re flat and the bleachers go up. With this, there’s not a bad seat in the house because it sits down in that bowl.”

The main entrance is near the mezzanine in the north end zone, which is where the concessions and restrooms are located. It features a plaza that overlooks the field. A tunnel runs underneath the mezzanine where the players and band enter and exit the field.

“It’s a very cool place to see a game,” football coach Kerry VanOrman said. “When the band marches through the tunnel, it’s like you’re at Michigan State or Michigan.”

Team rooms, a training room and an officials room are located off the tunnel.

A 40-foot video scoreboard anchors the south end zone. There’s also a messaging board attached to the mezzanine.

The synthetic turf is lined for football, soccer and lacrosse. The soccer team opens its home season Tuesday.

The stadium seats 2,950, but there is additional lawn seating on the hillside. Plus, based on opening night, fans seem to enjoy watching from the mezzanine.

“That elevation overlooking the field gives you the best view,” Ledingham said. “You can see everything, and you can feel the energy coming from the crowd.”

Workers scrambled to get the stadium ready for opening night. In fact, just 48 hours beforehand Ledingham wondered if it would be game ready. 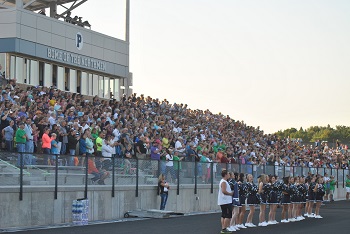 “There were tractors and trucks, concrete and tiles,” he said. “Everything was everywhere. It looked like a true construction site that maybe in a month would be close (to done). I was wondering, ‘What’s Plan B?’ Kent (Cartwright, the school’s chief financial officer) said, ‘There is no Plan B. We are on this field.’ It was neat to see it all come together.”

“It was unbelievable the number of people there, from the construction crew to the subcontractors, working extra hours, late hours, that last month to make sure we could get in there and play on that (Thursday),” he said. “Two days out, I was also wondering how this is going to happen. But it did.”

The school received a temporary occupancy permit to open the stadium. Finishing touches were still being completed this week.

The opening culminates nearly 10 years of work. A bond proposal to fund separate football and soccer stadiums was rejected by voters in 2007.

“We had a nice plan,” Scholten said, “but it was just when the recession was starting. We did all the pre-work with the surveys and it looked like the confidence was there, but when the economy went south, (the vote) went south, too.”

Officials regrouped and, after the lingering recession ended, pared back the plan and took it to the voters.

“It was unfortunate timing (in 2007),” VanOrman said. “They were smart in waiting for things to pick up. They did a good job planning it, locating it and even tying it into the city walkways. It kind of includes everybody into it.”

Officials changed the location of the stadium, building it on what was two practice fields so it could utilize existing locker rooms and showers at the school. Two additional locker rooms will be added.

“We listened to the community,” Scholten said. “We were a little extravagant (in 2007) so we came back with a different plan. We worked real hard to say, ‘We listened to you, we trimmed it back, we feel we’re being responsible.’ We worked hard to build that confidence back up.”

The cross country trail will facilitate skiers as well as runners and walkers. The new eight-lane track replaces the outdated six-lane version at Curtis Field.

“We couldn’t host anything big because of that,” Scholten said. 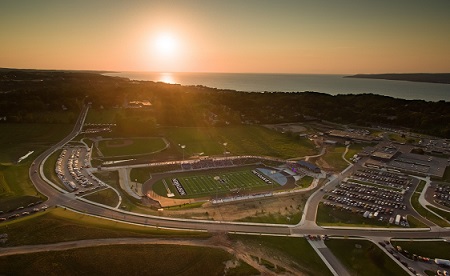 Parking, an issue at Curtis Field, was addressed, too. Spectators can now use the high school and middle school lots, as well as new parking spaces near the stadium.

The improvements now leave hockey and downhill skiing as the only sports played off campus, Smith said.

“From an athletic director’s standpoint, I love how most of our facilities are now on school grounds,” he said.

“It was amazing to see our community come together to enjoy it,” he said.

The unveiling attracted fans from nearby communities as well.

“The energy and support was great,” junior kicker Noah Ledingham said. “You run on to that field, see the lights, see (the crowd) and it just makes you want to play harder.

“To be the first team to play on that field is an amazing feeling because it’s a new chapter (in Petoskey football) and you know you’re making history.”

The Northmen, with just two key returnees back, struggled early, falling behind Forest Hills Eastern 28-0 before rallying to make it a game.

“I was pleased with the way we played in the second half,” VanOrman said. “It was 28-14 with 3:30 left in the game. We went for an onside kick and it blew up in our face. They recovered and ran it back to our 15 and then scored. (Eastern’s) a good football team. It was a good measuring stick for us to see where we have to get better.”

The night might also pay dividends. Forest Hills Eastern officials are talking about extending the two-year deal with Petoskey that is set to expire after the Northmen travel down there next season.

“They liked it so much they want to come back in two years,” Smith said. “I would say that’s a compliment right there.”

PHOTOS: (Top) Petoskey's stadium, at dusk, hosted Ada Forest Hills Eastern for its debut. (Middle above) The Northmen take to their new field for the first time. (Middle below) Fans packed the home stands, which are part of a "bowl" circling the playing surface. (Below) The new football field is just one part of the renovated Petoskey athletic complex. (Aerial photos by Charles Dawley/Up North Imaging. Game photos by Scott Moore.)