Jack Schugars led five Muskegon Oakridge teams to MHSAA football championship games during his 32 seasons running the program. He finished his high school coaching career in 2010 with a record of 262-78.

And of course, he impacted hundreds of lives in a community that, according to a former assistant, considers him a "saint."

Schugars was honored last week with the Duffy Daugherty Award for his outstanding achievements in high school football. Each spring, the Duffy Daugherty committee – made up of football supporters and media from the Lansing area – recognizes a high school coach along with a past or current college coach. The college award is among those recognized by the College Football Hall of Fame.

The Schugars family is rooted in education. He also taught biology at the high school for 38 years, while his wife Julie taught English. Their daughter Amanda teaches in Battle Creek, and son Eric teaches and is the defensive coordinator at Traverse City Central.

Below are brief excerpts from the introduction of Schugars by his former football assistant and current Oakridge softball coach Joe Coletta, followed by Schugars' closing words of wisdom.

(Coletta) “To Jack, those are not just words of hollow meaning. They are his compass. 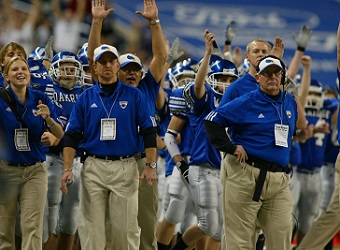 “Jack has won countless awards for his accomplishments on the football field. He absolutely refused to let anyone outwork him or his teams in preparation for a football game.

“But in my opinion, his strength as a football coach is his ability to take a kid that most people would give up on: a kid that some might label as no good, troublemaker, not worth the effort. He found a way to love the unlovable.

“He would give those kids direction; he would mentor them to be young men and young women and take them to where they could not possibly take themselves.

"When you can do that for a person, you let them see their worth as a human being and make a lasting impact so you can change the rest of their lives.

“That, to me, is what sets Jack apart from most coaches.”

(Schugars) “The reason I'm on this Earth is to love the Lord your God with all my heart and soul and love your neighbors as yourself.

“So when I speak at clinics, when I talk to coaches, I tell them the greatest thing they can do for their team is to love their players.

“That is the greatest thing a coach can do. Love your players and be true role models each day.

“I could not ask for a better career than when ... a (former) player in the Navy Seal team calls me Coach. Lawyers, doctors, bankers, they call you Coach.

"Wow, that's a great word: Coach. That's what it's all about. Being a coach. Building relationships that will last a lifetime.

"I love the hundreds of players that are part of the Oakridge football family. And I hope I continue to build men out of boys, continue at the college level."

PHOTOS: (Top) Former Muskegon Oakridge football coach Jack Schugars holds up the 2005 Division 5 championship trophy with his players after their victory at Ford Field. (Middle) Schugars (right, with headset) monitors his team's play on the field against Jackson Lumen Christi.