Max Price is right – Muskegon Catholic Central football is back.

Not that the Crusaders ever went too far away. But after winning four consecutive Division 8 titles from 2013 to 2016, failing to make it out of Districts the past three seasons felt like a 100-year drought to Price and his teammates.

“I feel like this is the way we should be playing here at Muskegon Catholic,” said Price, the three-year starting senior quarterback who has his team at 5-0 and ranked No. 2 in the latest Associated Press Division 6 state poll.

“We were down, no doubt, but now we’re back up and ready for the playoffs.”

MCC has one more hurdle to clear to complete its first unbeaten regular season since 2016 when it hosts Holton at 4 p.m. Friday.

The Crusaders are doing it with defense, allowing a total of 18 points over five games. But even that low number is misleading, as the defense has only allowed one TD from scrimmage (a 79-yard run against Ludington), with the other points coming on an interception return and a kickoff return.

While the defense has been reminiscent of those MCC championship teams, one big change is that the Crusaders are now competing in Division 6 because of a cooperative agreement with nearby Muskegon Western Michigan Christian.

As a result, MCC appears on a collision course to host top-ranked Montague in a Division 6 District championship game next month – which would be a showdown between a pair of three-year starting quarterbacks in Price and Montague’s Drew Collins.

Ironically, MCC’s recent gridiron struggles can be traced back to its first-ever meeting with Montague during the 2017 regular-season finale. The Crusaders came into that game with a 27-game winning streak, but suffered a humbling 34-10 home loss. That game was followed by a lackluster 42-20 win over Decatur in the Pre-District, before a season-ending 26-15 loss at Mendon the following week.

“We started 10 underclassmen and five freshmen in 2018,” said eighth-year MCC coach Steve Czerwon, whose team finished 3-6 that season. “There’s a lot of JV teams that don’t start five freshmen. I’m as proud of that team as any I’ve coached because of how they hung in there, and now we’re seeing the fruits of that this season.”

Price was thrust into the starting quarterback role as a sophomore and took a pounding behind a small and inexperienced offensive line. He played at less than full strength most of that season and missed the final three games when it was discovered that he had three fractured vertebrae in his spine.

“Looking back, I was scared back there and really didn’t understand the quarterback position,” said Price, who helped MCC flip its record to 6-3 last season. “I was new, and the game was so fast. I am very comfortable now, and that’s a huge thing.” 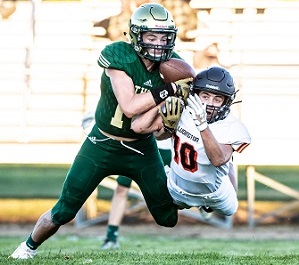 Price (5-foot-11, 175 pounds) came out this fall flinging the ball around in the Crusaders’ opening win over Ludington, completing 10-of-13 passes for 212 yards and three touchdowns.

But for those worrying that the quintessential running football team has gone pass-happy, no worries. Since that game, MCC has settled into its running ways, with Price passing for just 235 yards and one touchdown over the past four games.

The Crusaders are back to pounding teams on the ground behind an offensive line that has grown bigger and more experienced under the direction of veteran line coaches Mike Ribecky, Joe Perri and Mike Hornak. Guard AJ Lock (6-1, 220) is still the lone senior starter on the interior line, with the other four being juniors – tackles Jaden Johnson (6-4, 235) and Alex Barnhill (6-0, 260), guard Jack Heminger (5-10, 210) and center Landon Patterson (6-0, 220).

The real secret of this year’s team is a stable of talented and interchangeable backs, led by senior Tommy Kartes and junior Joe Waller. The other backs getting significant touches are all underclassmen – juniors Nick Powell, Dane Rutz and Eliot Riegler.

“We were still in the first quarter last week against Orchard View, and seven different kids had touched the football,” said Czerwon. “I don’t think this team has any superstar on it. Quite frankly, we have a lot of kids of equal ability – we have a lot of good, solid players.”

The first to touch the ball each play is Price, who then distributes the ball around.

Price is thankful to be playing at all, after the COVID lockdown wiped out his junior baseball season this spring and a team that many believed was poised to make a run at an MHSAA Finals championship.

He is also thankful to be healthy. Price likely appreciates his health more than most his age because of the health issues of his father, Paul, who was paralyzed in 2015 after a fall at their home.

“I was in middle school when that happened, and I wondered if I should even play football with all the risks,” said Price. “But I know he wants me to follow my passion and be out there. He is a motivation for me, and I love seeing him on the sidelines at our games.”