Twenty years ago this fall, Traverse City Central and Traverse City West faced each other in varsity football for the first time as new communities created by the split of the former Traverse City High School.

As was inevitable, the resulting rivalry has become one of the state’s most competitive, with West holding a 12-7 edge in varsity football after winning the first four games of the new series. But an idea five years ago to make the game about more has given an entirely new meaning to the annual neighborly get-together.

The “Patriot Game” was an idea first stoked by West football coach Tim Wooer, who suggested a military salute game in 2012 after the death of U.S. Marine Justin Hansen, who had been serving in Afghanistan and was one of Wooer’s players when the latter formerly coached at Kingsley.

Historic Thirlby Field was packed with 10,000 fans for that first Patriot Game, played Week 6 that fall. And it was just a start.

The Patriot Game has grown to also honor first responders, including police, fire and medical personnel, and for more reasons than football has become the game for the 3,000 students who attend either Central or West.

In their words, two of those students – Central senior Sarah Berry and West senior Dani Priest, the governors of their school’s respective student senates – explain why the Patriot Game has grown to mean so much, and also what it says about their communities.

Both Berry and Priest have attended all four Patriot Games, and of course will be on hand tonight after a full day of festivities at both schools. (Watch the game live with subscription on MHSAA.tv.) The game again is played at Thirlby, which is the shared home of Central and West as well as Traverse City St. Francis and has been hosting football games since 1896.

Priest: “My favorite memory of the Patriot Game was freshman year. Thirlby Field in itself is just a field where not many high school kids get to experience (that kind) of opportunity, because it an incredible thing that we share between the schools. The stands were completely filled, it was my first-ever high school football game, it was under the lights, it was 500+ kids from West, 500+ kids from Central. The whole community (went) back and forth, back and forth, the game was incredibly close and then West ended up winning (17-14). That was the only game since I’ve been in high school that we’ve won. The feeling after that was incredible especially because I was a freshman and it was new; there were no words. … Especially since our community is so intimate and small, that adds another component. No matter what, because we’re in the same conference, we’re going to play each other. But what is so important about the Patriot Game itself is the students are so involved in this game.” 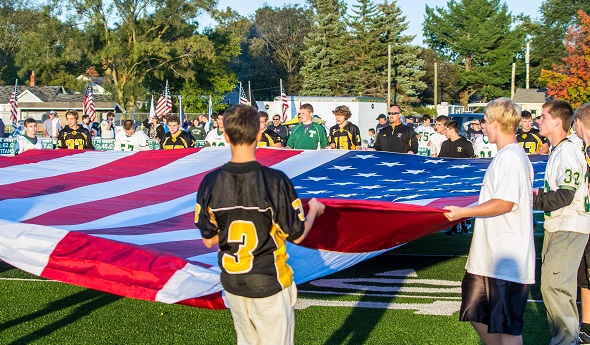 As has become tradition, the student sections will wear patriotic colors – tonight, West will be a sea of Blue and Central of red. The schools hold various fundraisers, including selling T-shirts leading up to the game. Money raised this year will be donated to Veteran 2 Veteran, a local program that sets up mentors for veterans as they return to civilian life.

Berry: “Last year I helped to build a memorial at our field, so that was really special and really awesome to present that to the veterans who were at the game. This year, something that I think is going to be really special is we’re doing a thing called ‘Bucks for Vets.’ We’re going to bring all the student senators and run through the stands for two minutes and get all the donations from as many people as we can to go toward this organization. The organizations that we support every year are chosen through a council. I’ve been on the council for three years now and meeting with all of the organizations. They’re able to pitch to us why they need the money, where they’re going to use the money so it will affect veterans in the area, and we’re able to choose what organization – they all deserve money – but what organization needs the money. So all of the money from the game is going toward them and not just extra new special things.”

Classes began Tuesday, giving student officers at both schools limited time to drum up enthusiasm for today’s events – although there’s already ample buzz. Both schools will hold assemblies today. At Central, veterans and first responders will be welcomed in to tell some of their stories. At West, student leaders will hold more of a pep rally to make sure the entire student body, especially new classmates, know details for the night and why they should be there.

Berry: “We have an assembly every year right before the game where we honor all of our veterans and all of our first responders, and I think that really explains to (students) why it’s such a big deal. During that assembly, everyone is completely silent. They have so much respect. Our whole school still talks about how astounding that assembly was to thank all of them (last year), and I really think they know how much it means. It’s really hard not to be emotional about it during the assembly because we have families that come in and they lost a loved one in a war, and we have people who came back from combat a few years ago, so it’s really easy to understand how much it means to everyone. Normally, all of our other assemblies, people are rowdy, (but) this one assembly everyone has so much respect. It’s amazing. You always hear, ‘Oh yeah, the veterans are losing their lives in the war. They’re fighting for our country. They’re risking their lives.’ But to actually hear from someone who has experienced the death firsthand, it really opens your eyes.” 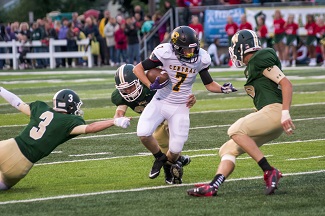 Both teams are 2-0, and this will be the first time they'll match up with perfect records. Both also are expected to contend in the Big North Conference; Central won the league title and West was third a year ago. But those teams make up only a part of what is, of course, an educational event.

Berry: “People definitely learn a lot about respect. You definitely notice how much respect everyone has during the game, toward other people; it’s amazing. Definitely in past years, I’ve learned how much veterans do for us. And not only veterans, but the responders, police, everyone. It’s astounding. I guess I just wasn’t aware previously how much they really risk and how much they really do. That’s the main thing I learned, and I think a lot of people in the school could say the same thing. And you really learn a lot about your community as well. (The game) is sold out every single year. The student sections are covered in a sea of blue and red, and you just learn how much support can be given to our community.”

Ticket sales at the stadium gate begins at 2 p.m. Veterans, reservists, active military and first responders will be admitted free of charge through special entrances, and later student senators from both schools will camp out at the entrances to make sure no special guests are waiting in line when festivities begin. A motorcade of American Legion Riders, local motorcycle police and North Flight emergency medical transport personnel will ride into the stadium, and colors will be presented by member of the U.S. Coast Guard Color Guard and first responder Honor Guard. 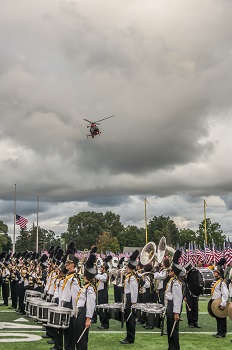 As the West marching band plays, student senators from both schools will form a tunnel for veterans and first responders to walk through as they enter the field and then line up at the 50-yard line, where they will be greeted by both football teams.

After the playing of taps and a memorial announcement of names, the junior varsity football teams from both schools together will take hold of a giant American flag stretching sideline to sideline as the band plays the national anthem. There will then be a flyover before the coin toss and opening kickoff.

Berry: “I think doing (the Patriot Game) with West makes it extremely special. Because not only do we have friends on the other side, but using the game in this way is extremely smart. We’re able to come together for a common cause, on common ground, in that we want to honor all these people and honor what they’ve done for us, and that really ties it all together. … I’ve been asked if I want more people to be in the student section from Central supporting the veterans or more people from West, but really, we want everyone there. We want everyone to do well. We want everyone to be able to thank everyone, and it’s just an extremely supportive thing. Of course we want to win, but win or lose, it’s a great experience.

An estimated 100-150 veterans and first responders attended the 2015 Patriot Game, and 150 or more are expected tonight with moderate temperatures and mostly clear skies expected. The schools are preparing for a crowd that could eclipse 8,000 fans total. 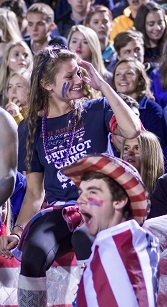 Priest: “I know people who don’t have kids in high school. My neighbors, actually, have elementary school kids, and they’re like, ‘We’re coming to the game. We bought T-shirts.’ Because they just want to help out with the cause. It’s broadcast on the news, it’s on the radio, it’s everywhere. It just shows so much how no matter if it’s your school or if it’s your kids, people just want to get involved and they want to know how they can help.”

Berry: “It explains so much about Traverse City’s personality and just how giving the entire community is, and accepting. Traverse City is such a special place in that everyone comes at you with open arms. Our community is so giving towards veterans. The hearts of everyone grow bigger during this game. Going there can definitely affect the way you view the city.

“There’s so much love in that stadium. And everyone wants to be there. It’s the event of Traverse City for the high schools. If you’re going to go to any of the games, I would tell you, you have to be at the Patriot Game.”

PHOTOS: (Top) Traverse City Central players shake hands with veterans before the first "Patriot Game" in 2012. (Top middle) Junior varsity players from Central and West hold the giant flag during last season's national anthem. (Middle) West players converge on a Central ball-carrier in front of a packed Thirly Field in 2015. (Below middle) A helicopter provides a fly-over as the Traverse City Central band takes the field. (Below) Students dress in blue and red in support of veterans and first responders saluted during the game. (Photos by Rick Sack/TC Rick Photo.)