A year ago, Hall’s junior season ended on the Ford Field sideline, watching Cass Tech fall 41-27 to Romeo in the Division 1 Final after he suffered a lower leg injury two weeks before. But he came back this season fueled by championship motivation, and made it pay off. Hall threw for 220 yards and an MHSAA Finals record-tying five touchdown passes to lead the Technicians to a 49-20 win over Detroit Catholic Central in the Division 1 Final on Saturday and earn the Michigan National Guard “Performance of the Week.”

Hall started a pair of playoff games as a freshman before taking over the varsity fulltime in 2014 and leading Cass Tech to a 12-1 record. The Technicians were a combined 36-3 under him the last three seasons and scored a program-record 619 points (44.2 per game) this fall. The 6-foot-2, 210-pound signal-caller completed 10 of 18 passes in the Final and also ran for 58 yards on only seven carries. He finished this season 142 of 238 passing for 2,535 yards and 28 touchdowns, after a junior season when he threw for 2,232 yards and 20 touchdowns and ran for 1,053 yards and 14 scores.

After admitting Saturday to being a little timid to run at the start of the fall, and with a steel plate still in his ankle, Hall ran for a combined 253 yards and three touchdowns over his final three playoff games. He has committed to sign to play football at Northern Illinois University but said he’s unsure which course of study he’ll pursue. MLive-Detroit reported Hall carries a 3.4 grade-point average in its feature on the Technicians standout as one of 10 finalists for MLive’s High School Football Player of the Year award.

Coach Thomas Wilcher said: Let's say it like this: He lost one game his first year, two games his second year, zero games his third year. That's enough said. ... I think the most important thing about Rodney Hall is you have to look at his stats. He has phenomenal stats. He has a phenomenal win-loss record. I haven't been around anything like that before. I just look at his game – (he's) the gamer. He's always bringing back a victory. We went down to the wire several times, and it was all about him. And I just told him this week, 'Look, I don't need you to run the ball. All I want you to do is throw the ball. You should throw the ball for over 300 yards.’ That’s it. And I told him, just stick with the game plan; no running. And I just kept telling the offensive coordinator, don't let him run. Let him throw it. That's it."

Performance Point: “Just to be able to make it back to this point and play in this game, I was just excited to come play, and glad we won,” Hall said. “The offense was clicking, and guys were open. They did the rest. I just put it to them. … (At last season’s Final) I was crying. I was hurt that I couldn't be out there to help my teammates. I wanted (this year) bad. We made history at Cass because I think we’re the first team to go 14-0 and win the state championship. We just wanted to win this game because we’ve been losing ever since we came into high school. We have a lot of wins, but we’ve been coming up short for the last three years – and it’s great to come out with the championship this year.”

Learning to run again: “I came in (to this season), I was a little timid to run, actually. I didn't want to get hurt again and miss this opportunity. Coach, he's been pressing me to run all year, and when I finally do, I get positive yards.” 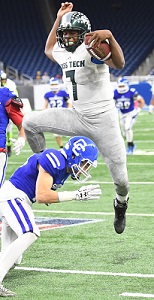 Star among the stars: “Quarterback is simple. You just have to keep everybody on the right track and make sure teammates don’t get down when we get behind. The last two weeks we’ve been losing, and I just remind my guys, ‘Come on, we can win this. We’re going to go back and score.’ Just remind them to keep scoring, remind the defense we’re going to keep getting stops, and just keep everybody’s heads up.”

Leaving a legacy: “I just can’t believe it’s over with. I just want people to know I was a guy to go out there and give it all I’ve got. Just sell out for the team, and that’s what you should do – and you’ll end up a champion.”