The Crusaders’ standout quarterback capped his high school career by leading his team to a 41-25 win over Muskegon to clinch the Division 3 championship Saturday at Ford Field. Finn completed 9-of-13 passes for 173 yards and four touchdowns and ran for another 73 yards and a score on 11 carries to earn the Michigan Army National Guard “Performance of the Week.”

This wasn’t Finn’s first time succeeding on the state’s biggest stage – the 6-foot-1, 195-pound signal-caller also quarterbacked King to the Division 2 championship in 2016, and the Crusaders fell just shy of making the Finals in 2017 as well, losing by a point in their Semifinal against Warren DeLaSalle. King was 35-6 over his three seasons as the varsity starter, and this fall he threw for 2,109 yards and 26 touchdowns and ran for 1,262 yards and 21 scores. He was further recognized Tuesday by being awarded this season’s statewide Mr. Football Award from State Champs Sports Network.

King finished 12-2 this fall, winning the Detroit Public School League Black division championship and defeating league champs River Rouge, Warren Woods Tower and DeWitt plus Allen Park on the way to Ford Field. The Crusaders’ losses came Week 2 – at Muskegon, 24-21 – and then in the PSL playoffs final to Detroit Cass Tech, 42-8. But Finn led the team’s rebound after each defeat and will get the chance to continue leading an offense at the college level. (He has been committed to sign with Central Michigan University, although the Chippewas recently fired coach John Bonamego and Finn didn’t have a comment on his future plans in the immediate aftermath of the championship win.) Finn also owns an MHSAA Finals championship in track & field – he helped King win the 800-meter relay in Lower Peninsula Division 2 this past spring – and excels academically, carrying a 3.1 grade-point average.

Coach Tyrone Spencer said: “He did a phenomenal job. That’s our 35th win together. I’m just proud of him, the way he did for us. He’s a great leader, a great competitor and a great football player. … Just his play-making ability, his decision-making. He was calm. He’s been here before, and he looked like it. He didn’t look rattled, or he wasn’t doing too much. He just played in the moment, and that’s why he plays so well.”

Performance Point: “It’s just a real moment right now,” Finn said during postgame interviews. “I’m just thankful for having it, for my team, and for just going hard these three years. It was a good experience. … I just tried to be the best me I could be – the best version of me.” 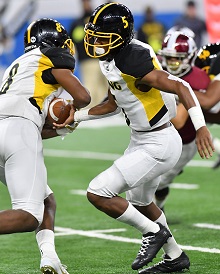 Second time’s the charm: “(Playing Muskegon twice) helped a lot, just (with) pre-snap reads – I knew where to go every single play. It was a big advantage for us to go against them Week 2. We still had that 24-21 loss in our minds. … It was an emotional game. We took it personally.”

Playoff rebound: “Coach Spencer said there’s a state championship out there (after the Cass Tech loss). If you want to get it, you’ve got to go get it. We just had to lock in mentally and prepare. That’s all we had to do, prepare and execute.”

From last season to this one: “(My) maturity, me knowing what to do and what not to do at certain points. Knowing down and distance; for instance, knowing what plays to run and what plays not to run. It’s just the little stuff.”

From Week 2 to today: “I learned I just had to calm down, not get too high, not get too low. Just remain calm at all times.”