Fugate, a 6-foot-1, 210-pound running back, ran 37 times for 477 yards and five touchdowns in GRCC’s 57-50 win over Comstock Park on Oct. 6. His rushing yardage ranked fourth-most in MHSAA history for one game and second-most in the state since 1990, earning Fugate the Michigan Army National Guard “Performance of the Week.”

Also the leading rusher on last season’s team that won the Division 4 championship, Fugate has carried the ball 111 times for 1,137 yards and 13 touchdowns this fall – averaging 10 yards per carry. He's amassed those numbers despite limited attempts in four running clock games this fall. After coming up for the playoffs but seeing little action as a sophomore, and then moving into a prominent role the last two seasons, Fugate is fourth in GRCC history with 335 career carries, second with 2,537 career yards, tied for second with 27 career rushing touchdowns and fifth with a career average of 7.6 yards per carry. And like any good back, he knows to credit those clearing the way – Fugate follows an outstanding line led by 6-5, 270-pound Jalen Mayfield, who has committed to sign with University of Michigan.

Fugate also ran track last season for the first time in high school and plans to do so again this spring. He hopes to return to the basketball program as well – he played subvarsity his first two years before taking last season off. He’s aiming to continue his football career after high school and has interest from many of the state’s top Division II programs plus a few at the Division I mid-major and NAIA levels. Fugate is planning to study business and carries a 3.2 grade-point average. Wherever he goes, that program will get a proven winner – GRCC is 7-0 this fall heading into tonight’s Ottawa-Kent Conference Blue title-deciding matchup with reigning Division 5 champion Grand Rapids West Catholic, and the Cougars are 21-2 with Fugate on the roster.

Coach Todd Kolster said: "I think the world of Nolan. He is a very self-motivated young man. He is very mentally tough and has worked extremely hard to help lead our team. He is a great teammate and a high-character person. He's is a great competitor. ... He is one of the best tailbacks in the state of Michigan; he rushed for over 1,600 yards and 21 touchdowns a year ago. He could have very gaudy statistics and surpassed those totals already if I played him in those other (running clock) weeks."

Performance Point: “We had a good gameplan coming in, and I think we executed really well and our line blocked really well and it was just a good night offensively,” Fugate said of the Comstock Park win. “I knew I was having a pretty good night. I knew I had some big runs, and I was just following my blocks, but I didn’t know the exact yards I had. I was actually pretty surprised (at the yardage total). I had some big runs the first possession, and I could see our offensive line executing their blocks well so I was figuring I would have a pretty big night. The first play we had the ball in the second half, I broke a 72-yard run. That was my favorite run because I broke out into the open and I just ran past everyone and I could hear the crowd screaming.”

Following Jalen: “He’s my best friend too, and it’s pretty special. You don’t get a chance to run behind the best lineman in the state very often, so I’m pretty fortunate. We shared a moment when we talked about how good of a night it was, and it was just a really special night overall.” 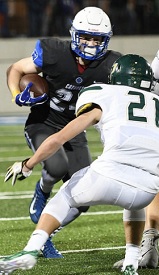 Great expectations: “We’ve just been listening to the coaching staff, and whatever they’ve asked we’ve been executing to the best of our ability. And we’ve been staying focused throughout the week trying to have the best practices we could have. We realize the expectations are high, so we just have to stay focused on each game and play united and just get better each day. You’ve just got to worry about one thing at a time and for that (opponent), and you can’t look ahead to the playoffs. … We knew the expectations were high, but I had faith. We definitely had more talent last year, but I feel like we’ve executed a lot better this year up to this point. I knew we could be special, and if we just keep working out each day and bringing it every day I think it will turn out really well.”

Running like “All Day” Adrian: “My favorite running back is probably (the Phoenix Cardinals’) Adrian Peterson, so growing up I always watched him. He’s a strong, explosive, physical runner. I like how he runs downhill and he’s always physical, and when he gets an opening he’s very explosive.”

Hooping like a football player: “A kid I grew up with (point guard Austin Braun) has been talking to me about (playing basketball). I was thinking about it, and I think I’m just going to do it. I think our team will do really well this year, so it would be fun to be a part of it. I’ll probably play really physical. I’ll probably be like the sixth man, bring intensity and defense and rebounding. That’ll probably be my job."