The Panthers’ multi-talented quarterback has become the state’s most-discussed emerging star from last weekend’s MHSAA 11-Player Football Finals after leading River Rouge to an arguably unexpected 30-7 win over Muskegon in the Division 3 championship game. Hrabowski ran 15 times for 175 yards and three touchdowns and completed 6-of-12 passes for 45 yards more in leading the Panthers to their first Finals title in the sport, earning the MHSAA “Performance of the Week.”

For the season, Hrabowski ran 115 times for 1,175 yards (10.2 per carry) and 14 touchdowns and completed 78 of 108 passes for 1,045 yards and 11 scores with only two interceptions. In making its second trip to the Finals, River Rouge set a program wins record finishing 13-1 with its only loss in Week 1, by three, to eventual Division 4 champion Grand Rapids Catholic Central. The Panthers also outscored their five playoff opponents by an average score of 37-7. But the crowning achievement certainly was defeating Muskegon – the Big Reds were last season’s Division 3 runners-up and the top-ranked team entering this fall’s playoffs, and had received national recognition this fall while quarterbacked by Ohio State recruit Cameron Martinez. After the Big Reds took a 7-0 lead with a score during the final minute of the first quarter Saturday, Hrabowski scored on runs of 1, 40 and 35 yards to put the Panthers up 21-7 less than a minute into the third quarter.

The 6-foot-3, 205-pound signal caller had showed his skills well all fall, but the attention likely will grow substantially after his Ford Field performance. He announced earlier this week he’d received a scholarship offer from Bowling Green, and he’ll surely be one of the most anticipated players to watch heading into next fall. Hrabowski also will play basketball for River Rouge, last season’s Division 2 runner-up in that sport, and run track next spring. He carries a 3.5 grade-point average with algebra and environmental science his favorite classes, and he enjoys building and fixing things – mechanical engineering is a field of study he’s considering after high school.

Coach Corey Parker said: “Mareyohn is a great kid, he plays the game hard, he plays the game smart, he plays the game the right way, he’s always focused and is very coachable. He’s a great leader and works hard to get the most out of his teammates. He’s hard on his offensive line on the field, yet maintains a great relationship with all of them off the field – that speaks to his character. … We were not shocked by his state championship performance at all; we knew he had a chance of having a big game if he could get through the emotional roller coaster the state championship throws at you. Mareyohn was your prototype dual threat QB at Ford Field Saturday. He ran the ball exceptionally well and completed several passes for first downs during crucial points in the game. I’m very proud of him and our QB coach, Larry Johnson. (Mareyohn) developed as the season went on and peaked at the right time.”

Performance Point: “After the game, just enjoying the moment after beating the No. 1 team in the state, and letting it soak in – the crowd, everybody was really happy. We won our first state championship in school history, so it was really big for the city, and it means a lot for everyone. It was a really big night for us, the whole team and the city.” 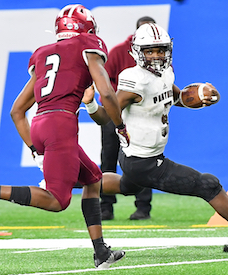 Taking the spotlight: “Before the game a lot of people were talking about Muskegon. A lot of people thought they were going to win. When we won the game, people started talking about River Rouge, and it put us on the map. We were looking forward to playing a game like that. We knew that the championship, that it was going to be a good team. We like playing against competition. Those big games get us hype.”

Finals formula: “To make it this far, it definitely takes teamwork, and trust, and believing in your coaches. And never giving up. It’s not easy making it to the state championship. It takes a lot of hard work. You’ve got to be consistent. Team bonding in camps, and getting to know each other and hanging out together really builds a lot of trust and believing in each other.”

Big plays, big-time player: “I was really looking forward to the opportunity. I like playing against competition. I worked as hard as I could to get to this point, and I knew I wasn’t going to give up. … I think every time I ran the ball, passed the ball, I did it like it was going to be my last. Every touchdown that I ran, I ran as hard as I could. And playing against Muskegon, it built my confidence every single time we got a big play – and that played a big role in how I played the game that night.”

More to come: “I watch (Baltimore Ravens’ QB) Lamar Jackson a lot. I like some of my game being like his a little bit. (I’m planning on) getting a little bit faster in the offseason and getting more tools for my box for next season. ... I want to show that I can pass the ball, not only run the ball, and hopefully next year will be fortunate enough to make the state championship again and win. And just keep on showing people I’m one of the best quarterbacks in Michigan.”

PHOTOS: (Top) River Rouge's Mareyohn Hrabowski (5) breaks away for one of his three touchdown runs Saturday while his teammates cheer him on. (Middle) Hrabowski works to evade a defender.