The Eagles had held opponents to 6.8 points and 27 yards rushing per game, and 1.1 yards per carry. Just three opponents had scored in double digits, and Frankenmuth had won each of those games comfortably.

Grand Rapids Catholic Central was well aware of those numbers – so much so that coach Todd Kolster recited them off the top of his head after the game. But the Cougars were also aware of the playmakers they had on offense, and the opportunities they would have to make plays.

Behind a six-touchdown performance from junior quarterback Joey Silveri, Catholic Central did just that, claiming a 48-21 victory against the Eagles at Ford Field. It’s the second-straight title for the Cougars, and fourth in five years. The previous three came in Division 4.

“They are a great defense; they don’t give up a lot of rush yards,” Silveri said. “We knew going into this game that we were going to have to win our matchups one on one to make some big plays, and I was very confident in our guys.”

It was the second-straight year that Silveri accounted for six touchdowns in the Finals, as he did the same against Detroit Country Day in 2019. On Saturday, he threw for three touchdowns and ran for three more. He finished the night with 172 yards on 9 of 15 passing, and 104 yards on the ground.

“I love playing in big games,” Silveri said. “It’s what you play for; it’s a lot of fun. All the preparation we did through this week, it all paid off. When you play a defense that’s basically man-on-man coverage, they bring a lot of pressure, it leaves a lot of chances for big plays, and we took advantage of that tonight.”

Silveri and the Cougars (11-0) wasted little time spreading the field and putting their athletes in space to keep Frankenmuth’s aggressive defense off balance. He hit senior running back Nick Hollern for a 30-yard pass on the first play from scrimmage, and each of the first two drives ended with touchdown passes to the Cougars’ Division I-bound receivers – an 11-yard pass to junior tight end Nolan Ziegler (Notre Dame) and a 13-yard pass to senior receiver Jace Williams (Miami of Ohio). 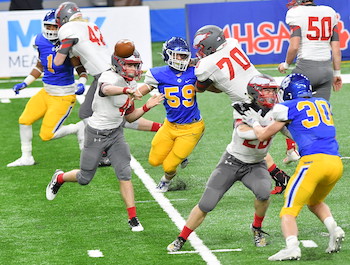 “I thought our guys really came out aggressive, and that was the big thing for us,” Kolster said. “We knew they were a heck of a football team, they’re very physical, they play hard, so we had to be able to match that intensity and get some matchups early. We were able to do that, and we were able to continue to go.”

The hill was too high to climb for Frankenmuth (11-1), which was making its first Finals appearance. The Eagles have been a near-constant playoff presence, making it in each of the past 10 years and qualifying for seven Semifinals since 1987. This year’s group was able to take a big step, even if it wasn’t the final one.

“Today, leaving town was amazing,” Frankenmuth coach Phil Martin said. “Our community rallied around this team. It was a sendoff like no other. I want to say it was probably close to 14 miles long with people lined up showing support for this team. The community was outstanding. They stepped up and supported us for this state championship with contributions for buses and meals. It’s just been awesome.”

While Frankenmuth finally broke through this season, Grand Rapids Catholic Central has entered elite territory, with five titles since 2010 and its recent dominant stretch. With key players like Silveri and Ziegler coming back, it might not be over – although Silveri wasn’t quite ready to think beyond Saturday’s accomplishment.

“I’m just trying to enjoy tonight – enjoy the win,” he said. “We’ll worry about next season when we get there, and hopefully we’ll win another one.”

Ziegler had a pair of touchdown catches on the night, adding a 35-yarder early in the second quarter. Silveri’s rushing touchdowns came on runs of two, one and 12 yards. Hollern, who had 192 yards rushing, added a one-yard touchdown. Ziegler and Dan Mikolay each had seven tackles to lead the Catholic Central defense.

Daniel Barger, Davin Reif and Konnor Roche had touchdown runs of four, seven and four yards, respectively, for the Eagles. Cole Lindow led the team with 99 yards rushing, while Reif had 85. Ben Reinert led the Frankenmuth defense with 12 tackles, while Dalton DeBeau had eight.

Barger’s touchdown was set up by an Ashton Benkert fumble recovery, with the ball sprung loose by Ethan Jacobs. That made the score 14-7 late in the first quarter, but Catholic Central scored the game’s next 21 points to pull away.

“I can’t ask any more of our kids; they came out and fought hard,” Martin said. “We got a little behind early. Field position kind of put us in a bind, and we didn’t convert a couple first downs early, and they were able to take advantage of that field position. We made a couple pretty good adjustments at half, but it just wasn’t enough.”