PORT HURON – The first touchdown of the football season has already been scored at Port Huron High School’s Memorial Stadium.

In fact, nearly 60 were scored two weeks before the Big Reds are set to take the field in Week 1 against Flint Carman-Ainsworth, and it will be tough to find any that mean more this season.

Port Huron hosted its fourth annual “Victory Day” this past Friday, giving special needs students in the community a chance to experience a Friday night atmosphere in the stadium.

“You have kids from all around that have special needs and they give them one day, and to see them smile and see their faces, to me it’s priceless,” said Aaron Sigafoose, whose 6-year-old son Wesley participated. “To me, it’s priceless as a parent. It’s really cool.”

Wesley was one of a record 67 participants who pre-registered for the event. Individuals ages 5 to 26 are eligible to sign up, but Port Huron football coach Ryan Mullins said his program wouldn’t turn anyone away.

Each participant is matched with a varsity football player or cheerleader as a mentor, runs through the band onto the field after being announced as part of the starting lineup, and participates in one offensive play which ends in a touchdown.

As Wesley and his fellow participants made their way to the goal line, the junior varsity football team provided a skeleton offense around each ball carrier, and the freshman team served as the defense. An announcer boomed and the crowd roared during each run, and when a touchdown was scored, everyone celebrated like it was a game-winner. 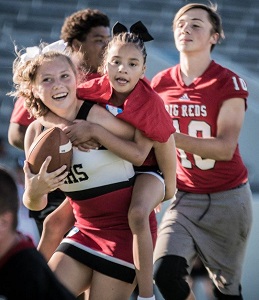 “It was awesome,” said Port Huron sophomore Jace Mullins, Ryan Mullins' oldest son, after helping his buddy Ranger score a touchdown. “Just working with them for the hour we had with them, it was just awesome. It was a blessing. It was fun.

“I think it means a lot. … Just for him to know what it’s like to score, to reach the end zone especially in this stadium, it’s awesome.”

Victory Day was started at Trenton in 2010 by coach Aaron Segedi, a former teammate of Ryan Mullins at Saginaw Valley State University. Segedi was diagnosed with cancer in 2005, and as he battled the disease, his sister Rhonda donated 70 percent of her liver to him. Inspired by his sister’s selflessness, Segedi vowed to make his community a better place and started Victory Day. The event has spread, not only to Port Huron and other parts of Michigan, but into Ohio, Kentucky, Indiana, Maryland, Minnesota and New Jersey, according to the Victory Day website. This year’s Victory Day in Trenton will be Sept. 15.

Port Huron High School counselor Tracey Hopp – Ranger’s mother – brought the idea to Mullins, who didn’t hesitate to start one at their school. That first year, Segedi came to Port Huron to help the Big Reds get the event off the ground.

“Aaron actually goes across the United States and does it,” Mullins said. “He does it at the university level, he does it at the high school level, and along the way he’s been able to get sponsorships to help with uniforms and the medal, so there’s really no cost to participate.”

While the event is meant to bring joy to special needs students in the community, Mullins said his players look forward to it just as much.

“The guys who have done it already, they’re looking to see the player they were paired up with last year,” Mullins said. “We give them a little background information about the player, and they want to know that stuff. We really try to make that connection. They’re taking them through the locker room, playing catch with them, there’s agility bags. There’s a lot of things going on just to try to make a connection and make a friend with them.” 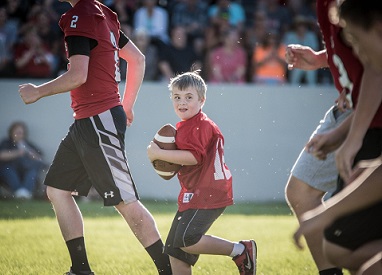 Seeing the joy on the faces of the participants also helps the players appreciate the opportunity they have to play each week.

“Some of us play for kids like that,” Port Huron sophomore Noah Kindle said. “Just seeing them after the game, giving them a hug, things like that.”

Kindle said he’s looked forward to this part of being a varsity football player at Port Huron, and he’s excited to get to work with Wesley Sigafoose at Victory Day for the next two years. Wesley showed his appreciation immediately after scoring, turning and giving Kindle a hug after he crossed the goal line.

While the players certainly get a lot out of the event, they also know that this one time, the Memorial Stadium bleachers aren’t filled to see them, and they’re perfectly fine with that.

PHOTOS: (Top) A Port Huron “Victory Day” participant runs toward the end zone while Port Huron players give chase Friday. (Middle) A Big Reds cheerleader carries her partner and the ball toward the goal line as defenders pursue. (Below) A participant looks back to see Port Huron teammates charging down the field with him. (Photos by Jeremiah May.)