PORTAGE — When Kurt Twichell was hired as Portage Northern’s head football coach last May, he had some serious closet cleaning to do.

As an assistant coach at crosstown rival Portage Central, his wardrobe was filled with blue and gold.

“I had to clean out probably 80 percent of my closet,” Twichell said, laughing. “Being a phys. ed. guy, I had quite a bit of blue and gold PC stuff.

“That all went into a big old bag, and I actually donated it back to them. I had a lot of work to do from a wardrobe perspective, no doubt about that.”

Twichell is nearing the conclusion of his first season as a head coach, with Portage Northern 2-6 this fall heading into its season finale Friday against Kalamazoo Central.

He had spent the previous seven seasons at Portage Central, finishing his tenure with the Mustangs last fall as their defensive coordinator. Across town at that time, Pete Schermerhorn was completing his 27th and final season leading the Huskies’ football program – and after some thought, Twichell applied to be his replacement and was named Northern’s next coach this spring.

Twichell made sure to wear orange when he met with his new team for the first time.

If he had worn any hint of blue, “We wouldn’t have let him in,” said senior and two-way player Xavier Thomas with a big grin.

Twichell said he understood why players were apprehensive.

“I think naturally, with teenagers, it was like what the heck is going on?” he said. “We hired a guy from Portage Central. This is crazy.”

Twichell said he worked very hard to establish a rapport with the players.

“You’re trying to build trust within your program,” he said. “As soon as I accepted this job, I’m diving full on in, orange, brown and white as a Huskie.”

Thomas said players did not know what to expect.

“The initial feeling, we were a little nervous as far as what his path for us was going to be. Having come from that school, would he hold a grudge against us or not?” he recalled.

“After meeting him and sitting down and having a conversation with him, we understood that he was fully on the path of Portage Northern Huskies. He fully supports all of our sports programs, not just football. He’s just a great guy that we need in our community.”

Twichell said his love of football started at Haslett High School in “an up-and-coming program” under head coach Charlie Otlewski and defensive coordinator Rob Porritt, adding “Those are my guys.”

After a football injury at Hope College derailed his playing career, Twichell transferred to Michigan State as a “regular student” and started working with Otlewski and Haslett’s football team.

“I spent a couple years there doing it for fun,” Twichell said. “I ended up loving it so much.”

He scrapped plans for med school and earned a teaching degree.

Taking his first job at White Pigeon, “I was just a young guy looking for any job I could get.” 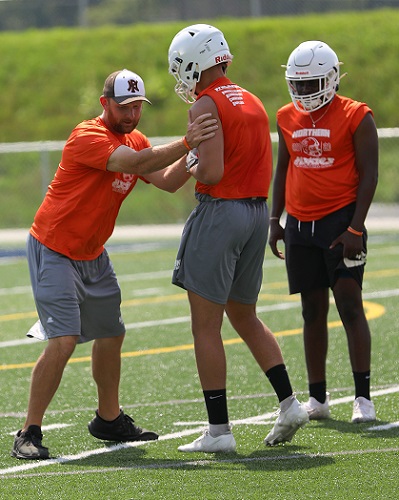 Two years later he contacted Enders, who happened to have a job available. Twichell spent the next seven years at Central, working his way up to defensive coordinator.

When he heard about the opening at Northern, which included a teaching position, he was not sure about applying.

“I was very, very rooted with Central and really enjoyed the staff and the opportunity they gave me to work my way up to d-coordinator,” he said. “When this job came up, I actually sat down and thought about it for more than three seconds. Being a head coach is a goal of mine.”

Twichell’s wife, Kate, coaches the Portage schools’ co-op girls lacrosse team and he said the family, including 3-year-old twins, are happy living in the community.

That makes for some interesting family dynamics, especially during the rivalry game.

“I try to push the (twins) one way; Kate doesn’t necessarily try to push them either way but we still hear the ‘M’ (Mustangs) word after “Go” from the kids,” Kurt said.  “They’ll say every now and then, Go Mustangs or Go Huskies. Kate just cheers for ‘no injuries,’ the way she puts it.”

No longer just Xs and Os

“The biggest change is how much of your role has almost nothing to do with football from an Xs and Os perspective or from an actual coaching kids perspective,” Twichell said.

“People just see Friday nights and results, but below the surface is all these components that go into building a good program,” he said. “Coach Shermerhorn left a pretty good foundation in terms of that iceberg, but I definitely want to put my own spin on things.”

During the day, Twichell is in the weight room, teaching a full day of power lifting.

The academic classes are open to all students, and Twichell hopes to resurrect the school’s power lifting team.

Chris Riker, Northern’s athletic director, said when hiring a coach, it is not where he coached but if he was a good fit for the program.

“We had some outstanding candidates and Kurt had a good plan on developing culture, developing not just the football player but the whole athlete, the whole person,” Riker said. “Academics were important. Getting involved in your community is important, and being a role model for the younger kids is important as well as being a good football player, good person.”

Riker said the team is very involved with the community.

“He’s done some things with our kids and Rocket Football to establish that connection with the youth program,” he said.

He added that Twichell and Enders collaborated on Camp Ability in July.

“It’s a camp for special needs kids who want to be involved with football,” Riker said. “It’s pretty cool to get out there and see kids who aren’t involved in football be that excited and be next to our football players. Kids had big smiles on their faces, just to be able to try on the shoulder pads and football jerseys.”

The children also ran drills, tossed footballs and ran for touchdowns, helped by players from both teams.

Not just another game

The Huskies are still settling into a new system (although a highlight was a Week 4 win over Division 3 No. 10 Stevensville Lakeshore). But Twichell has surrounded himself with solid support, carrying over several assistants from Schermerhorn’s staff. 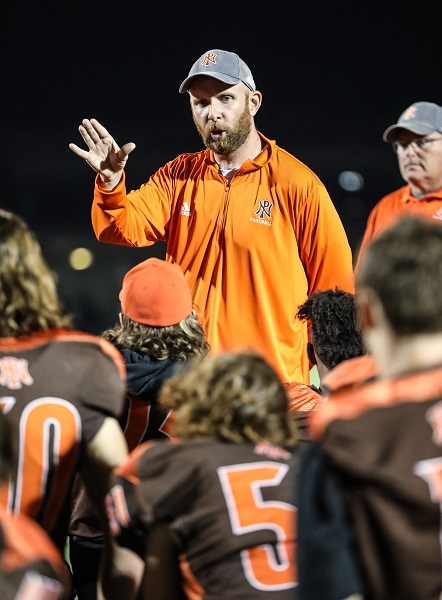 “Those guys have been phenomenal,” Twichell said. “Just about every coach who wanted to come back did.”

“People probably wondered what that was going to look like, but I have nothing but admiration and respect for Tom,” Twichell said. “We also brought back Mike McGuire who was on staff here probably 10 years ago. He’s a quarterbacks, offensive guy and a former head coach himself. That’s been huge to have these guys.”

“When you go through losing groups like that, there’s going to be a transition there, regardless of a new coach,” he said. “We have a very young team, an inexperienced team.”

One game on Twichell’s radar this fall was the battle of the Portages, a game Northern lost, 33-17, two weeks ago.

“I’m not sure there’s a playbook out there that anybody’s ever written,” he said. “Not just competing against players that you had physically coached and had invested so much in their lives, but you know their families, their career aspirations, especially that senior class.”

Twichell said the “coach speak” was that it was just another game.

But the emotions surfaced during the postgame handshakes.

“Lots of hugs and some emotions. It was a good feeling from a human standpoint, but obviously we’re disappointed the game didn’t go the way we wanted it to,” he said.

Thomas said his coach warned the players that the game would generate more than the usual hype.

“He let us know there would be a lot of attention brought on us from the media, being (Central head coach Mick) Enders vs. Twichell,” Thomas said.

“But with his preparation, we were pretty dialed into the game. Hopefully we can take the things we learned from that game and assess them moving forward so the things that happened in that game won’t happen again.”