He's never had to experience a loss since being promoted to Clarkston's varsity football team before last year's MHSAA playoffs, so that's never been an issue.

But comparisons between the Eriksen brothers are plentiful — and valid.

Nolan, a junior running back, ran 28 times for 172 yards and three touchdowns as the Wolves repeated as MHSAA Division 1 champions with a 33-25 victory over first-time finalist Saline on Saturday at Ford Field.

A year ago, Ian Eriksen ran 32 times for 237 yards and three touchdowns against Detroit Catholic Central, leading Clarkston to its first title.

So, you'd think that Nolan would've leaned upon his brother's advice now that he was the starting running back in the championship game.

"I was just trying to do what I do," Nolan said. "People always try to compare us and stuff, but I just try to play my game and do the best I can for my team. No advice. ... Every now and then we'll talk about it a little bit, but mainly we try to keep it pretty separate. We just do our own thing."

Senior quarterback D.J. Zezula has no problem comparing the brothers. He's got a unique perspective, having handed the ball to each during his three-year career as Clarkston's starter.

"Noah doesn't want to be compared, but they're twins in my eyes," said Zezula, who ran 17 times for 120 yards and a 70-yard touchdown. "They're both hard-hitting football players. Mr. (Mark) Eriksen coached me when I was younger; he's the same way. They're awesome kids. They want what's best for the team. I love both of them. I love Mr. Eriksen. They're great guys. He coached me my first two years of football that I ever played." 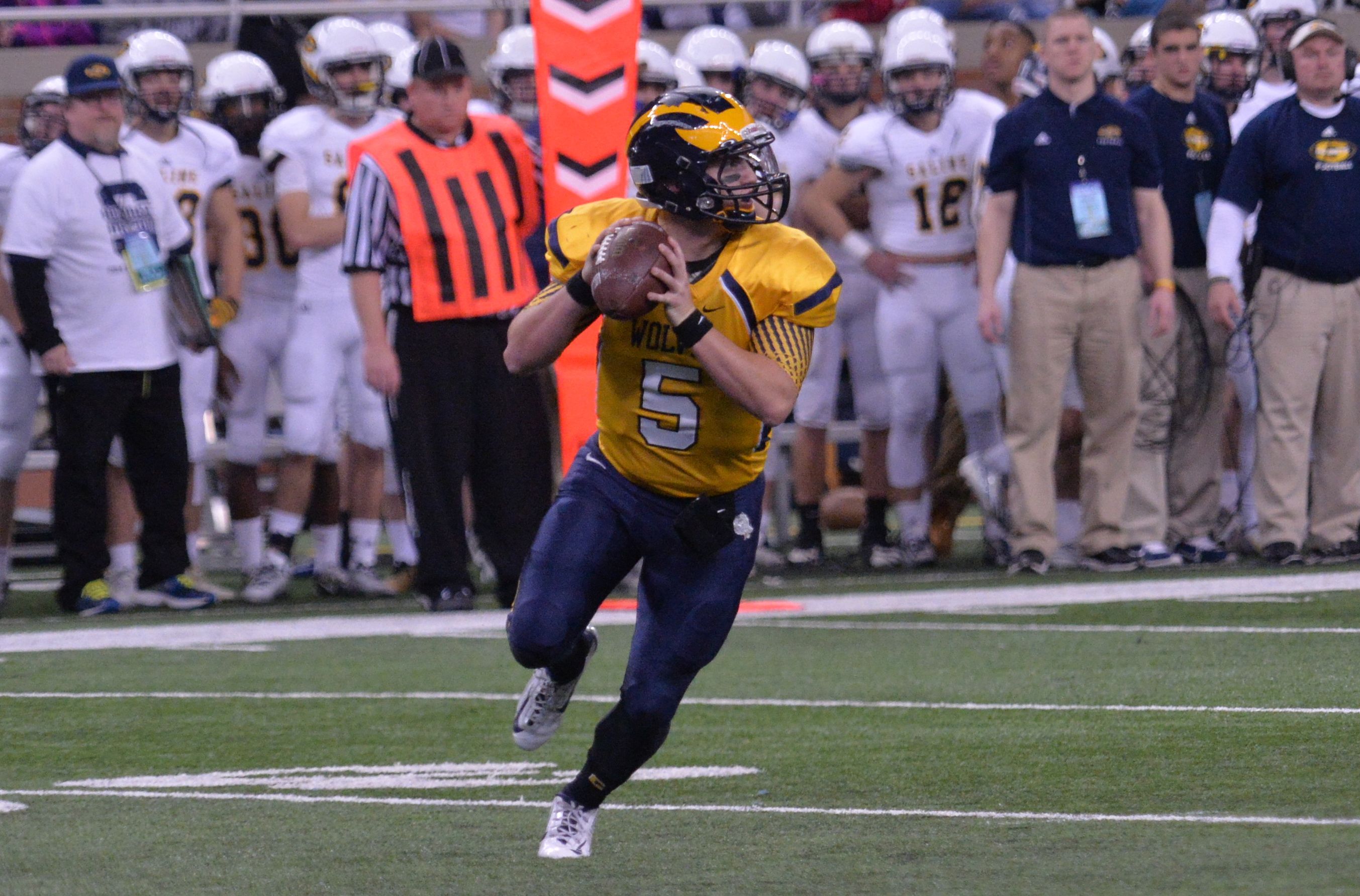 While Ian Eriksen was the workhorse for Clarkston's first championship team, Nolan watched from the sidelines, as is typical for junior varsity players who are promoted after the regular season. He said he "got a couple plays" during the 2013 playoff run, but never saw action at Ford Field.

Just being part of the atmosphere last year was beneficial once he stepped onto the field Saturday, Eriksen said.

"We've been here before," he said. "We weren't too shocked looking around. We knew what the deal was. We knew what it felt like to be here. We knew what was riding on it. It was just the experience. It was incredible being able to look up there and see your whole town there and getting it done."

"These guys have taught me something," Clarkston coach Kurt Richardson said. "The old Kurt Richardson would've blown up at half with two turnovers and stuff. We just said, 'Hey, we're fine. We're down three. We didn't play very well. We're getting the ball, so everything's fine.' I learned it from these guys."

The Wolves needed only four plays after the second-half kickoff to take the lead for good on a 52-yard pass from Zezula to Merrick Canada with 10:09 left in the third quarter. A bobbled snap prevented an extra-point kick, leaving Clarkston up by a 13-10 score.

Clarkston's only three-and-out of the second half came on the next series, but the Wolves followed with three straight touchdown drives. A 2-yard run by Eriksen made it 20-10 with 47 seconds left in the third quarter before Zezula kept it and ran 70 yards for a touchdown with 8:17 remaining in the game, expanding the lead to 27-10.

Just before that touchdown, Saline missed a chance to make it a one-possession game. The Hornets had first-and-goal at the 8-yard line, but settled for a 24-yard field goal attempt that was wide left.

Saline also missed a field goal on the first series of the game, as linebacker Cole Chewins blocked the kick. Chewins, who has committed to Miami (Ohio) as a tight end, also batted down three passes.

"With the deflections and stuff, that was just playing the game," Chewins said. "I was able to make plays and just play football."

Saline coach Joe Palka tried to run plays away from Chewins, who had his blocked kick and two of his knockdowns early in the game.

"We had to adjust and go to the other side, just because he can cover so much ground and he's got such good range," Palka said.

Saline cut the deficit to 27-17 when quarterback Josh Jackson scored on a 1-yard run with 5:15 remaining.

Clarkston (14-0) recovered the onside kick, then marched 50 yards in eight plays, the final 22 yards coming on a touchdown run by Eriksen with 1:57 on the clock. The extra point failed, keeping it a two-possession game at 33-17.

That loomed as a potential issue when it took Saline only four plays to reach the end zone on a 2-yard run by Kevin Gross with 1:09 to go. Cameron Cole caught a 2-point pass from Jackson to make it an eight-point game.

Jackson, a junior, was 20-for-31 for 237 yards while running 17 times for 82 yards and a touchdown to lead Saline, which won a school-record 12 games (to finish 12-2) and advanced beyond the Regional Final for the first time.

"It's an amazing thing for Saline football," Jackson said. "It's the best team ever in Saline. That we got to play on this stage was an amazing opportunity. Going into next year, that will just give us fire to come back here and try to win it."

Even though his career ended Saturday after starting at quarterback for teams that went 37-2 over three seasons, Zezula is mindful of what these back-to-back championships will mean for the future of the Clarkston program. The Wolves lost in Semifinals three times in 16 playoff appearances under Richardson before breaking through last year.

"Last year was kind of like breaking the mold, breaking this dark cloud over Clarkston that we could never win, could never get there," Zezula said. "This year was about building a legacy, a tradition here at Clarkston. ...

"It hits home when the little kids, the seventh-graders at our youth camps, wear my jersey and wear No. 5. That's where it really hits home, just to pave the way for the younger kids and start a legacy, start a tradition here that winning is what's got to happen at Clarkston."

PHOTOS: (Top) Clarkston's Nolan Eriksen takes a handoff as his lineman work to open a gap near the goalline Saturday. (Middle) Quarterback D.J. Zezula looks for a receiver while those on the Saline sideline look on. (Click for action photos and team photos from Hockey Weekly Action Photos.)

GROSS GETS SALINE STARTED - Saline started the scoring in the second quarter against Clarkston with Kevin Gross running it in from 27 yards out.

OH CANADA! CLARKSTON GOES ON TOP - Clarkston took the lead to stay in the Division 1 championship game when D.J. Zezula hit a wide open Merrick Canada on a 52-yard pass.

Watch the entire game and order DVDs by Clicking Here.