And yes, becoming only the third program to win five straight MHSAA football championships has been an honor, but also a heavy expectation to uphold.

But this fall it rested on an experienced Falcons group that shined again Saturday at Ford Field, riding the experience of what’s become an annual trip to Detroit.

“I think one of the hardest things is coming in and working hard every day throughout the whole offseason, throughout the season itself,” said West Catholic senior Gaetano Vallone, who quarterbacked these last three champions. “Not a lot of programs can do that.

“With our guys, everyone’s there in the morning from freshman to varsity level, so that really helps us. We have a lot of dedication.”

And the Falcons have had Vallone – a major difference maker again Saturday.

Over three MHSAA Finals, Vallone averaged 197 yards and two touchdowns passing and 86 yards and a score running the ball as the Falcons previously beat River Rouge 40-34 in 2015 and Menominee 43-7 a year ago with him running the show.

West Catholic coach Joe Hyland called Vallone the best competitor he’s coached. And Swan Valley coach Kevin Gavenda noted how Vallone has played more high school games in three years – including more than a season’s worth in the playoffs – than most to acquire such valuable experience. That’s paid off in playmaking ability but also in perspective, which pays off in potentially stressful situations like the Semifinal where the Falcons trailed Frankenmuth 21-0 before coming back to win 25-21.

“My sophomore year I was just kinda going with the flow, trying to do my best, trying to put the team in a position with my abilities,” Vallone said. “Now as a senior, I’ve gotten a lot better, more knowledgeable of the game. Sometimes I call (Coach) off, because I see something, and he allows me to do that because he trusts me.”

Vallone was not alone, of course, among Falcons who were contributing to a second or third championship Saturday. And that experience seemed to come through in West Catholic’s workmanlike approach.

The Falcons scored on their first three possessions and six of their first seven, putting up all 34 points by the 5-minute mark of the third quarter. Swan Valley’s lone score came on the last play of that period.

West Catholic outgained Swan Valley only 296-265. But the Falcons had only one penalty and intercepted three passes, plus took back the ball on three turnovers on downs (not counting a fourth on the final play of the game). 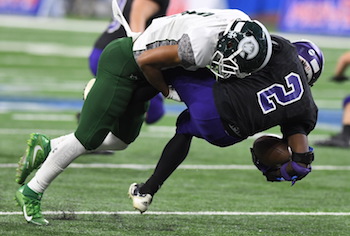 “Experience, as I’ve said quite a bit, has been a huge advantage for us throughout the course of my time here,” said Hyland, who finished his second season as coach and third at the school after previously coaching in South Carolina. “Especially when it comes to playoff time. These guys have been in very difficult situations and fought their way out. They have not in any way panicked despite some unfortunate plays on our part and really good plays by the teams we have competed against.”

Before the Frankenmuth scare, West Catholic also edged Portland 28-26 on the road to earn a Regional title. Frankenmuth, Swan Valley and Portland had the three highest playoff-point averages in Division 5 during the regular season.

The Vikings (12-2) were making their first appearance in an MHSAA football championship game, and Saturday’s loss was their first since Week 1.

“It was a big step for the program, even getting here, going from last year with the disappointing loss to our rivals (Freeland) in the playoffs first round,” Swan Valley senior running back Emmett Boehler said. “To come to Ford Field the next year is a big step.

Leinberger ran 10 times for 67 yards and the touchdown, and Boehler added 61 yards on the ground to finish with more than 1,600 this season.

Leinberger also had a team-high 12 tackles.

He and Fries, the quarterback, were among a talented group of juniors who could have the Vikings back in the hunt next season as West Catholic also goes for a record-breaking sixth straight title.

“When you have five extra games, that’s big for all of the kids that we brought up,” Gavenda said. “We’re starting six juniors on offense, six juniors on defense, and a lot of these guys are going to be three-year starters next year.

“I don’t think this program is going anywhere any time soon, but you’re never guaranteed anything. We know the grind it took to get here this year, but we’re excited, absolutely.”