But it was impossible to argue the duo’s effectiveness as they worked together to keep the Falcons ahead of a River Rouge comeback attempt led by another quarterback putting up near-record numbers.

Fox, the starter when the season began, and Vallone – who took over when Fox was lost with a shoulder injury in Week 3 – combined for 288 yards rushing and 106 passing as West Catholic held on for a third straight Finals win, 40-34, despite the heroics of Panthers senior signal-caller Antoine Burgess.

“We’re both athletic, we’re both physical and I guess Coach (Dan) Rohn says we’re playmakers, so we’re playmakers,” Vallone said. “It definitely helped because we’re both gamers, and that’s what it takes. With two of us back there … it really can spread things out and get them confused.”

The Finals appearance was West Catholic's fifth straight, but Vallone was among players who had significant impacts for the first time this fall.

Fox ran for 152 yards and three touchdowns from his “scat” quarterback position, while Vallone ran for 115 yards and threw for 84 and a score despite being limited by an ankle injury sustained during last weekend’s Semifinal win over Lansing Catholic.

But that would’ve counted River Rouge out far too early.

Burgess brought the Panthers back within seven with a 63-yard touchdown pass to senior Aaron Vinson with 3:56 left in the third quarter, then responded to Vallone’s 9-yard scoring pass with a 1-yard touchdown run 1:06 into the fourth.

The teams traded scores four more times, the last a 2-yard run by Burgess with four seconds to play. An onside kick was covered by the Falcons, denying Burgess one last chance at another deep toss to tie the score.

“I just told (my teammates) not to give up yet and play hard. It wasn’t over,” Burgess said. “Like I saw yesterday, King came back and won the (Division 2) game. I told them we could do that too. I continue to fight no matter what.”

A few more key plays figured into the final score, notably a tackle for a safety by West Catholic senior Conner Nemmers with 7:15 to play, followed by a 31-yard field goal by sophomore Liam Putz that made the Falcons’ lead 12 with 4:13 left in regulation. And while it didn’t lead to a score directly, Fox’s 22-yard pass to senior Billy Kral on a fake punt helped the Falcons drain a few more seconds off the clock – and ended up setting up the safety when Fox drilled a 53-yard punt to the River Rouge 3-yard line five plays later.

For the game, Burgess threw for 354 yards and three touchdowns and ran for 70 yards and two scores – missing the MHSAA Finals record for total yardage by only two and approaching the record of 383 passing yards set by Detroit Martin Luther King’s Armani Posey in the Division 2 Final on Friday. 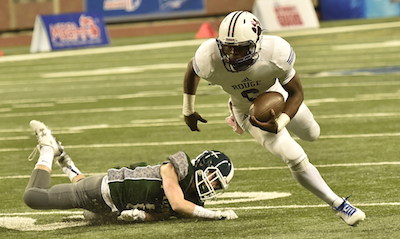 But Burgess and his teammates made it a memorable night for a community that had six straight sub-.500 seasons before coach Corey Parker took over in 2009. The Panthers set a record for wins this fall in making the Finals for the first time and finishing 12-2.

“I think we’ve arrived, to a certain extent, in reference to the way my kids handled things,” said Parker, who has led his teams to a combined 40-7 record over the last four seasons. “To watch them manage this process, it tells me a lot about my guys and what we’ve developed as far as a foundation.

“Most press writers thought they were going to bail us out 50-something to zip. But my guys looked at that opportunity and said hey, let’s see how good they really are.”

Burgess completed 13 of 19 passes, with Vinson grabbing four for 162 yards, sophomore Giovanni Turner catching four for 95 and a score and senior Ashawnti Howard pulling in three for 84 yards and a touchdown. Junior Aaron Hall caught West Catholic’s lone touchdown pass, and junior Sam Neville had the team’s final points on a 3-yard run with 1:27 to play.

West Catholic defeated three top-10 teams and a fourth that earned an honorable mention in the final statewide media poll to get back to Detroit, before downing River Rouge, another honorable mention. Not bad for a team that started 1-2, lost a starting quarterback and had another on a sore ankle the last two weeks.

“We had a small senior class, and I think a lot of people doubted this group since they came in as one of our smallest classes in history. But for them to be here four years is pretty remarkable,” Rohn said. “All along we knew we had a tough early schedule. … We just said, let’s just stick to our guns. We’ve been 1-3 and 1-4 in recent years and we’ve still been able to make it back down here. So the kids buy into the scheme, continue to work hard and believe in the coaches. Because a lot of people would quit at 1-2. Not this group, not this community.”