MARQUETTE – Central Lake may not have been totally sure what it got itself into switching to 8-player football heading into this fall.

Clearly it didn’t take the Trojans long to figure things out.

A year after finishing 2-7 with 11 players on the field, Central Lake finished Saturday afternoon at the Superior Dome with its first football championship, downing Deckerville 32-30 in the inaugural 8-Player Division 1 Final.

The championship was the first for the school in any MHSAA tournament sport since claiming the Class D softball title in 1980. The Trojans also finished 13-0 this fall.

“Last year it was not even something. Or just growing up, you’re watching the Finals on TV … ‘I’m never going to be there,’ but it’s cool to watch,” Central Lake senior quarterback Gavin Mortensen said. “You dream about it. And then all of a sudden, you’re a state champion. It’s crazy.”

And so was the finish, as Mortensen put his team ahead to stay on a six-yard touchdown run with 2:49 to play. Central Lake came back from 10 points down with under a minute to play in the third quarter, riding a powerful running game to the final two of four rushing touchdowns on the day, while also halting two Deckerville fourth-quarter drives that reached the Trojans’ 21-yard line.

“Those get your heart pumping, don’t they, those stops? But what a great way to win,” Central Lake coach Rob Heeke said.

Junior running back Grant Papineau went over 2,000 yards rushing for the season, adding 183 for a final total of 2,067 while also rushing for his 26th touchdown of the fall. Junior Skyler Spangler had 101 yards and two scores on the ground to finish the season with 1,753 yards and 28 touchdowns rushing. 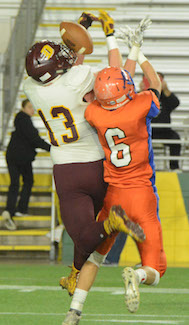 Mortensen, in addition to running the show, made it count when his number was called, adding a 49-yard touchdown pass to senior Jayce Hoogerhyde. And Hoogerhyde, who had 15 pass break-ups as a defensive back entering the game, made an equally significant play on that side of the ball batting down Deckerville’s final pass into the end zone.

Those are the guys who got most of the attention during the perfect run. But a most unlikely contributor deserved his share as well Saturday. Junior center Dalin Clark (6-foot, 265 pounds) left the game with an injury near the end of the first half. In came sophomore Vance Hoeksema (5-6, 140), who had played that position only a couple of times this fall. But the Central Lake attack just kept rolling.

“We just kinda rallied around Vance, and he did a great job,” Mortensen said. “After we got the first few bad snaps out of the way, exchange-wise, he did really well.

Guys on the line picked him up and told him what to do if he didn’t know, and it worked out.”

Hoogerhyde said it wasn’t until a 14-point Week 8 win over Onekama – that clinched for the Trojans the Midwest Central Michigan Conference championship – that he and his teammates started to realize what they might be capable of accomplishing this fall.

Deckerville had been to this level before, winning the 8-player championship in 2012 and finishing runner-up to two-time champion Powers North Central a year ago. That the Eagles (11-2) returned to the final game Saturday was impressive though, considering they replaced nearly their entire backfield from a year ago and then didn’t have injured leading rusher Cruz Ibarra for the last two games.

“We’d love to win that state championship, but I think we overachieved maybe a little bit,” Deckerville coach Bill Brown said. “They really came together as a team midway through the season and as a head football coach, when you watch your kids and they come together and they’re playing as a team, and you’re getting those selfless acts … we have kids giving just everything they have out there. When you’re a coach, that’s all you ask for.

“I’m disappointed in the outcome of course. That doesn’t define this football team. We could play that game again, and we might win by two touchdowns.”