DETROIT – An arduous playoff road over the last five weeks pushed Reading up against some of the most established football programs in Michigan high school history.

Pre-District opponent Mendon is tied for 10th with 12 MHSAA Finals football titles. Semifinal foe Fowler has won seven championships. Those two, Cassopolis and Adrian Lenawee Christian all were state-ranked during the regular season. Friday’s championship game opponent Beal City was not, but is tied for the most playoff appearances in MHSAA history with 35 over the 45-year history of the tournament.

Reading made its 25th playoff appearance this fall, an impressive feat on its own. But by winning a second straight Division 8 championship – after last year’s first in school history – the Rangers launched their program into that group of the most revered.

They concluded this chapter with a 33-6 win over the Aggies on Friday at Ford Field, extending an incredible run while allowing a star-studded senior class to leave its personal imprint on what Reading has accomplished.

Reading finished this fall 13-1, winning 13 straight after a 14-0 opening loss to Pewamo-Westphalia, which will play Saturday for a third Division 7 title in four years. The Rangers are 27-1 over the last two seasons.

Not that the senior class needed motivation after making a major contribution to last season’s title run. But coach Rick Bailey emphasized that those seniors shouldn’t feel like reigning champions, and instead pursue making their own impact – and the P-W loss threw kindling on that message.

“We worked hard over the summer, but that first loss … kinda lit a fire in us and told us what it took to make it back here, so we really wanted it,” Reading senior lineman Nick Affholter said.

“Also, I thought it was great, because it was our team this year,” said senior linebacker/tight end – and Nick’s twin – Ben Affholter. “We got to be seniors and we got to be leaders, and that drove us to win it as our team.”

Friday’s matchup with the Aggies (12-2) was set up to be strength on strength – especially considering the two starting quarterbacks together combined for only about 1,500 yards passing this fall.

The game stayed within a score until midway through the third quarter, when Reading began to show it was stronger in the long run.

The Rangers scored the final 19 points, all on runs, and outgained Beal City on the ground 260-42. Reading also had 10.5 tackles for loss, with Ben Affholter leading with 4.5. 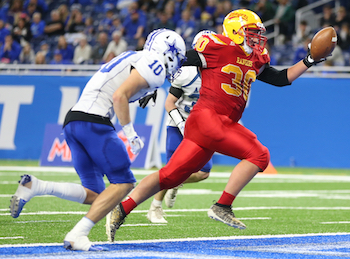 Beal City senior quarterback Jack Schafer was able to counter with 115 yards and a touchdown passing, completing five of nine attempts. But Rangers junior Porter Mauk also made the most of his six attempts, connecting on scoring passes for his team’s first two touchdowns.

“I think their up front gave us fits,” Beal City coach Brad Gross said. “Number 44 in the middle (Ben Affholter) obviously was stunting, and we didn’t do a very good job of picking him up. But I’m sure that kid is an all-state football player. … They’re big, bigger than we are, and also a lot faster than you think they are.”

Reading finished the season having given up 103 points, or 7.4 per game. Lenawee Christian (21) was the only team to score more than 18. Ben Affholter finished with 10 tackles total Friday, and brother Nick had eight. The Rangers recovered two fumbles and snagged an interception.

The Aggies made their eighth appearance in an MHSAA Final, and first since 2013. They had finished below .500 the last two seasons, including 2-7 a year ago, before mounting arguably the strongest comeback in the state this fall.

“I think they fit right in there with the best (in school history),” said Gross, who quarterbacked the 1994 team to the Class D title. “I can’t ask for anything more from these guys, starting from last year at the end of the year. It didn’t start in June; it started last year, in November. These kids made a commitment to be there and get things done, and that’s what they did.”