Don’t tell that to John Passinault. This one was special – way different than what he may have envisioned at the start of the season.

The senior quarterback connected with Notre Dame commit Nolan Ziegler on a pair of second-half touchdown passes, and the GRCC defense did the rest in a 31-7 victory over Marine City in the Division 5 Final on Saturday at Ford Field.

Joey Silveri, GRCC’s three-year starting QB, suffered a season-ending knee injury in Week 4. That’s when Passinault, a 6-foot, 180-pound converted receiver, switched to the signal-caller position. Passinault picked up where Silveri left off and helped lead the Cougars to a second-straight Division 5 title, their sixth championship in the last dozen years and seventh overall.

“Well, it’s surreal. Before the season, if you would have told me this was going to happen, I would have told you you’re crazy,” said Passinault, who finished the game 15-of-28 passing for 221 yards with one interception.

“A bad thing happened to a really good kid, Joey Silveri, and that’s just the mindset of the team to step in where it’s needed. I went from wide receiver to quarterback and it’s pretty easy to do that when I have guys around me like Nolan, Ronin Russell-Dixon, Devin Fridley-Bell, Luke Kuzner, Jack Rellinger. I have all those guys around me, it’s easy to step into that role and just settle in.”

GRCC (14-0) completed its third perfect season in the last five years, but Marine City (13-1) made the Cougars work for it for the better part of three quarters Saturday.

GRCC led 10-0 in the second quarter after a 29-yard field goal by junior John Meyer and a 2-yard TD run by Rellinger, a senior. Marine City hung in there, however, and pulled within 10-7 on junior QB Jeff Heaslip’s 3-yard scoring pass to senior Charles Tigert with a little more than three minutes left in the half.

The score remained that way until the closing seconds of the third quarter. Ziegler, a 6-4, 210-pound receiver and linebacker, caught a pass over the middle from Passinault, turned the corner and raced down the sideline for a 59-yard scoring play.

That seemed to ignite the Cougars’ offense a bit. 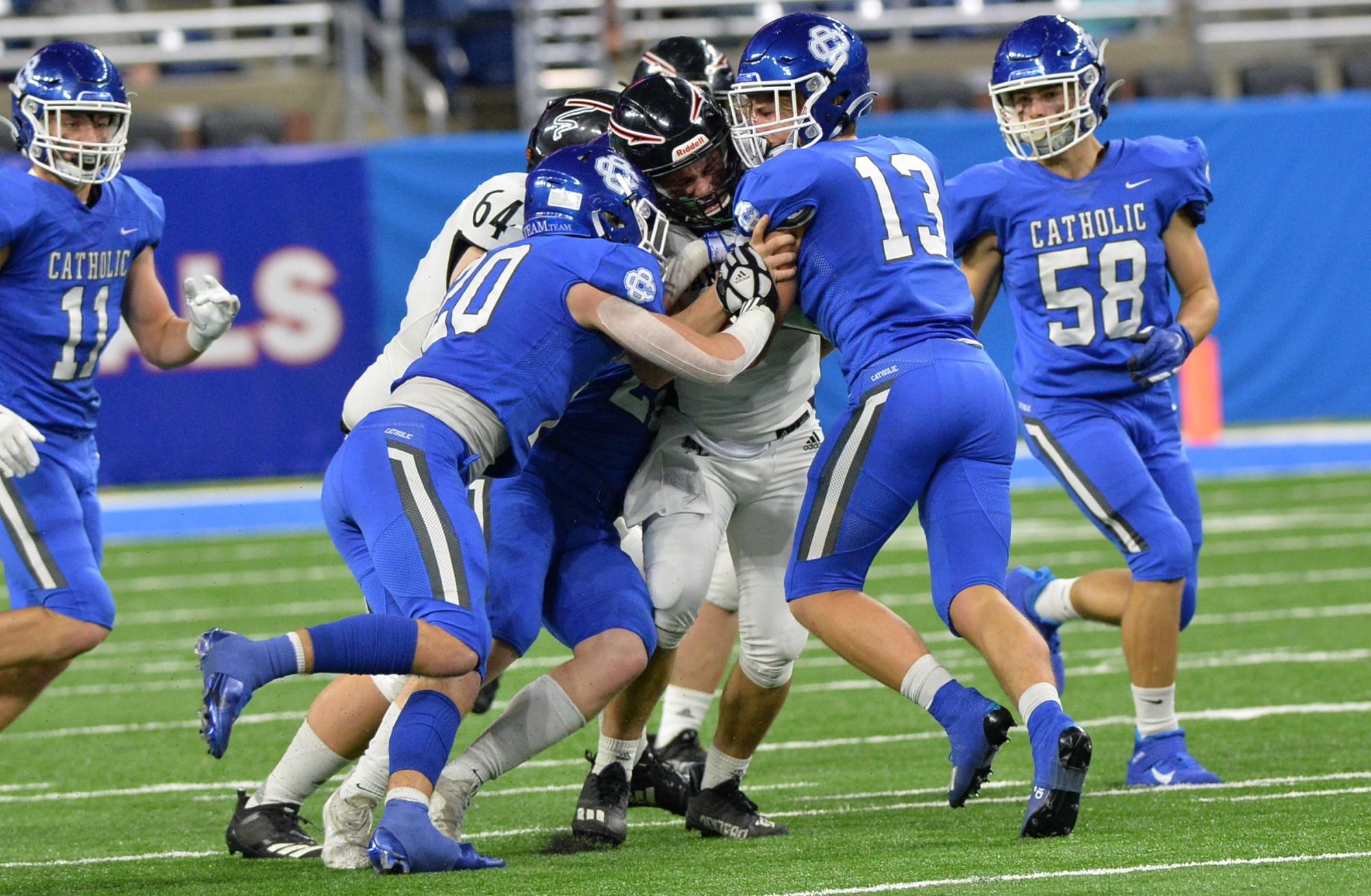 “My team, they blocked well, it was a great pass by John,” Ziegler said. “We were just kind of playing backyard football out there honestly, and we just got things going. I got a good block from the receivers, and I just got down and got it in.”

The Passinault-to-Ziegler connection struck again four minutes later, this time on a 17-yard TD play, as the Cougars began to pull away. Ziegler finished with seven receptions for 136 yards, plus he notched a game-high 13 tackles in displaying his Power Five college football credentials.

Senior linebacker Jack Klafeta put the exclamation point on the victory for GRCC with a 34-yard scoop-and-score midway through the fourth quarter. Klafeta notched nine tackles, as did junior Jack Cook.

“Just their athleticism all over the field, their physicality up front, made things very difficult,” said Marine City coach Daryn Letson, whose team allowed no more than 14 points in a single game this season prior to Saturday.

GRCC finished with a narrow edge in total offense, 228-215. The Mariners outrushed the Cougars, 77-7.

Kolster said the Cougars made great strides from the start of this season.

“It’s a pretty surreal thing for these guys up here – just unbelievably proud of them for so much that they’ve accomplished this year,” he said. “This team probably has come as far as any football team in a season that I’ve coached.

“Just coming together, learning what it takes, getting experience, understanding each other, fighting, competing. That’s a process and we were far, far away with them at the beginning of the season. To come here and be able to get this done, the credit goes 100 percent to our seniors.”

It was an emotional farewell for Passinault. He carried on the strong QB play provided by Silveri, who is a college prospect and led the Cougars to Finals titles in 2019 and 2020.

As a passer, Passinault proved more than capable in his own right. He threw for 2,307 yards and 37 TDs this season.

“This is it. That will probably be the last time I ever play football, so it’s just crazy to think that that’s the last time I’ll play specifically with these people,” Passinault said. “ … It’s just crazy. As a kid, you just dream about this. And to have it happen, it’s just a surreal feeling – and having dreams come true, it’s crazy.”