DETROIT – Edwardsburg finished the deal on Friday, erasing much of the disappointment the final game of last season produced.

Although the Eddies’ offense was slow to jell, they controlled the clock and Chelsea’s multi-faceted attack to capture their first MHSAA Finals championship in any boys sport with a 28-7 victory in the Division 4 title game at Ford Field.

Edwardsburg has one other MHSAA title to its credit – the girls volleyball team won Class C in 1977.

“This is a huge moment for the program,” Edwardsburg coach Kevin Bartz said. “Last year was more of a surprise. Beating a good River Rouge team, we were just happy to be here. They were more focused this year and not getting involved with all of the hoopla.”

Edwardsburg defeated River Rouge, 32-21, in a Semifinal last season and then lost to Grand Rapids Catholic Central, 42-31, in the Final. Last week, the Eddies avenged that defeat, downing GRCC 46-44 in overtime in their Semifinal matchup.

The Eddies (14-0) entered this championship game averaging 48.5 points per contest this fall and had scored 196 during the playoffs. But Chelsea (10-4) was up to the task early, and its defense gave the team a chance at winning would have been its first football championship as well.

But an underrated unit is Edwardsburg’s defense. The Eddies have five shutouts to their credit this season, and their defense kept this game close until the offense got untracked.

“You hear a lot about our offense,” Bartz said, “but it was our defense that won the game.”

Mistakes, a missed field goal attempt and a failed fourth down try kept the scoring to a minimum in the first half.

Chelsea stopped an Edwardsburg try for a first down on 4th-and-1 at the Eddies’ 34, but the Bulldogs couldn’t take advantage of the fine field position as Bryce Blue intercepted a Chelsea pass in the end zone.

That turnover set up Edwardsburg’s lone touchdown of the first half, as Caden Goggins scored from five yards out. Isaiah Mitchell’s conversion run gave the Eddies an 8-0 lead with 1:53 left in the first quarter.

Chelsea came back on the next possession and scored on a four-yard touchdown pass from Quinn Starkey to Hunter Neff, who made a one-handed catch in the left corner to complete the play. Starkey was 3-of-3 passing for 50 yards on the 64-yard drive. 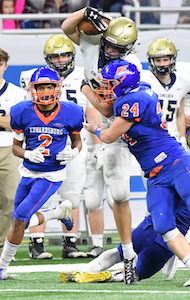 The teams exchanged turnovers in the middle of the second quarter, and Chelsea couldn’t capitalize on a good scoring opportunity late. The Bulldogs drove from their 40 to the Edwardsburg 3, but a three-yard loss and an incomplete pass produced a bit of a dilemma for Chelsea coach Josh Lucas. He decided to go for the short field goal from the 6, but it missed to the right with 20 seconds left. Edwardsburg clung to an 8-7 lead at the break.

There were just two possessions in the third quarter, and only Edwardsburg made good on its opportunity.

The Eddies took the second half kickoff and drove 83 yards in 12 plays. Mac Gaideski, on his only carry of the drive, scored on a five-yard run. Quarterback Tre Harvey’s conversion run gave Edwardsburg a 16-7 lead with 6:39 left.

Chelsea used up the rest of the quarter, but its drive stalled at the Edwardsburg 32, and third and fourth down passes were incomplete.

Edwardsburg’s first drive of the fourth quarter didn’t produce any points, but it was just what Bartz wanted. His team burned 6:31 off the clock and pinned the Bulldogs on their 15.

Chelsea did not make a first down on its next drive, and the Eddies put the game away as Harvey ran five yards around right end for a touchdown and a 22-7 lead with 3:10 left.

“I came back with a vengeance this year,” Harvey said. “I wanted it. (Chelsea) came out strong in the beginning. They’re a good team. We preach playing strong in the third and fourth quarters. We definitely wear teams down.”

Edwardsburg rushed for 382 yards on 50 carries. The Eddies did not complete a pass in two attempts, but that’s not unusual for a T-formation team that prefers physicality at the line of scrimmage over big pass plays.

“The running backs deserve the credit,” Harvey said. “They’re the ones carrying out the fakes.

“We came in here not so much in awe as last year. I might have stared at the ceiling here too much a year ago.”

Goggins led Edwardsburg with 125 yards on 15 carries, and Chase Segar had 119 yards on 14 attempts.

For Chelsea, Starkey was 16-of-27 passing for 178 yards and one touchdown. The Bulldogs were held to 69 rushing yards.

“All of the credit goes to the line,” Sager said. “They made the holes. We had a mindset after last year. We weren’t used to the atmosphere then. I think now people will know where Edwardsburg is (located). We’re making them pay attention.”

Edwardsburg is located in the southwest part of the state, by the way.