DETROIT — With a championship on the line and the margin for error too thin, Paul Hurley couldn't have been faulted if he started looking elsewhere to throw the football.

Heimbuch was sure-handed when it mattered the most, catching three passes for 46 yards on the game-clinching drive, as Romeo beat Detroit Cass Tech, 41-27, in the MHSAA Division 1 championship game Saturday at Ford Field. Heimbuch even grabbed the 2-point pass following Brad Tanner's 16-yard touchdown run with 1:29 remaining in the game.

"Everyone still believed in me. Everyone was still coming up to me telling me to just get over it, forget about it," Heimbuch said. "I just knew I had to make a play if it came back to me. I forget my drops. You can't think too much on them or else they'll kill you."

Romeo scored six touchdowns, blocked a punt and recovered an onside kick to start the second half, but one of the key plays in the Bulldogs' first championship victory was a 12-yard catch by Heimbuch on second-and-13 on the second play of the final drive. That set up a manageable third-and-one and got the drive rolling. He also had catches of 12 and 22 yards on an 11-play, 75-yard march that consumed 5:45 from the clock, leaving Cass Tech little time to produce a miracle comeback similar to Detroit Martin Luther King's in the Division 2 Final on Friday.

Just when it looked like Romeo (13-1) would simply run out the clock, Tanner broke free from 16 yards out for his third touchdown of the game. He finished with a game-high 130 yards on 13 carries.

The drive began after a 36-yard touchdown pass from Aaron Jackson to Donovan People-Jones got Cass Tech within 33-27 with 7:15 remaining.

"I knew I just had to run hard on the play and good things would happen," Tanner said. "On that last drive, the whole time I knew if we just killed the clock, we'd be victorious."

Even before his three key catches on the final drive, Heimbuch made a major contribution to the victory on defense.

He blitzed Jackson and got a sack to force a fumble, which was recovered by Romeo's Austen Malczewski at the Cass Tech 40 with 10:36 left in the second quarter. Four plays later, Tanner's second touchdown run from 31 yards out gave the Bulldogs a 19-7 lead.

"We changed the call at the last second to a two-linebacker blitz," Heimbuch said. "It just opened up. The D-linemen took away their guard and center. I shot the gap. He just lost the ball; he panicked, I think."

Romeo scored on its first three possessions before Heimbuch's first drop on third-and-seven ended the fourth drive. The Bulldogs took that 19-7 lead into halftime.

Taking a page out of Sean Payton's book from the New Orleans Saints' Super Bowl victory in the 2009 season, Romeo's coaches called for an onside kick to start the second half. Kicker Zach Nies recovered his own kick at the Cass Tech 48-yard line. Six plays later, Domenico Bongiorno bulled his way 10 yards up the middle for a touchdown, extending Romeo's lead to 26-14 with 9:49 left in the third quarter.

"They have unbelievable return guys, so we were not supposed to kick it to them at all," Romeo co-coach Curt Rienas said. "We actually thought there was a 70-percent chance we would recover it. When you look at only a 15-yard difference in field position, we thought that was a good gamble on our part."

Recovering onside kicks was a priority in practice all week for Cass Tech (11-3) after it failed to cover three in its Semifinal victory over Canton. 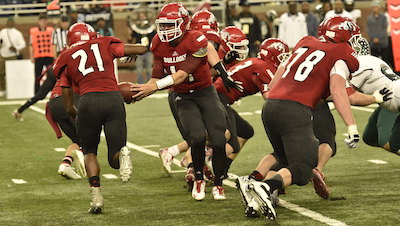 "That really ticked me off the most, out of anything that happened today," Cass Tech coach Thomas Wilcher said. "As far as trick plays or big plays, that one hurt the most, because we taught the kids what to do. We talked about it, met about it; they just froze. We lost three onside kicks, so that was the most important thing going into the game, just making sure we got all the short kicks."

Special teams had another huge impact when John Verellen blocked a punt and Anthony Quas returned the loose ball 18 yards to the Cass Tech 20. Hurley scrambled for a 20-yard touchdown on the next play, putting Romeo ahead 33-14 with 7:00 left in the third quarter.

One day after Detroit Public School League rival King rallied from 18 points down to win the Division 2 title, Cass Tech provided the host city some hope for another miracle comeback.

Jackson threw a 17-yard touchdown pass to Demetric Vance with 2:14 left in the third quarter, following a Khalid Jordan interception, and a 36-yarder to People-Jones with 7:15 remaining to make it a six-point game.

It was only the second start for Jackson, a sophomore who took over in the Semifinal game when junior starter Rodney Hall was injured. Jackson finished 19 for 27 for 194 yards and two touchdowns Saturday.

"These two starts have really been a big confidence booster for me," Jackson said. "I have a great offense, a great defense. I really love my teammates. These great athletes right here did this; I played a really small role."

Jackson wouldn't get the ball back until Romeo had run the clock down to 1:29 and added eight more points to the deficit.

People-Jones caught eight passes for 85 yards and a touchdown, with his first seven catches going for nine yards or fewer.

"They tackled great," the highly-recruited junior receiver said. "They rallied to the football, which made it harder to escape and make big plays."

To win its first championship, Romeo had to knock off three teams that combined for five of the last six Division 1 titles.

The Bulldogs opened the playoffs by ending Clarkston's two-year reign, 28-14. In the Regional Final, they beat a Detroit Catholic Central team that won the 2009 championship and was runner-up three years in a row from 2011-13. Romeo completed the journey against a Cass Tech squad that won the 2011 and 2012 championships.

It was only the second MHSAA championship for the school, the other won a year ago by the volleyball team.

"The Romeo community was a sea of red," Romeo co-coach Jason Couch said. "I would like to see if anybody else brought as many as Romeo did. If they did, I applaud them. The community shut down. They were here. Businesses were closing. That just shows the support.

"The reason they come out and support the boys is because they're busy in the offseason and in season supporting them with community service and doing other events and activities throughout the community. That's why we graduated from Romeo and we're back in Romeo; it sucks you in. We're proud to be Bulldogs."