Which makes sense – the oldest probably had just turned 3 when Andy Schmitt was locking down his local legend status as St. Johns’ history-making quarterback.

What they probably don’t remember, they’ve surely heard about – how he led unheralded St. Johns to the 2004 Division 3 championship game, its only appearance in an MHSAA Football Final, on the way to starring at Eastern Michigan University and earning a tryout from the Detroit Lions.

That fame he earned more than a decade ago still stands tall, just as the Redwings' first-year varsity head coach did by a few inches over the rest of his coaching staff and possibly all of his players as the team kicked off the 2019 season with a midnight practice on its home field.

While Schmitt’s experiences and successes surely could have led him down a variety of football coaching roads, he always was circling to come back home – with the hope of giving today's players opportunities to make memories like those that continue to resonate within him.

“It never mattered on opportunities. It was always a matter of trying to come back home,” said Schmitt late Sunday night, as St. Johns’ game clock behind him ticked down the seconds until football teams statewide were allowed to practice for the first time this fall. “My wife’s from here. I’m from here. I grew up with a lot of pride in this community. I saw myself, once I decided to get into education and coaching, I saw myself coming back to St. Johns.

"We had such a good experience playing here, made a couple of nice runs, and I just want to help this program do the same thing."

He began a busy journey as a mostly-unheralded high school junior in 2003. Unheralded, that is, until he led St. Johns to its first District football title that fall.

Schmitt then emerged the next season as the best from a historically-deep group of standout mid-Michigan quarterbacks, leading St. Johns to the Pontiac Silverdome. Although the Redwings lost that championship game to Lowell 38-17, Schmitt made a pair of long scrambling passes that helped St. Johns stay tied with the Red Arrows until the final minutes of the third quarter. And regardless of the defeat, the playoff run spoke volumes – Schmitt eventually was named Lansing State Journal All-Decade quarterback for the mid-Michigan area in 2010, prestige that lives on even for players who have seen him play only on YouTube.

“It’s all over the school. He’s got a banner in there, a picture in the weight room,” Redwings senior lineman Sam Hallead said. “It’s always there to motivate us.”

Schmitt went on to Eastern Michigan University, where after redshirting his first year he played 34 games with 30 starts before a knee injury ended his college career after the team’s third game of the 2009 season. All told, he threw for 5,867 yards and 33 touchdowns at EMU and holds four school passing records while ranking near the top in a number of other categories. He still shares the NCAA Division I record for single-game completions with 58 against Central Michigan in their 2008 meeting.

Schmitt came back from his injury to try out for the Lions in 2010, and then he turned toward his next career. He student taught at Williamston, then as a long-term substitute at Bay City John Glenn before taking his first fulltime teaching job at New Buffalo. Then it was on to Fowlerville and Ovid-Elsie Middle School before arriving back at St. Johns in 2015. Schmitt coached at all of the schools where he taught, and was a freshman coach the last three seasons under his former coach Dave Mariage, who retired from the head varsity job after last season. A week after Mariage resigned, Schmitt was promoted, and he’ll be surrounded this fall by all of the same staff – and with Mariage as his freshman coach.

It's where Schmitt always was meant to be, with qualities he began showing 20 years ago shining through.

“The same love of the game. The same enthusiasm. He loves the game, he knows the game, and he’s excited every day he comes out here,” Mariage said. “I didn’t know that’s what he was going to do (become a teacher and coach), but he’s a natural leader. He checks all the boxes. He’s going to do great.” 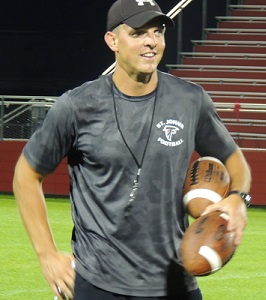 Schmitt takes over a program that remains one of the most consistently successful in the Lansing area.

Mariage stepped away with a 124-72 record over his 19 seasons, and the Redwings haven’t finished below .500 for a season since 2005. They’ve won two more District titles since Schmitt graduated and are a regular league title contender.

St. Johns will begin its seventh season since building a football stadium after Schmitt starred on a field that certainly could be referred to as yesteryear. And Hallead said the varsity has 35 players out, with his class plenty familiar with the new coach after Schmitt coached them as freshmen.

Schmitt laughed when asked if his players know of his legendary status in town – “They don’t need to know” – but he admits there’s substantial buzz heading into this season. He’ll never forget how the community came out to support the team when he played, and that support was perhaps the heaviest  driving force that brought he and his wife Teisha (Thelen), also a 2005 grad and three-sport standout, home again and home to stay.

“The amount of pride that I experienced going through the runs that we had junior and senior year, and again, watching this town come together and how supportive the town was, made football mean so much to me,” Schmitt said. “How a group of people can bring a lot of people together, seeing the support, seeing the pride made me want to come right back to St. Johns.

“This is home. There’s not going to be anywhere else. This is where we’re going to raise our kids. There’s no going anywhere from here.”