SCHOOLCRAFT — Soccer phenom Hannah Thompson has a flare for finding the net.

This fall, the Schoolcraft High School senior is aiming even higher – in the most literal sense.

Thompson is the place kicker on the Eagles’ football team, and in the team’s three games so far, she has connected on 4 of 5 point-after attempts.

The first female varsity football player in school history, Thompson is no stranger to breaking records.

Her 87 goals in soccer last spring not only set an MHSAA girls record for most goals in a season, but also eclipsed the boys mark.

Kristi Vandeberghe, a standout at Mount Clemens, had set the previous girls record with 66 goals in 2001. The boys record of 76 goals was set in 2009 by Dearborn’s Soony Saad.

While both sports involve kicking, the vivacious senior said there are differences.

“In football, if you try to kick as hard as you can, like for power, the ball can go off to the side. In soccer, you want to kick it hard.”

Head football coach Nathan Ferency, who teaches health and physical education at the high school, had tried to convince Thompson to join the team since she expressed an interest as a freshman.

“I took my health class outside one spring morning and worked her out a little bit to see if she could kick — and she can actually kick,” he added with a grin.

Ferency immediately offered her a spot on the junior varsity team, but since she plays travel hockey in the fall, she opted to concentrate on that until this year.

Her high school soccer coach, Scott Thompson, also her dad, has no problem with her playing football, “and my (soccer) teammates think it’s cool and amazing,” the senior said.

“They’re very supportive of me. My (travel) coaches do not like it whatsoever. They’re not a fan.”

Her dad sees some positives coming from football.

“As her coach, I have no issues with her playing football,” he said. “She’s working on driving through the ball and working on her leg muscles.

“Being in high school, I didn’t see any issues. As a place kicker, she has minimal opportunities for getting hurt.”

Ferency is aware that soccer is her main interest.

“We want to preserve her senior year of soccer. That’s her love, and we want to make sure her goals are met.”

Thompson, who has committed to play soccer at Eastern Michigan University, said the hardest part of football is putting on the equipment, especially clipping down the shoulder pads.

“I wear youth large pads so they’re like the middle school pads, and it’s hard to get them clipped down,” she said, laughing while she demonstrated with her hands.

Pads also posed a bit of a problem for her debut.

“The first game, the girdle has the hip pads and the butt pads,” she said. “The pants have pads on the front and on the knees.

“I didn’t know you only had to wear one set. The first game I wore both and I had two pads everywhere. I didn’t know until the next game.”

Thompson said she is also developing her neck muscles.

“The helmet’s really heavy,” she said. “My neck’s getting strong.

“I have a big head, so I have to wear size large. But I got a new helmet that no one’s ever worn, so that’s good.”

Unlike the constant action in soccer, Thompson waits on the sidelines for the nod to play.

When she got the call during that first game, “I wasn’t really nervous because it happened super fast, so I didn’t really think about it,” she said.

“It was exciting. I’m supposed to keep my head down when I kick it so I don’t see it, but I looked up and saw it going (over).”

She almost had a chance for a field goal that would have clinched a win for the Eagles.

“Week 1, we were down two points late in the game and getting close to field goal range,” Ferency said. 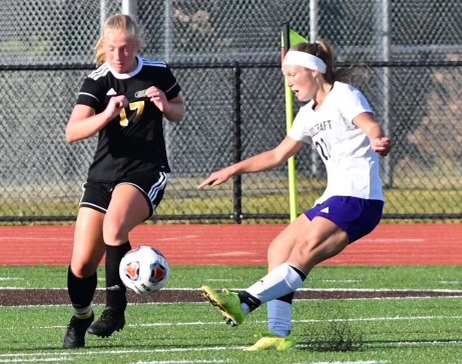 “Unfortunately we threw an interception before she had an opportunity, but I was prepared to let her kick the game-winner at that point.”

“She puts the work in,” Ferency said. “We go through her kicking game, and she conditions and runs with the team afterwards.

“She makes it a point to do everything she can to be a part of the team, and we accept her just like anybody else.”

Pressure in football and soccer is nothing compared to pressure she felt twice before in her young life.

When she was 5 years old, she was home with her newborn sister, Makenna, when their mother suffered a brain aneurysm.

“I called my dad, who was going out of town, and said mom’s not OK,” she said.

Her father came home and her mom, Alyssa, was rushed to the hospital where she was in ICU for 17 days.

“It was remarkable for a 5-year-old,” her dad said. “We had just taught her how to use the phone. She was very heroic.”

Ten years later, it happened again, but this time her father was away on business and could not make it home.

Although she had just a driver’s permit, she loaded her mother and sister into the car and headed to the hospital.

“She remembered that I said earlier that it would be quicker for me to drive her mom to the hospital than wait for an ambulance to find us,” her dad said.

“When she talked with me, I could hear the confidence in her voice. She handled that better than most adults would and she took care of her sister.”

He said that confidence carries over to everything his daughter does, and he is savoring this time with her, especially during her senior year.

“It’s more fun to watch (her play) as a parent, but it’s also very satisfying to help your daughter (as a coach),” he said. “No one can ever take that time back.”