To play receiver for the Eaglets requires patience, a selfless attitude and a player who doesn't mind doing the little things that only get noticed within the inner circle of the team.

Junior K.J. Hamler would be the primary weapon in many offenses, but he knows his role with St. Mary’s — make the blocks that keep the chains moving for a pound-and-ground attack.

When his number is called, he needs to make the most of it — and he usually does.

Hamler caught four passes for 63 yards and two touchdowns, as the Eaglets repeated as MHSAA Division 3 champions with a 29-12 victory over Chelsea on Saturday at Ford Field.

"I'm always prepared for anything," Hamler said. "I know we're a running powerhouse team. I've just got to prepare to block better. As soon as coach (George) Porritt gives our team a chance to pass the ball, I try my best."

A year ago, Hamler didn't have a catch in the championship game. Tabone had a minimal role as a passer, going 3 for 11 for 31 yards in a 7-0 victory over Muskegon.

St. Mary's ran the ball on its first 15 plays of this game before Tabone got the green light to go deep to Hamler. The Eaglets ran eight more plays before the next pass was called. They finished with 293 rushing yards on 56 carries, while Tabone went 5 for 9 passing for 79 yards, two touchdowns and an interception.

"I look forward to every pass play, because we don't throw a ton," Tabone said. "We have such great backs. It was really special to be able to have an impact on the game; I'll remember it forever."

"K.J.'s such a great guy," he said. "He's selfless. Whenever his number gets called, our eyes light up and we do our best to make a big play when we can."

The flashes of brilliance in the passing game added to a championship performance that was typical for St. Mary's — grind down the opponent with the running game and stifle it with defense.

Justin Myrick had 108 yards and two touchdowns on 20 carries, Troy Marks had 105 yards on 17 carries, Rashawn Allen had 55 yards on 13 carries, and Ryan Johnson had 22 yards on three carries to lead the balanced ground game.

"We have depth in our running backs, so if somebody gets hurt we can put in somebody else," said Myrick, who missed the Semifinal victory over East Grand Rapids with an injured hamstring.

Brandon Adams, who ran for the only touchdown in last year's championship victory, missed the game because of an injury sustained on his only carry in the Semifinal. 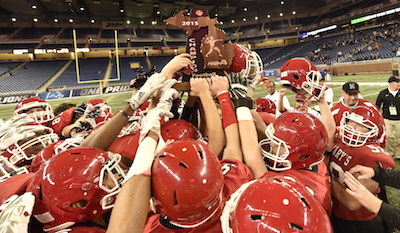 The Eaglets repeated as MHSAA champions for only the second time in 13 Finals appearances. They won back-to-back titles in 1999 and 2000, missing out on their three-peat bid in a 14-7 loss to Chesaning in 2001.

"At the beginning of the season, we were ranked No. 1 and all that good stuff," said junior linebacker Josh Ross, who had six tackles and an interception. "It was a lot of pressure. We had to come through it. We suffered a bad loss (31-8 to Warren DeLaSalle), which made us bond together as brothers. We came through all that adversity and won the state championship. I couldn't be prouder of our team."

It looked like St. Mary's might run away with it early. The Eaglets were leading 15-0 when they elected to go for a 33-yard field goal on fourth-and-inches from Chelsea's 17-yard line on their third possession. John Kwiecinski missed for only the second time in 10 field goal tries this season, opening the door for the Bulldogs (12-2) to get back in the game.

It took them only four plays to get into the end zone, as Graham Kuras took a reverse and heaved a 47-yard touchdown pass to Noah vanReesema with 8:22 left in the second quarter. Ralph Holley blocked the extra point, leaving the score at 15-6.

"That's our go-to trick play," Kuras said. "I was looking over for Noah. Usually, he's halfway across the field. This time, he wasn't. I was kind of lost on the play. I saw the safety get drawn up, so I knew he'd be open. I stepped up and threw it. I thought I overthrew it. I saw him step into second gear. That was probably one of the biggest plays in the game. Getting down 15-0 right away, we were kind of low on ourselves. Getting a score like that with the crowd behind us and boosting everyone's confidence was key to this game. Without that, it could've been much worse."

Chelsea was held to only 13 yards rushing on 22 carries, but was able to do some damage through the air. A 14-yard touchdown pass from Jack Bush to Cameron Cooper with 5:07 left in the third quarter got the Bulldogs within 22-12. A 2-point pass that would've made it a one-possession margin was incomplete.

The championship was within St. Mary's grasp once the defense came up with a big goal line stand on the following Chelsea drive. The Bulldogs had first-and-goal at the 3 but ended up with a turnover on downs with 5:39 left.

"That's our football," Porritt said. "That last drive was big-time for us. The last drive and the defensive stop were our M.O. for the year. The defense has come up big in some goal line situations. Our offense running clock and having long sustained drives has been our football strategy all year."

Bush was 13 for 21 for 145 yards, one touchdown and one interception. He was sacked four times.

While St. Mary's is a regular visitor to the championship game, it was the first time Chelsea made it this far.

"As sad as it is to be over, I wouldn't want to end it anywhere else with any other guys or any other team," Kuras said. "It was the experience of a lifetime."