Menominee will host Escanaba on Friday in the 121st meeting between two of the Upper Peninsula’s largest high schools and proudest football programs – but with the trophy celebrating the game still missing after it first disappeared more than half a century ago.

A decade ago, Escanaba Daily Press sports editor (and now Second Half correspondent) Denny Grall wrote about a newfound search for The Hinker Bell. But the mystery continues, and Grall’s story below tells of many of the twists and turns that to that point that had come in trying to locate it.

ESCANABA — Another search is underway to find the Hinker Bell.

The former locomotive bell went to the winner of the Escanaba-Menominee football game for about 15 years but has been missing for more than 40 years. It came from a locomotive owned by the Bay de Noquet Company and used on the LS&I Railroad that operated in Delta and Menominee counties.

The locomotive was built in 1906 by Baldwin Locomotive Works in Philadelphia and the bell was believed to have been cast in the railroad foundry, according to a 1953 newspaper clipping.

In 1948, one of the locomotive owners presented the bell to his friend, John Hinker of Menominee, an ardent sports fan who donated materials for the press box at Menominee’s Walton Blesch Field. 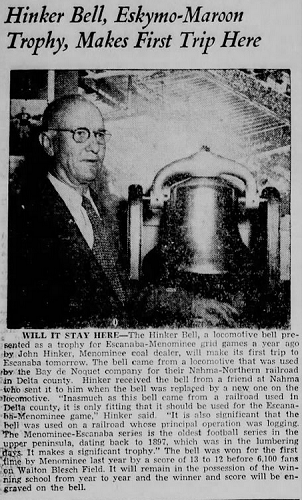 Hinker gave the bell to then Menominee coach Mickey McCormick and indicated proper use for the bell would be as an award for the gridiron rivalry.

Now Hinker’s great great nephew is trying to find the bell, which has not been seen since Escanaba’s current high school opened in 1963.

Tim Waters of Land O’ Lakes, Wis., who has launched the search, became interested by researching his family tree. “It is a big trophy (between 80 and 150 pounds by various estimates) and it is odd that it is missing,” Waters said in a recent telephone chat.

“One theory is that it is in somebody’s hunting camp or a home and they are using it as their own trophy,” said Waters.

“We have a pretty good investigation going on and all help is appreciated. If somebody does have it, we’re not looking to prosecute them. We’re just looking to get the darn thing back. Nobody will be in trouble.”

Waters refuted the old idea the bell was melted down. He has contacted numerous bell collectors, and they said a junk yard would have known it was worth a lot more than melted metal.

“The bell was not destroyed. We’ve come to that conclusion,” he said. “It was not put in a scrap yard.”

Waters contacted Coplan Iron and Metal of Escanaba and learned that bells were not melted or crushed and said the firm never accepted a bell with engravings matching the Hinker Bell.

Waters learned those businesses would sell them for the weight value to people who wanted them for yard ornaments/dinner bells, or to collectors.

“It is a treasure and it needs to be found,” said Waters.

Waters said the last known photo of the bell was with then EHS football coach Al Sigman and Esky players John Fisher and Phil Davidson in 1960. Escanaba beat Menominee from 1959-63 but could not find the bell in 1964 when the Maroons won. No one he has talked to remembers seeing the bell present at the first three games during the tenure of coach Jerry Cvengros.

The current Escanaba High School opened in 1963 and Bay de Noc Community College then occupied the old facility, which has since been demolished.

“Records indicate there was no report (of a missing bell) filed by Escanaba school district to the police department,” Waters said.

“The Hinker Bell is part of U.P. Michigan’s history, as is football and the railroads,” Waters said. “The people of Escanaba and Menominee deserve to have this trophy returned to their high schools.”

Waters, who has never seen an Escanaba or Menominee football game but is planning to rectify that omission this season, is hoping students at the two schools will join in the treasure hunt and talk about it with their parents and grandparents.

He would like to find a photo of the bell to help collectors in their search. “Each bell was for a special locomotive,” said Waters.

“If they have a good picture we can pass it around and say we are looking for this bell. If they can pinpoint what this bell was on, they can help get the word out.”

He has also extended the search to the website at upfootball.com, which has generated interest but no bell. “If the bell is in the area still today, I don’t think it will take long to surface,” he said.

“If we don’t find this bell, we are going to try to make up a replacement as close as possible if the two schools are interested in that,” he said.

Waters is hoping that real estate agents, postal workers, delivery personnel, construction workers, etc., may have seen the bell during their travels and can help retrieve it.