TRAVERSE CITY – For 50 years, John Sonnemann and Don Wiitala have put their hearts, souls and voices into Traverse City athletics.

"It keeps us young and involved," Sonnemann said. "I think Don feels the same. We feel like we're part of the program - and that's important to us."

That was the year Glowicki approached radio station WLDR, which had just gone on the air in July, about broadcasting high school sports.

"We weren't thinking about doing sports," Wiitala said. "We were just trying to keep our heads above water."

After some discussion, though, WLDR took the plunge.

"We said we'll give it a try," Wiitala recalled. "I wasn't even a broadcaster. I was the sales manager."

It remained that way until about eight years ago when WLDR dropped its game coverage. But WLJN stepped in, picked up football, and Wiitala continued on as the Voice of the Gladiators.

"Who would have thought that 50 years later I'm still in the broadcast booth," Wiitala said. "I never realized how close I would grow to the St. Francis community. It's been a wonderful (association)."

Wiitala, 79, was inducted into the Grand Traverse Area Catholic Schools Hall of Fame this month.

"Don's a class act," St. Francis athletic director Tom Hardy said. "He does things the right way. He's part of our family. When you talk about St. Francis football, one of the first names to come up is Don Wiitila. He's brought St. Francis games into so many homes. We are so fortunate, so lucky for his dedication." 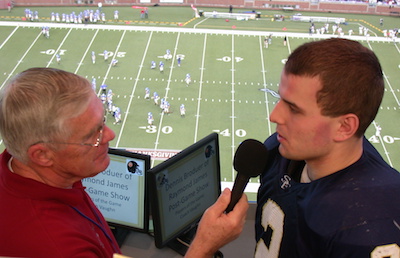 Back in 1966, Sonnemann had just graduated from Michigan State University when he landed a job as a social studies teacher at Traverse City Senior High. He had done his student teaching at the school the previous year and worked the chain gang during the football season – so his indoctrination into Trojans football had already started.

Soon after he was hired, Menzel called him into his office.

"He grabbed me by the knee and said, 'I want you to announce on Friday.'" Sonnemann said. "That was it."

To this day, the 72-year-old is synonymous with Traverse City Central sports.

"It's been a pleasure," the Voice of the Trojans said. "I've enjoyed all 50 years, although it doesn't seem like it's been that many,"

Sonnemann was honored for his work during the Central-West game in September.

"Remarkable," Central athletic director Mark Mattson said in describing Sonnemann's career. "The best part is that John is one of the most gentle, kind human beings that you'll ever meet. To have that legendary voice be part of your program for 50 years is special."

Sonnemann, who retired as the school's athletic director nine years ago, still announces a number of school and community events. On any given day in the fall, he can be seen and heard at Central football, soccer and volleyball games.

He said he has a hard time remembering when he retired because he's still so active doing what he loves.

"Some people would say I flunked retirement," Sonnemann said, laughing.

He, of course, does not see it that way. Neither does Wiitala. Their jobs, they say, energize them.

So when people ask how much longer they'll keep announcing, their answers are similar.

On fall weekends, Thirlby Field is their home away from home. 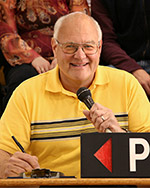 Sonnemann recalled a game in 1970 when the Trojans lost 2-0 to Bay City Central, coached by the legendary Elmer Engel.

"They were the cream of the crop in the state," he said, "and that's where Traverse City wanted to be."

Wiitala recounted the 28-26 loss to Detroit dePorres in 1983 – the school's first trip to the Pontiac Silverdome – when the Eagles scored late to pull out the victory.

"To this day I still remember this kid from Detroit dePorres, with about a minute and a half left, laying out horizontal to catch a pass in the end zone for a TD," he said. "That play has run through my mind hundreds of times over the years. I don't know why. Had he not caught the pass, St. Francis would probably have won the game."

Sonnemann witnessed two of the most dramatic last-second wins in Trojans history – 21-20 over Muskegon Catholic in 1975 and 22-21 over Muskegon in 1985. The Muskegon game was on the road so Sonnemann was there in another role – as the advisor, he had taken the school's pep club to the game. The Big Reds had surged to a 21-14 lead on an interception return for a score in the final minute. It seemed like that would be the play that would decide this battle between the two 5-0 heavyweights.

But on the last play of regulation Central quarterback Chris Hathaway connected on a pass to Jeff Durocher, who then pitched the ball to Doug Lautner, catching the Muskegon defense by surprise. Lautner raced the final 33 yards to the end zone to pull the Trojans to within a point. Coach Jim Ooley opted to go for the win, and Hathaway hit Durocher on the winning two-point conversion.

Trojans fans who were there reveled in the win, except the bus driver.

"The bus driver had gone out to warm up the bus and missed the end of the game," Sonnemann said. "When we got on the kids were hootin' and hollerin' and just having a good time. They were so excited. The bus driver looked at me and said, 'If they're this excited after a loss I would hate to see what they would do after a win.' I had to tell him, 'We won it.' It (the suddenness of the win) felt a lot like that MSU game the other day."

Wiitala has been a fixture at the MHSAA Finals – football and basketball – covering St. Francis, as well as other area schools.

"When St. Francis got beat (in the tournament) we would pick up the next team that was going well," he said. "People in those communities appreciated that."

Wiitala said when he first started broadcasting games there were a number of radio stations doing likewise. That's not the case now.

"Stop and think about it," he said. "When St. Francis was in the North Central Conference (in the 1980s) five schools had radio stations broadcasting games. Now we hardly ever see another station at a game."

Wiitala became the majority owner of WLDR in 1972. He would remain the owner for nearly 30 years. When he sold, the station continued to broadcast St. Francis football games with Wiitala on play-by-play. He’s continued in that role now that WLJN has taken over the broadcasts.

The Mesick graduate has never strayed from the hometown feel of his broadcasts. He still conducts pre-game interviews with the coaches, profiles other school activities at half, and has several players come up to the booth for postgame interviews.

"I know people who get in their cars after the game and then turn the radio on to hear the kids (comment on the game)," he said.

WLJN also offers an internet broadcast, which allows St. Francis fans across the world an opportunity to listen. Wiitala often asks fans to send him e-mails during a game and he's always stunned when he learns the locale of his listeners.

"We've received emails from alumni in Iraq, Iran, Hawaii," he said. "It's unbelievable."

Wiitala has had numerous analysts on the broadcasts over the years. For the last five years, Sonnemann has served in that capacity when there's not a conflict with a Central home game. When there is?

Well, often times, Sonnemann is on assignment. Once fall sports end and winter sports begin, he'll switch to boys and girls basketball, wrestling, hockey and every so often downhill skiing. In the spring, it's on to track and field, girls soccer and graduation, which takes advance work to make sure it's done right.

"One of the things I pride myself on is pronouncing names correctly," he said. "Mine has been mispronounced enough times that I think it's important to get those names right the one time they get to shine up there on stage."

Sonnemann, who always has the best seat in the house, also takes pride in how he presents himself. He wants to make sure that he's always fair and objective.

"I try not to be partial to one team or another, although certainly I bleed black and gold," he said. "I try to call the games in as fair a manner as possible. Some announcers will try to emulate what you hear in the pros, especially the NBA, and I feel that has no place in high school sports. You should treat the visiting team as equally as you treat the home team."

Wiitala has a belief he stands by, too.

Like Wiitala, Sonnemann plans to continue keeping fans abreast of who's doing what on the field, the court, the pitch, the ice, the mat, the track and the slopes.

"As long as I still enjoy it, as long as I'm still healthy, I'd like to keep doing this," he said. "I'm not setting any timetable."