J.J. Wagner is economical with his words, stoic on the sideline, and not preoccupied with statistical trends. All he really asks of his Three Rivers football players is to play and sacrifice for one another.

It’s been a pretty good recipe throughout his 13-year tenure as the head varsity coach of the Wildcats, at least in the years when the players truly held up their end of the bargain. With an 82-50 career record since 2005, Wagner has seen what can happen when everyone is pulling in the same direction, like a 13-0 run that ended with a loss in the 2009 Division 4 Final.

He’s also witnessed how complacency can cut a program right back down, as was the case in 2010 when an experienced Three Rivers squad went 4-5 and missed the postseason.

The Wildcats have been noticeably hungrier the last two years, with a 7-3 mark in 2016 and an 8-2 record this year as they prepare for Friday’s Division 4 District championship game against Edwardsburg.

Eleven games into the year, Three Rivers has been unable to break out of a Wolverine Conference bubble. The Wildcats went 7-2 in the league, with losses to Dowagiac (Week 2) and Vicksburg (Week 9). Revenge was sweet last Friday as Three Rivers beat Vicksburg in the Pre-District game (20-10).

Now, the difficult task of beating the league’s most dominant team for the second time in one year is what’s required to move on in the playoffs. If Three Rivers can beat the Eddies (after also doing so 21-18 in Week 7), there’s a chance they’ll face Wolverine Conference member Plainwell in the Regional Round.

“You get through the Wolverine (schedule) and then you’re suddenly in a mini Wolverine tournament,” Wagner joked.

There are no secrets in terms of playoff prep against such familiar foes, so it’s all about the basics.

“Our offense has been moving the sticks, our defense has been playing well, our special teams have played well and we play well when we don’t turn the ball over,” he said.

Having played for perennial power Mendon, where he registered 253 tackles as an outside linebacker during the 1987-89 seasons, Wagners’ emphasis on that side of the ball has been a hallmark of the 2017 campaign. Three Rivers has only allowed 11.7 points and 203 yards per game. The Wildcats have stopped opponents on third down 79.8 percent of the time.

“Anytime you’re playing good defense, you can take a few more chances on offense,” Wagner said. “I don’t know how many times we’ve gone for it on fourth down this year, but it’s probably more than most (years). You can take a chance at midfield or the 40 that maybe you wouldn’t normally.”

Perhaps no player has embraced Wagner’s rule of doing what’s best for the team more than Hausmanis, who likely would have garnered a lot more attention from college coaches had he stayed at tight end. Instead, he’s anchored both lines the past two seasons.

“We all just do our jobs,” he said. “This happened and we weren’t big enough (on the offensive line) for me to play tight end. They needed me at tackle. At first I didn’t really like it, but I had to get used to it because it was what was best for the team. It helped us succeed and win, so I had to do it.” 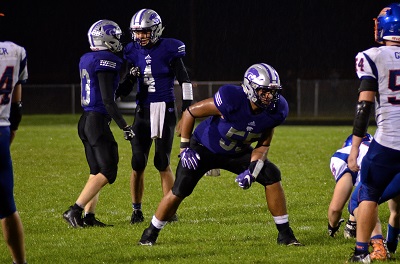 His defensive stats might not seem that impressive — 30 tackles with two sacks — but it’s what he’s capable of that impacts the game so severely.

“It helps when you know people are going to run away from (Hausmanis), so you can stunt and play games on the other side that can mess with their protections and blocking schemes,” Wagner said.

Wagner admitted he’s not big on stats, but for those who were wondering about how many times the offense has felt comfortable gambling on fourth down because of a belief in the defense, it’s 27. The Wildcats have converted 15 times (55.6 percent).

Other than knowing the defense could likely bail it out if needed, there’s been plenty of confidence in the offense under the leadership of junior quarterback Jalen Heivilin.

With a 22-6 touchdown-to-interception ratio, an average of 214.6 passing yards per game and a completion rate of 61 percent, the first-year starter has settled in nicely. Classmate Gavin Charvat has been Heivilin’s favorite target as the two have connected 42 times for 562 yards and six touchdowns. Bryce Morlan was next in line with 32 receptions for 549 yards and a team-high 11 TDs, but the senior went down in Week 9 with a torn anterior cruciate ligament. Fortunately for the Wildcats they also have reliable receivers in Jett Haifley and Zac Meyer; each has hauled in 23 passes for around 400 yards.

“When we play mistake-free, which is what we harp on, and eliminate pre- and post-snap penalties, you can win a lot of games,” Wagner said. “That’s what we focus on every week. If you can do that, you’re going to keep yourself in a lot of games.”

That was exactly the difference in Three Rivers’ home win against Edwardsburg on Oct. 6, which snapped a 34-game Wolverine Conference winning streak by the Eddies.

“We have to play with that same energy and effort (against Edwardsburg),” Wagner added. “In both of our losses, we came out kind of flat. If I knew why, we wouldn’t do it. We think we can go in there (at Edwardsburg) and play them tough again. It boiled down to mistakes in that (first meeting). We made our extra points, and we held them on all theirs. If we go in there with the same discipline, there’s no reason we can’t beat them again.”

PHOTOS: (Top) Three Rivers’ defense lines up for a play; it’s been stifling this season giving up only 11.7 points per game. (Middle) Receiver Nolan Mark and quarterback Jalen Heivilin (4) talk things over against Edwardsburg. (Photos courtesy of JoeInsider.com.)