And talk about small, Unity is by far the smallest school in an Ottawa-Kent Conference Green that sent four teams to the playoffs and champion Zeeland East to the Division 3 Semifinals.

So before Saturday’s Division 5 Final at Ford Field, coach Craig Tibbe reminded his now 47 players (including moved-up freshmen and sophomores) they hadn’t been picked to make it this far – and probably weren’t the choice to win this game.

But the Crusaders absolutely belonged in their first MHSAA Football Final – and deserved to hoist their first championship trophy in this sport after handing Portland its first and only defeat this fall, 42-7 in a game Unity controlled from just about the opening kickoff.

“We’re not supposed to win. But our coaches put a gameplan in for us to win,” Crusaders senior defensive back Noah Wiswary said. “And every week, we go to practice and we can’t hit because we only have 20 guys that can play, so we can’t hurt each other. But we work on our gameplan. We know what we’ve got to do to get to our spots. And we do what we’re supposed to do.”

As noted, the championship was the first in football for Unity Christian, which has had great success in other sports, especially soccer, where the Crusaders girls have won 10 MHSAA titles and the boys have won five.

The football program got its start only in 2003, with this season’s 12-2 finish setting a record for wins and also including the Crusaders’ second trip to the Semifinals after they first advanced that far two years ago. 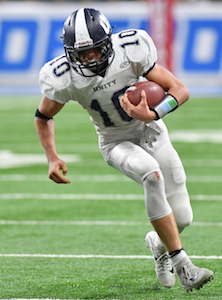 Tibbe’s pregame challenge ran parallel with the pep talks offered throughout a playoff run that might have been the toughest road of any team in any division over the last five weeks.

Unity Christian – which was ranked No. 10 in Division 4 by The Associated Press during the regular season before slotting in Division 5 for the playoffs – downed reigning Division 5 champion Grand Rapids West Catholic and four teams ranked among the top six in the division. In addition to No. 2 Portland (13-1), the Crusaders eliminated No. 1 Saginaw Swan Valley in the Semifinal, No. 4 Kalamazoo United in the Regional Final and No. 6 Muskegon Oakridge in the District Final.

Against Oakridge, Unity Christian trailed by 27 before charging back for a 40-37 win. Like Portland, Kalamazoo United and Swan Valley also were undefeated before Unity dealt them their only loss.

“They’ve done that each week. They’ve pulled for each other,” said Tibbe, who has led the program since its start. “I’m proud of what they’ve become as a group of guys.

“Part of that comes from we have to battle all the way through the teams we’re playing each game of the season, (and) low numbers, but they learn to fight. And I thought they did a nice job again today.”

It didn’t take long to get rolling. Both Unity and Portland boasted strong running attacks this fall – what they planned to do Saturday was no secret. But the Crusaders built a 28-0 lead five minutes into the second quarter having rushed for 173 yards while allowing the Raiders only one first down to that point.

The Crusaders ran for 279 yards on 50 carries total, with junior quarterback Isaac TeSlaa rushing for 97 yards and two touchdowns and also competing 3 of 4 passes for 70 yards and a score to senior TJ VanKoevering. Junior Hayden Large and seniors Max Buikema and Mason Odehal also ran for touchdowns.

The defense – led by junior defensive back Nick Tibbe’s nine tackles – pitched a shutout as Portland’s only points came on senior Jacob Veale’s 91-yard kickoff return touchdown with four minute to play in the third quarter.

Portland ran for more than 3,000 yards over their first 13 games, but for only 95 on 29 carries Saturday. Senior defensive back Hunter Hohman led the defense with 10 tackles and a forced fumble.

“Obviously we got beat up a little bit up front, both sides of the ball,” Portland coach John Novara said. “Their offensive and defensive lines played great. They’re a super athletic football team, and they’ve just got athletes all over the place … probably the most athletic football team we’ve played all season. We don’t get (shut down) too many times, but they did it to us today.”

Portland did tie its program record with 13 wins this fall, its fourth straight with double-digit victories. The playoff run was the Raiders’ longest since they won their first title in 2012.

“It’s still kinda surreal that we’re here. We had to replace a ton from last year. We had no skill kids coming back, and the kids really stepped up,” Novara said. “We started out really slow this season. … (But) I think we made a great playoff run. I know we were 13-0, but we got a ton better during the playoffs.”