But he’d be the first to point out that the Orioles put the finishing touch on their first perfect and championship season because of the effort on the other side of the ball as well.

Nowak capped a three-year varsity campaign rushing 39 times for 199 yards and three touchdowns and throwing for another score as Morrice broke away for a 44-16 win over Pickford to claim the 8-Player Division 1 championship – the Orioles’ first state title in this sport. They also finished 13-0.

And his defense played a big part in making that possible, locking down a Panthers offense that entered the Final averaging 54 points per game and also unbeaten.

“I told them before, going in, ‘Boys, this is your last game. Just sell out,’” Morrice senior linebacker/fullback Connor Lucas said. “’Leave it all on the field. Do not regret it.’

Defense has not been a hallmark of the first decade of 8-player football in Michigan. But Morrice seemed to figure it out this fall.

The Orioles gave up 78 points – a mere six per game – and from mid-September through the first week of the playoffs posted six straight shutouts.

Morrice gave up a respectable 21 points per game in going 9-2 in 2017, playing a basic 4-4 scheme. But leading tackler Lucas said this season the defense rotated through about 20 formations.

Pickford’s lowest point total this fall had been 38 points in a Week 3 win over Crystal Falls Forest Park.

“They were quick, they were strong … they were aggressive,” said Pickford junior quarterback Jimmy Storey, who went over 1,000 yards rushing for the season with 92 Saturday, but completed only 4 of 17 passes. “They were really aggressive and tough, and gave us a run for our money.”

Pickford junior running back Stephen LaMothe opened the scoring with a 14-yard run only 2:39 into the game.

But Nowak followed with 45 and 4-yard touchdown runs and a 15-yard scoring pass to senior Austin Edington to take a 22-8 lead into the break. “Going into the locker room at halftime, and we were up, we could definitely tell they were kinda surprised,” Lucas said.

Nowak opened the second half with another scoring run. LaMothe – who finished with 99 yards rushing on 14 carries – broke a 60-yarder at the end of the third quarter to make the score 30-16. But Edington pulled the Orioles away with 54 and 6-yard scoring runs in the fourth quarter. 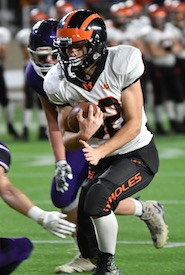 “Once we started the game, started gaining a little momentum, we could see some of our run plays were working better than what we thought they (would),” Morrice coach Kendall Crockett said. “We were moving the bigger men on the other team, and Hunter just made the lanes work, and Austin, and Connor was blocking and the plays work. When you design them, and they work in a game, it’s fun to watch.”

Crockett took over the program five seasons ago when Morrice switched from 11-player, and brought to the gameplan some of the spread scheme from his time as an assistant at DeWitt. “When I took over the job in 8-man football, I didn’t have a clue what I was doing,” he said. “I looked to some of the more experienced coaches – Rob McDaniel from Peck, Deckerville, you look to those different coaches to find out what worked for them. We tried their stuff, and that’s when we decided we had to go our own way and see what works for Morrice.

“We came up with the system we have today, and you know what – speed, especially out here, speed hurts.”

Morrice’s previous longest playoff run was to the Class D Semifinals in 1996. The Orioles went 9-2 three seasons ago but fell back to 4-5 in 2016 before starting a two-year climb to history.

“We’ve been dreaming of this since we were in third grade playing together,” Nowak said. “Our sophomore year, things didn’t go right. Last year we made the playoffs, we didn’t do too well. But we knew this year was the year to do it. We played every game super hard, went undefeated – just everything worked out.”

Pickford capped its third straight season of making the Semifinals with its first trip to a championship game. The Panthers will graduate just two of 18 players on Saturday’s roster. Crockett said he saw in the Panthers’ junior class the potential to do what his seniors accomplished this fall.

Senior Chase Warner had 12 tackles for Pickford, while Storey and junior Isaiah May both had 10. Senior Beau Dietz had 10 tackles to lead Morrice.

“We’re going to have to remember it, and work that much harder in the offseason,” Storey said. “We gotta come back next year and get it.”

PHOTOS: (Top) Morrice’s Austin Edington dives for the end zone for one of his three touchdowns Saturday at the Superior Dome. (Middle) The Orioles’ Hunter Nowak breaks past a Pickford defender. (Photos by Cara Kamps.)