Long treading near the bottom of the highly-competitive Oakland Activities Association, Rochester football has parlayed a revamped practice schedule with a young quarterback and a break in scheduling into one of the best starts in program history.

Erik Vernon in his 11th season as Rochester’s head coach, and he and his staff – notably defensive coordinator Nick Reed – were confident that this season had the potential to be something special.

The Falcons (4-0) are averaging 49 points a game, the defense has earned two shutouts, and Rochester is on the verge of completing what would be the fourth undefeated regular season in school history.

Not since 1993 had Rochester won its first four games. That season the Falcons finished 9-0 before losing to Detroit Henry Ford in an MHSAA Class AA Pre-Regional.

Beyond Vernon, his staff and players, few would have imagined Rochester starting this season in such dominating fashion, highlighted by a 42-20 victory over Bloomfield Hills on Oct. 2. Should Rochester defeat two other much-improved teams – Ferndale (3-1) and Berkley (4-0) – in its final two regular-season games, the Falcons would finish 6-0.

Nevertheless, Vernon said much was accomplished despite these rather disappointing results.

“It’s been fun,” Vernon said of his team’s quick start. “We’ve had some rough years. We’ve been lucky. The offensive line is playing well, and our skill players are good.

“The guy who really makes us go is a sophomore. He’s our quarterback, Alex Bueno. He’s completed 80 percent of his passes and thrown 13 touchdown passes and no interceptions. It’s impressive. He’s the one who makes the difference.”

At 5-foot-10 and 165 pounds, Bueno won’t wow anyone with his size. But don’t be misled. Bueno is a playmaker and has shown the upperclassmen he has the leadership qualities expected of his position.

The experience Bueno gained last season playing against teams like Birmingham Seaholm and Lake Orion has paid dividends; Lake Orion was 9-2 last fall and Seaholm was 9-4 and reached an MHSAA Division 2 Semifinal. Rochester and Bueno took their lumps in both, but there were lessons to be learned.

“(Bueno) has a presence on the field,” Vernon said. “He’s got a lot of confidence. That confidence piece is huge. We got beat bad by Seaholm and Lake Orion, but he made some plays.”

Bueno has had help. Lots of it. Let’s start at the receiver spot, where all four starters return led by senior Bobby Kronner. Kronner led his team in receptions as a junior and is the leading receiver again. He has average size (6-0, 160) but, like the vast majority of his teammates, he’s a multi-sport athlete who uses his athleticism to create opportunities.

Senior left tackle Noah Howes (6-4, 260), a heavyweight wrestler, is one of two starters back on the offensive line. And the defense is one of the best Vernon has had during his tenure. This unit has recorded 27 tackles for losses to this point. Last season the defense recorded 24 TFLs. 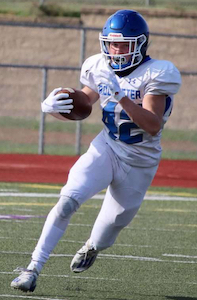 Much of the credit for the improvement on defense goes to Reed, a starting linebacker the last time Rochester qualified for the playoffs in 2010.

“We stop the run really well,” Vernon said. “We rotate kids in and out, and they read their keys well. We’re tackling well, and we play fast.”

Safety Kavan Troy is the sparkplug of the defense. A senior, Troy was an undefeated Division 1 wrestling champion (103 pounds) as a sophomore. He’s weighs 145 pounds now, and it is that toughness earned on the mat that makes Troy such a rugged competitor.

Vernon, like Reed, teaches at the high school, and he also doubles as the head wrestling coach. He attributes much of the success this season to a change in his practice schedule. Two years ago, when these seniors were sophomores, Vernon began having the junior varsity practice with the varsity. The result is the younger players have the opportunity to test their skills against players much bigger, faster and more experienced than themselves.

It was a learning, and often humbling, process. But the switch has produced positive results.

Kronner was on the junior varsity then and is convinced he’s a better player having acquired that experience.

“Sure, you’re getting your butt kicked in practice,” Kronner said. “But you’re going against kids who are bigger than you, and when you’re practicing with the varsity, you’re learning what they do. Usually on JV you run what the varsity runs, but just the basic stuff. It’s a completely different game at the varsity level. It’s faster. Now, it’s become second nature for me.”

Vernon also went to a two-platoon system, and this has helped to create depth on his 40-player squad.

He also said the new rule that allows athletes to play five quarters per week has aided his staff in using players, perhaps on the bubble between the junior varsity and varsity levels, more freely. For example, if a sophomore plays three quarters in a junior varsity game, that player is allowed to play in two quarters of a Friday night varsity contest. Even if that player doesn’t see action, it allows him or her to be a part of the varsity and experience, in uniform, a varsity game.

Scheduling has played a factor. While a recent member of the OAA White (2014-15, 2017-19) Rochester had a combined 8-37 record. When it competed in the Blue (2016), a step below the White in competitiveness, Rochester finished 5-4. This season the Falcons were again moved down to the Blue. The result was Rochester doesn’t have Oakland County traditional powers like Oak Park, Rochester Adams, Birmingham Groves and Lake Orion on its schedule.

But the league move doesn’t diminish the success the Falcons have had to this point.

Regardless of the circumstances, the players, specifically the 15 seniors, have made significant progress over three seasons. These seniors were 1-8 as members of the freshmen team. The next season the junior varsity was 6-3. Yes, Rochester was 1-8 last season, but the returnees have matured and the addition of Bueno as a full-time starter can’t be overlooked.

“Going into this season the attitude was different,” Kronner said. “(Bueno) has gotten a lot better. He’s bigger, physically. He was tiny last year. You know, he was that little freshman kid. What I did notice last year was that he had a cannon. Even as a freshman, he was reading the defenses. For most freshmen, you’re not reading the defenses. He had more football knowledge than your normal freshman. He’s emerged as a leader. He’s leading some of the older guys. He leads verbally and by example. He’s confident in his abilities. He should be. He’s talented.