Getting to the postseason wasn’t the issue for the Cassopolis varsity football program, which is currently ranked No. 6 in the latest Associated Press Division 7 poll and has earned playoff berths 11 times since 2000.

It was taking that next step.

Now in his fifth year guiding the program, head coach Dan Purlee, a Cassopolis graduate, former athlete and longtime assistant coach, helped push the school past that barrier. And 2016 was the program’s banner year.

The Rangers ripped through all their opponents last season except for a talented Buchanan squad in Week 5. Throughout their 8-1 run during the regular season, the Rangers were on the right side of a 365-130 scoring differential. They went on to outscore their first three playoff foes 141-49.

Cassopolis, which also boasted a 4-0 mark to win the Berrien-Cass-St. Joseph Conference Red championship, finished last year 11-2 with a 54-22 loss to Detroit Loyola in the Division 7 Semifinals.

Just a year earlier, Cassopolis recorded a 9-3 record in 2015, falling to Pewamo-Westphalia in the Regional round. The Rangers’ 48-14 victory against Bridgman that fall earned the program its first District championship.

“We’ve put together a few good years here,” said Purlee, whose team, led by six returning seniors, is 6-0 heading into Friday’s game against Southwest 10 Conference opponent Hartford. “We’re playing pretty good football, but you always feel like there’s room for improvement, and there is. But we like where we’re at this year, and we’re proud of our success and accomplishments over the previous few years.”

Purlee doesn’t easily accept the credit. He promptly shifted the focus to the student-athletes and his astute assistants, including Michigan High School Football Coaches Association Hall of Fame inductee Jim Myers, who has 42 years of coaching under his belt and previously was the head coach at Niles Brandywine. And there’s also Steve Green, who has been coaching alongside Purlee at Cassopolis the last 18 years.

“We’ve done it together,” Purlee said. “Your coaching buddies — it goes beyond coaching. They’re like your brothers.”

“He’s a professional,” Brawley said. “He’s extremely detailed and has a game plan for every situation. He’s very impressive to watch.”

Brawley also pointed out that, with a current team grade-point average of 3.40, a second consecutive academic all-state award is on the horizon.

Running the full house T formation offense, no one player has had to carry the load. Statistical information was only available through the Rangers’ first five games, but senior Brandon Anderson and junior Tyrese Hunt-Thompson had combined for nearly 500 rushing yards and 14 touchdowns. Senior quarterback Xander Smith had rushed for more than 250 yards with a couple passing touchdowns as well.

Junior Hunter Parsons had rushed for 266 yards through five contests, and quarterback Dylan Green has been responsible for four passing TDs. Keep in mind, most of the starters have watched the second half from the sideline most of the year with games well in hand. 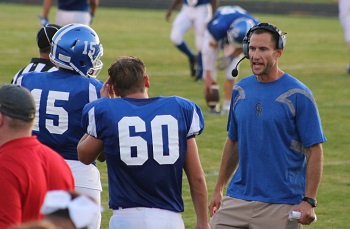 “We have the ability to run a little shotgun spread,” Purlee said. “We’re pretty diverse offensively. Teams were really loading up the box on us and we’re not traditionally very big up front, so we realized we were going to need to counter that with spreading the field a little bit.

“We’ve just had a stretch here where we’ve had some kids who are extremely athletic and can catch the ball and quarterbacks that can throw the ball. We can pound it up the middle and also spread you out.”

“We’re all comfortable with each other,” Lanier, a three-year varsity player, said. “It’s trust. I feel like if I don’t make a play, I’ve got Hunter Parsons right next to me coming up to make the tackle. Our secondary likes to come up and make plays. Our lines are disciplined.

“When I was younger, it was more coming downhill, filling holes and blitzing. As I’ve gotten older, it is recognizing where the ball is going, watching linemen, seeing what they’re doing, watching a pulling guard … getting smarter rather than just running to the play.”

The Rangers, who have given up only 28 points all year, pin their ears back and keep the pressure on every snap.

“I think there are several factors,” Purlee said of his program’s building success. “We’ve had some really good players over the past few years, and we have some athletic and tough kids. When you have that, you can put together a pretty good football team. I feel like our coaches have done a great job in helping instill discipline. It’s a team that executes in all phases of the game. We work hard, and we’re well prepared. It’s a collaborative effort between good players, good coaches and the right type of kids.”

Instead of being content, having tasted this kind of success has only intensified the team’s appetite.

“They have been a committed group. They’re extremely focused,” Purlee added. “Obviously, we’re proud of what we’ve done the last two years, but we want to go further. We’re not going to limit our goals. The next step for us is to play in Ford Fieldhouse.

PHOTOS: (Top) Casspolis' Tyrese Hunt-Thompson (2) follows his blockers into the line against Marcellus last week. (Middle) Rangers coach Dan Purlee confers with one of his linemen on the sideline. (Photos by Billie Austin.)