Monday Run Day for the Colon varsity football team is far from a fun day. But the Magi have embraced the burning in their lungs, the cramps and the piercing sound of the next whistle sure to bring on more agony.

The grueling session of sprints follows study hall and weights. Then position groups work on their particular craft. And as the sun sets, the long day finally ends with a thorough cleaning of the locker room.

As third-year coach Robbie Hattan began the interview for this story Monday, he paused for 30 seconds to survey the grounds surrounding the football field, taking mental notes as to which players stuck around for even more voluntary cardio.

“The biggest thing that was a change in culture for Colon was the work ethic in the offseason,” said Hattan, whose team is 6-0 and ranked No. 2 in the latest Associated Press 8-player poll behind Pickford. “We went from maybe having 10 kids in the weight room two summers ago to no less than 25. These kids are working hard. We’re in Week 7 and these kids are working like they’re in two-a-days.”

It’s paying dividends as the Magi have outscored opponents 122-40 during the second half this year.

“We make sure we get a lot of cardio in and make sure we’re conditioned enough to get to the fourth quarter,” 6-foot-5, 190-pound senior lineman Brenden Shelton said. “We end up running a lot of teams down because they just can’t hang with us. It’s a noticeable difference, especially from the beginning (of the year). What we did today (in practice) we probably wouldn’t have been able to do (at the beginning of the year). When we’re playing in the fourth quarter, you can see it in the other team. They’re gassed, and we’re firing.”

Colon also has earned its first conference championship in school history. The Magi wrapped up at least a share of the Southern Central Athletic Association A division title with last week’s 51-0 win over Camden-Frontier.

Colon made a calculated move to 8-player this year, but not because of dwindling participation numbers. In fact, with 34 players, the program is healthy compared to other small schools still playing 11-player football.

The cost of scheduling opponents all over the state to fill out a nine-game slate, along with the possibility of lower participation in the future, were considered.

“That’s not smart with our taxpayer dollars,” Hattan said of long treks from past seasons. “Now, we still have our identity. We still have games here on Friday nights. Now, with more schools going to 8-man, the competitiveness and the level of play (have improved). If you would have come here and watched Colon versus Bellevue and you would have thought that wasn’t a football game, I would have called you a liar to your face.

“That was a smash-mouth, hard-hitting football game. The more schools you get, you’ll find that middle ground. When 8-man first started, you were getting so many blowouts. You were either really good or you were really bad. We still have our blowouts, but we had that in 11-man. But it’s few and far between now.”

Schematically, Hattan initially overcomplicated the transition, thinking an overhaul of the offense might be in order. Following a conversation with Crystal Falls Forest Park coach Dave Graff at a summer clinic, the plan became simple and clear. 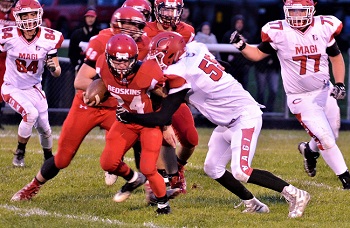 “He said, ‘Hey, run what you run, but just run it in 8-man.’ We started playing with some stuff with the veer and how we could still be an option school,” Hattan said. “Colon has always been an option school since Coach [Spencer] Henley was here. We know we have some good running backs and some speed, so we just started implementing our option offense. Now we’re getting a little more creative with our options and motions. We’re getting more out of our kids. The option is great because you can leave two guys unblocked every single play and you’re good.”

Sophomore running back Brandon Crawford has racked up 862 rushing yards and 14 touchdowns on 99 carries through six games. Junior quarterback Phillip Alva has added 569 yards and 10 TDs on 64 carries. Junior Jonathan West and freshman Kaleb Johnson have combined for 476 yards and six TDs.

Crawford played as a freshman and finished with just over 600 yards last fall.

“It definitely humbled me. Coming into the season, I thought I was just going to start instantly,” he said. “But seeing how much bigger everyone was made me want to push myself harder.”

Though the Magi certainly don’t focus on the passing game, Alva and West have connected on three touchdowns through the air.

Defensively, senior linebacker John Ruby leads the squad with 59 tackles (six for a loss), Crawford has notched 42 (two for a loss), and Shelton has made 35 stops (14.5 for a loss).

“John Ruby is a stud,” West said. “He can lay a hit and fill a hole. Crawford really gets in there and can lay a hit. Shelly (Brenden Shelton) never lets anyone get outside of him.”

Added Alva: “I believe it’s just buying into the program with Coach Hattan. He’s building a pretty good program from Rocket all the way through high school with the weight room and everything. Every single kid is buying into it. I think that’s why we’re doing as good as we are.”