He’s been at the helm of the Mancelona football team for 16 years. During that span, the Ironmen had back-to-back undefeated seasons, a few with a handful of wins, and a winless 2017 campaign.

Now, the Ironmen are 5-0 for the first time since 2012 and facing the biggest game of their season.

Tonight they’re hosting conference rival Boyne City, also undefeated in the Northern Michigan Football League Leaders division. A win puts Mancelona in the driver seat with a trip to Charlevoix and a hosting of Glen Lake left to round out the regular season.

A potential conference title, postseason qualification and a drive toward a state championship have been on the team’s list of goals since the summer. The Ironmen are coming off a 3-5 2020 finish.

“Every season is different … you never know.” 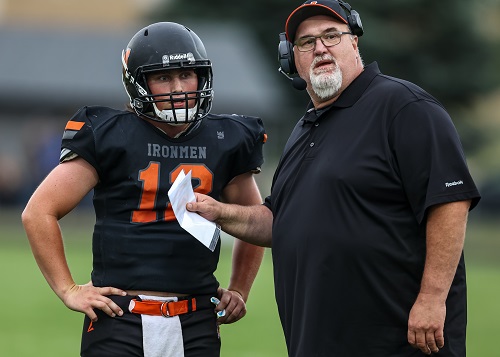 Winning and losing seasons, Derrer said the Ironmen always have given it their all.

“We’ve always taken the approach one game at a time, one practice at a time and try to get better every day,” he said. “Those years when you don’t win a lot takes a toll on the kids and the coaching staff.

“When the kids go out and play hard and they give you all they got, that is really all you can ask for,” he continued. “It’s definitely fun when you win — even those other teams – they gave you everything they had, and that’s all you can ask for.”

The Ironmen kept unbeaten this year with a 14-8 win in their last outing over Kalkaska. Jason Naumcheff connected with Oumar Sy on the game’s final play to earn the victory.

Seniors Justin and Adam Ackler and Mason Crandall have put together a handful off multi-touchdown games this year to lead the Ironmen. Naumcheff, a junior quarterback, is throwing regularly for touchdowns. The Ackler brothers, Naumcheff and Crandall also average around double-digit tackles per game to lead the stingy defense.

“We were pretty excited about what we had coming back, and these guys work hard,” Derrer said.  “So far, so good.”

The Ironmen also are coming off a bye week. The break was expected to help the team get through injuries and better prepare for the big game with Boyne.

“We’ve been banged up,” Derrer acknowledged. “We’re trying to get guys healthy so hopefully we can be at full strength going into the Boyne game.”

Improved line play has helped the Ironmen this fall, Derrer points out. It has followed the addition of assistant coach Ralph Munger. He’s been focused on the trenches. Munger’s arrival follows Taylor Borst stepping in as the defensive backs and strength and conditioning coach in 2018. 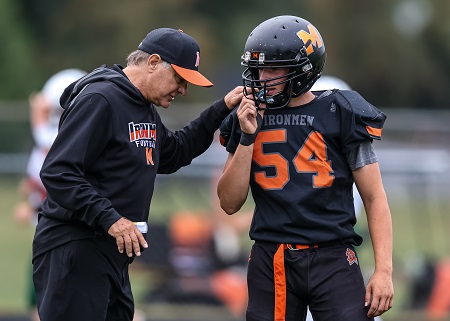 Borst and Derrer met Munger as the 2020 season started. They hit it off right away. Munger represents another one of the highs in Derrer’s coaching career.

“He’s a very knowledgeable guy, and he’s awesome to have around,” Derrer said. “He’s been a huge help to us.

The Mancelona coaching staff chose to end a practice early in August to go to Rockford. They all attended a rededication ceremony of the Rockford football stadium. The stadium’s name was officially changed in January from the Ted Carlson Memorial Stadium to the Carlson-Munger Stadium to honor two men whose contributions exemplify "Ram Pride."

Today Munger is grateful he’s had a chance to work the Mancelona student-athletes. They’re in the midst of playoff contention and a battle for a conference championship.

“Two of our last three (games) are at home, and they’re all going to be big games,” Derrer said. “All those games are going to be critical for conference and playoffs.

“We’ll have our hands full, but hopefully we’re up for the challenge.”