There won’t be any halftime ceremonies years from now celebrating the White Pigeon football team’s accomplishments in 2018. There’s no engraved award to display in the trophy case.

But the Chiefs’ 7-3 season certainly rejuvenated the program and its supporters.

That it will spark prolonged success remains to be seen, admitted second-year head coach Shawn Strawser, who isn’t interested in making bold predictions. What he can say with certainty is his players are committed, disciplined, physical and hungry for another taste.

Leading up to last fall, White Pigeon had just one winning season (5-4 in 2014) since its last playoff appearance in 2009, a year that resulted in a 9-2 mark with a Division 7 Pre-District win over Decatur. Last year, the schedule paired the Chiefs with what would turn out to be the top two teams in the Southwest 10 Conference during the first three weeks of the season. Losses to Centreville (22-12) and Cassopolis (28-12) sandwiched a 38-8 victory over Marcellus. But White Pigeon went on to win its final six regular-season games to qualify for the postseason, a march which included the program’s first win over Mendon in 20 years (although the Hornets got revenge in the Division 8 Pre-District round with an 8-6 win over White Pigeon).

It all happened quickly from Strawser’s perspective. When Joseph Morsaw resigned as the head coach at the end of 2017, administrators turned to Strawser and Mike Gropp — a duo with past varsity experience who had spent recent years guiding the middle school program. Strawser was just about to leave for a vacation in St. Lucia and needed to think about whether he wanted to deal with everything that comes with the top spot at the varsity level.

“We had a nice group of seniors. I had actually coached those kids when they were in Rocket. I knew them all real well.”

Strawser also knew he needed to do a little recruiting, starting with then-junior Stone Kemp, who turned his focus as a freshman and sophomore to leading a Bible study after school rather than playing football. 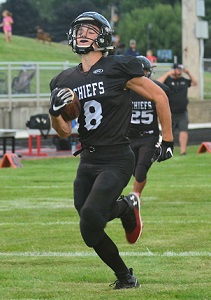 “He’s very persuasive, and so he got me back into it,” said Kemp, who finished with 398 rushing yards on 82 carries (4.9 per carry) and seven touchdowns as the Chiefs’ second back behind senior Carlos Castro in 2018. “I decided it would be a good place to be, and I think that’s where God wanted me.”

The benefits were twofold, Strawser said. It was obvious what Kemp brought to the team in terms of production, but Strawser noticed the positive impact Kemp had on his teammates as well.

“He’s a great athlete and an even better kid,” Strawser explained. “He is truly an all-around football player. Last year he played defensive end and outside linebacker. We stuck him out to cover one-on-one. This year we moved him back to safety. He has great hands and can pretty much do anything we ask him to do. He’s such a versatile player. He picked it up pretty fast for being out a couple years. He popped right back in like he didn’t miss a beat.”

To open the 2019 season, Kemp rushed for three touchdowns and returned the opening kickoff for a score in a 54-0 White Pigeon victory over Bloomingdale. He caught a touchdown pass in Week 2 in the Chiefs’ 14-8 win at Decatur, which required a goal-line stand during the final minute.

“It has been very enjoyable,” Strawser said of the program’s turnaround. “That was the whole point. On the bubble wasn’t good enough. We really wanted these kids to buy in, believe what we were doing and reap the rewards of their hard work. We preached every day mental toughness.

“Each time we had a successful game the confidence just grew. It has been a real fun ride. They were eager to do well. It paid off. We haven’t earned anything or proved anything this year yet, so we just have to keep grinding away.”

Though the Chiefs lost a ton of talent to graduation, people familiar with the program believed they could fill those voids. With 19 players on the roster, including three sophomores, the Chiefs have been able to do that, including a great effort from an offensive line that consists of a mix of experience and youth.

Captain and three-year starter Kobie DeBruine, a tackle who can play guard, sets the tone for a group that includes capable tight ends Dominick Pant – who has packed on 20 pounds of muscle since last season – and Chris Bontrager, guards Beau Freedline and Luke Gropp, and sophomore center Lane Esarey.

“That was the biggest question mark going into this season is that we were pretty young on the offensive line,” said Strawser, whose son, Lincoln Strawser, is back as a senior to guide the offense at quarterback. “They really got to work and made a lot of improvement from the scrimmage to Week 1.”

Now the Chiefs are after their first playoff victory since 2009 and fourth since 1990.

“We’re just looking for big things this year,” Kemp said. “This year I know it’s my last year to do it, so I just want to make the most out of every opportunity I get. I kind of like how people underrate us because it gives us a chance to show what we’ve got.”

PHOTOS: (Top) White Pigeon defenders track down a ball carrier during their Week 1 win over Bloomingdale. (Middle) Stone Kemp breaks away on a long run. (Photos by John Gentry.)