Monday was the first official practice of the 2020 high school football season across Michigan. Thousands of athletes put helmets on and started the journey, including Mensing’s Ottawa Lake Whiteford Bobcats.

Like any other year, Mensing said early-season practices are about finding out the personality of his team and what motivates them.

The start of practice this year is certainly unlike any other. While welcoming players, Mensing was busy going through MHSAA safety protocols, including asking a series of health questions and taking the temperature of every player and every assistant coach. With Covid-19 and the worldwide pandemic on everyone’s mind, the football season still started.

“I think the kids just want to be together,” Mensing said. “That’s the biggest thing. A lot of their travel teams that they played on this summer in other sports, those kids might be friends, but those aren’t their classmates. It’s different.”

While practice started Monday, there are still some questions about the upcoming season. For one, teams won’t be able to put on shoulder pads and equipment other than helmets until Aug. 17. In normal years, shoulder pads and then full pads are added gradually during the first week.

Week 1 games this season are scheduled for the final weekend of August, but the MHSAA has not announced yet if competition is cleared to resume. That announcement will be made by Aug. 20.

As a member of the MHSAA’s Representative Council, Mensing has been part of this summer's discussions about Fall sports moving ahead. He’s also part of the Michigan High School Football Coaches Association, serving as its awards chairperson.

He’s a firm believer in football happening this fall.

“It extends beyond football practice,” Mensing said. “It extends to the school experience, to school sports. We know from the last six months that socially and emotionally kids need this outlet. They need to connect. They need to be with one another and with people for their development.”

Mensing points to research that suggests two-thirds of youth today are depressed.

“That’s not acceptable in my world and I think a lot of others,” he said. “We can address that with outlets like arts and athletic programs.”

Playing high school sports, he said, can help teach student-athletes to be safe, to wash their hands, to wear masks during a pandemic and to social distance – in other words, to take the necessary steps to stop the spread of the virus. 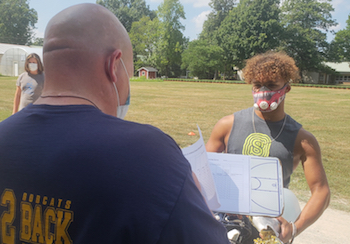 “It’s been very, very apparent to me that our young people, out of their need to socialize and engage with one another, are going to,” he said. “What’s concerning me when it comes to the virus and the transmission of it, is that it’s our job to mitigate that and reduce it so it doesn’t get spread. When there isn’t structure and protocols in place and there isn’t an education about why those structures are necessary, the spread is only going to get worse.

“Through sports and our arts programs, we can establish safe routines to educate people on why we need these protocols and why we need to mitigate and slow the spread of the disease.”

Coaches have a unique opportunity to instill the message into their team members.

“It’s a challenge every day because it’s not what they are doing outside of this,” he said. “It’s definitely a challenge. It’s not natural for people to stay six feet apart or wear a facial mask.”

The Tecumseh native played college football at Adrian College, coached for one year at both Adrian College and Siena Heights University and has been a head coach at Addison, Grayling, Owosso, Tecumseh and is starting his ninth year at Whiteford. His Bobcats won the 2017 Division 8 championship after finishing runners-up the season before.

Among changes to this preseason is the elimination of the scrimmage at the end of the second week of practice. Mensing was fine with that move, he said, because it gives the coaching staff a little more teaching time.

“From an instructional standpoint, I think we can have a little more patience,” he said. “We’re not in such a hurry. Our pace can be a little more reserved. We are three weeks out from playing anyone.”

The Bobcats will be young this season after finishing 5-5 a year ago and making the playoffs for the eighth straight season. They do return three of their top four rushers from last season in senior Devon Shaw (883 yards) and juniors Cole Giesige (668 yards) and Levi Hillard (132 yards). Other returning starters include sophomore quarterback Shea Ruddy, tight end Luke Masserant and all-state offensive lineman Noah Bauman.

“We have a long way to go,” Mensing said.

Returning starters and numbers aside, Mensing is optimistic the season will go forward.

“As long as it’s driven by the science and it’s based around us making sure we are following protocols, yes,” he said. “Ultimately if teams aren’t having transmission of the virus, we will have a safer society. Can it happen? Sure.”

PHOTOS: (Top) Ottawa Lake Whiteford football coach Jason Mensing, right, takes the temperature of Cole Giesige prior to the start of Monday’s first practice of the 2020 season. (Middle) Mensing fills in a questionnaire with Devon Shaw. (Photos by Doug Donnelly.)