DETROIT – Next time, no one will leave Ottawa Lake Whiteford out of the conversation.

It wasn’t like the Bobcats felt overlooked. But coming into this season’s Division 8 playoffs, it was pretty easy to pencil in four-time reigning champion Muskegon Catholic Central to win again.

Then, when the Crusaders lost to 12-time champion Mendon in the Regional Finals, the Hornets assumed the status as favorites – while on the other side of the bracket, reigning runner-up Whiteford continued building a run historic both locally and statewide.

“Everybody kinda knew Muskegon (CC) was the favorite going in, and Mendon beating them, that was a big win,” Bobcats senior lineman Lucas Tesznar said. “But we knew what we had. We knew we were talented. We just had to play our game every game, and good things would happen.”

And they experienced the best Friday – the first MHSAA football championship in school history, with a 42-21 win over previously-undefeated Saginaw Nouvel to kick off the weekend at Ford Field.

Last year’s trip to the Division 8 Final was Whiteford’s first appearance in an MHSAA title game in this sport.

The Bobcats lost to MCC 35-6, but a year later left the field having scored 737 points this fall – tied for second most in one season with Beal City’s 2013 team – to average 52.6 per game, tied with the Aggies for ninth-most all-time.

“Four years ago if you would’ve told me we were going to be in back-to-back states, and win it my senior year, I wouldn’t have believed you,” Tesznar said. “It wasn’t just us. It was the whole community. Everybody around us just pushed us to get better, and the support was non-stop. It was just amazing.” 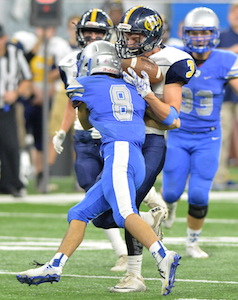 Two plays later, Eitniear ran 37 yards to put his team on the board. By the end of the first quarter, junior Logan Murphy had added two running scores to push the Bobcats’ advantage to 20-0. Eitniear ran for another four minutes into the second quarter to make the score 28-0 and give Whiteford all of the offense it would need for the day.

The Bobcats gained 484 yards, with Eitniear running 10 times for 129 and three touchdowns and throwing for 143 on 7 of 11 passing. Murphy had 126 yards rushing and three scores as well.

They succeeded behind an all-senior line anchored by the 6-foot-5, 285-pound Tesznar. He was joined up front by Jordan Book, Jacob Lewis, Alex Kohler, Jarret Atherton and tight end Matthew Taylor.

“We work every day in practice, just to get better each and every day. But I’m not surprised … our o-line has worked as hard as they can all year,” Eitniear said. “That whole offense is all based on them. All of that is all them.”

Nouvel had a tougher time stopping the Bobcats’ attacking defense, which had 11 tackles for losses including four sacks by junior Ian Slick and two by Taylor. Whiteford didn’t allow more than 22 points in a game this season, an impressive feat that got lost a little behind all of the accomplishments on offense.

Senior Tate Hausbeck threw for 175 yards and two touchdowns on 11 of 26 passing for Nouvel (13-1), with senior Ken Kujawa catching both scoring tosses. Junior Joshua Kuligowski added a score on the ground. Senior Alex Wrobel led Nouvel with 14 tackles, and Kujawa had 10.

“All the looks we had out there were pretty much what we planned for. When you’re playing against a good football team, you’ve got to make some plays, try to find a way to make plays,” Nouvel coach Mike Boyd said. “I thought at times we moved the ball extremely well. I think probably when we reflect on things, we’ll see some opportunities that got away from us. They got a lot of pressure on Tate, and if we had more from a protection standpoint we might have had some big plays out there.”

Whiteford coach Jason Mensing talked after of the support his program has received from various groups in the community since he and his staff took over six years ago – and how all of it has made a difference as the Bobcats have continued to rise.

On their way back to Detroit, they found what they needed to climb one step more and finish as the last Division 8 team standing.

“The chemistry this year was just so amazing. Everybody got along with each other, and it was just a family. I think that’s what put us over the top,” Tesznar said. “We put Whiteford on the map, and it’s amazing. I think we all wanted a little revenge on Muskegon, but this feels just as good winning the state title.”

PHOTOS: (Top) Whiteford's Logan Murphy rumbles into the end zone for one of his two touchdowns Friday. (Middle) Bradyn Clark-Gilmore holds on to a catch as Nouvel's Ken Kujawa wraps him up.