Jason Mensing insists that when he showed up at Ottawa Lake Whiteford a decade ago he had thoughts of a state championship on his mind.

It seemed a tall task. The Bobcats had enjoyed pockets of success throughout school history but had just won just five playoff games and one conference football championship over the previous 45 years.

“We believed if we could imprint our system and develop a strength program and teach the fundamentals and continue to grow, we’d have success,” Mensing said.

“The reality is we do believe in our system,” Mensing said.

After 10 years, Mensing announced this week that he would be taking his system elsewhere. He will become the next head football coach at Westland John Glenn, a Class A school west of Detroit. The Rockets haven’t had much success in recent years, but school officials are excited to have Mensing on board.

“I’m excited to see what Jason can bring to our school and our program,” said John Glenn Principal Eric McCalla. “He is a culture builder. That’s one of the things we need here.”

“It was definitely a great hire for us,” McCalla said. “We needed a different direction, and we feel confident that he is the right person for the job.”

Mensing, who will step down as athletic director and director of student advancement at Whiteford at the end of the school year, planned on meeting the John Glenn football players and parents this week. He will start immediately to build a coaching staff and relationships.

“They’ve struggled the last couple of years, but there is a solid history there,” Mensing said. “The first thing is I want is to bring stability and consistency to the program. They’ve had three football coaches in four years. We have to create an atmosphere where playing football is fun, create a culture where kids are excited about being part of the program.”

John Glenn has known football success. During the 1990s, John Glenn made several deep runs in the playoffs, reaching the Finals in 1993 and the Semifinals two more times.

The Rockets open the season Aug. 25 against Hartland in a nonleague game and play a challenging schedule in the always-tough Kensington Lakes Activities Association. They finished 2-7 last season and are seeking their first winning finish since 2014. 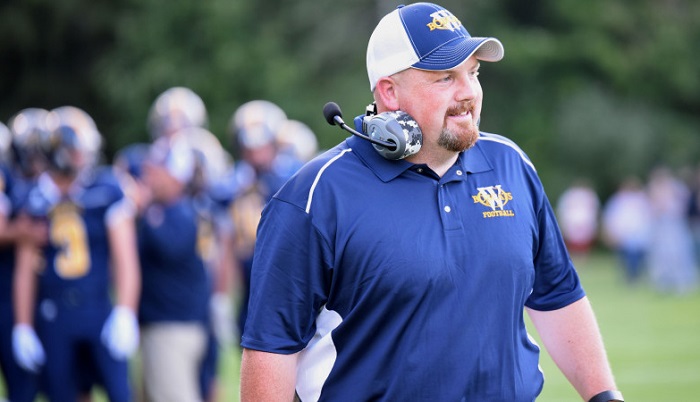 “There’s no doubt that we play a tough schedule,” McCalla said. “In any given year we play one if not two or even three teams ranked in the top five or top 10. It’s a tough football conference.

Mensing was an academic All-American at Adrian College, where his father Henry Mensing coached and served as athletic director. Jason Mensing has made four other coaching stops during his 19-year career and picked up a lot of playoff appearances and coach of the year awards, and a built a lot of relationships.

He led Addison to the playoffs in his first season as varsity coach. He spent one year at Grayling, and won an Associated Press Class B Coach of the Year award during his three years at Owosso. He returned to Lenawee County to coach Tecumseh during the mid-2000s. In his one year away from high school football, he coached at Siena Heights University.

Whiteford lured him from the college level in 2012.

It wasn’t long before the milestone games and victories began piling up. Ironically, two Bobcats playoff losses were important steps in the team’s ascension. The first was a 2013 loss to New Lothrop in the Division 8 Regional Final. The Bobcats had beaten Sterling Heights Parkway Christian 59-6 and Detroit Allen Academy 61-20 in two home District games, then went on the road to face the Hornets, a powerhouse program.

“That loss was really big,” he said. “It showed us how far away we were but showed us what we needed to do to get there.”

Whiteford won seven games the following year, and in 2015 the Bobcats won three playoff games for the first time in school history, including a victory over a strong Climax-Scotts team. They lost the following week to Waterford Our Lady of the Lakes, but again, Mensing said, it was a loss that showed them the way.

“It was the moment we knew we belonged,” he said.

The Bobcats have ‘belonged’ ever since, proving not to be a one-and-done type program.

The 2017 team scored an incredible 737 points and punted just twice all season. The closest any opponent came was 16 points. Whiteford defeated Mendon in the Semifinals and Saginaw Nouvel in the Division 8 championship game.

Even in 2019 when the Bobcats went just 5-5, they upset a powerful Sand Creek team. Last year Whiteford reached the Division 8 Semifinals and led Hudson 22-0 at halftime before losing to the eventual champion, 28-22.

“There were some ups and downs,” Mensing said. “There were times we implemented things that didn’t necessarily work. Overall, though, we kept growing.

“When I look back at those years, the focus we started on growth and getting better year after year worked. We had 10 years of consistent growth. I do feel we are significantly more mature and better of a program than we were when I got here in 2012.”

Now, Mensing turns his attention to John Glenn, a school six times the size of Whiteford. He believes in the system he’s bringing with him and in the students at John Glenn.

“He’s a kid guy,” McCalla said. “We need people who are going to be there for our kids, not just football players, but all of our students. It’s not just about football, but life lessons.”

PHOTOS (Top) Coach Jason Mensing confers with a Whiteford player during one of the team’s two runs to Ford Field. (Middle) Mensing will be leaving the program after 10 seasons with the Bobcats. (Top photo by Tom Hawley/Monroe News; middle by Cari Hayes.)