Muskegon High School’s historic Hackley Stadium was not an easy place for Gene Young to navigate in recent years, with his hulking 6-foot-6 frame slowed by neuropathy in both feet and worsened this past fall by a nasty infection on his left heel.

But few people have ever been more positive than Young, a giant – literally and figuratively – in the Muskegon area sports, broadcasting and education communities who died on Jan. 2 at the age of 76.

Young was determined to make it up to the Hackley Stadium press box back on that August day last fall, to broadcast the Big Reds’ opening game against Ann Arbor Pioneer with myself and play-by-play man Larry Taylor on Muskegon radio station WMUS-FM 107.9 – kicking off his 39th year as the voice of high school football on the lakeshore.

The first challenge was parking.

“Tommy, pull into that lot across from the gate. I know the people working there,” said Young, who seemingly knew everybody, everywhere.

Gene rolled down his window and I couldn’t hear his exact words, but I know he gave $10 instead of the $5 charge (the proceeds were going to help out Muskegon’s minor sports programs). He also put a smile on that parking lot attendant’s face and made him feel like the most important part of the entire game-day operation.

The next hurdle was crossing Sanford Street and getting into the stadium.

Back in his heyday, Gene was a fantastic athlete, a standout big man and 1959 graduate of Muskegon Heights High School, who accepted a basketball scholarship to Central Michigan University and played on the varsity basketball team as a freshman. He transferred to Otero Junior College in Colorado for one year, before playing his final two years for Weber State University in Utah, coached by NBA legend Dick Motta.

But this past fall, crossing the street was getting to be a challenge. 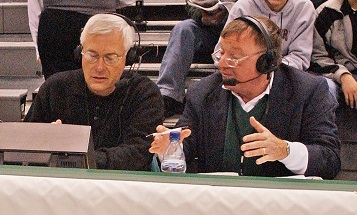 The gate attendant spotted him making his way slowly across Sanford with his cane and began undoing the padlocked gate. Young never needed to show a press credential in the Muskegon area, as he and his buddy Jim Moyes had been the voice and the spirit of Muskegon-area high school sports since they first started working together in 1978. The two filled their broadcasts with memories and insights brought in from their deep knowledge of Muskegon’s sports history.

As Gene and I were let in, many of the fans who still had to wait snickered a bit. Gene diffused the situation quickly, as only he could.

The next part of the journey is walking down the dark tunnel and up a short ramp where you then experience that first glimpse of the hallowed ground at Hackley Stadium – it’s a moment that Muskegon locals would equate with going around “the curve” near Pere Marquette Park and seeing that first view of Lake Michigan, or an 8-year-old’s first visit to Disneyland. As he plopped down on the handicap bench up front to rest, no one knew it would be his final time to experience that thrill.

Shame on me for not appreciating that moment as I should have, because I was nervously scurrying up the bleachers to set up our radio equipment.

When I glanced down, Gene was holding court on that bench as a steady stream of folks stopped by to shake his hand.

Some of them were old education friends like Roger Hoekenga, a retired Muskegon Public Schools administrator who stopped to talk about retirement. Gene began his teaching and coaching careers at Muskegon Reeths-Puffer, but is best known for his 26-year run as the Director of Community Education, Adult Education and Recreation at Fruitport. Upon his retirement, he specialized in helping school boards make good hires for superintendent and other administrative positions.

Terri Clock, the lone woman on the Muskegon Area Sports Hall of Fame board, then stopped to visit for a few moments. One of Gene’s crowning achievements had been his tireless work for the local sports hall, taking over as president in 1994 and serving in that role until his death.

“He is the hall of fame. When Dick Hedges (the first president of the MASHF) passed away, Gene took over and that was his baby,” said Moyes, who delivered a powerful eulogy at Young’s funeral service on Jan. 6. “He put hours and hours into making our hall of fame the best one. Everything was always first class with Gene.”

The equipment was all set up, and I had already done a test call with the station – and my partner was still sitting on that bench.

I just shook my head and smiled. His friends and family (and especially his wife, Sandy) were used to “Gene speed” – whether it was making his way past all of the characters at the bar to get to our table for lunch every Friday, or visiting with each of the workers on his way to the pool at the health club, or shaking everyone’s hand after church on Sunday. 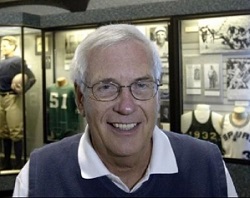 Muskegon head coach Shane Fairfield also stopped quickly to chat, thanking Gene for sending him a note of encouragement all four times his teams lost in MHSAA championship games (Fairfield told me at Gene’s visitation that he received another note this year after the Big Reds won the Division 3 title). Then, finally, Gene had a brief word with Muskegon star quarterback La’Darius Jefferson, who experienced Gene’s handshake grip, which he kept locked on until he was ready to let you go.

Only then did he start his trek up the 28 concrete rows to the Hackley Stadium press box, which included two or three more stops to rest/visit with Muskegon and Ann Arbor Pioneer fans, before he finally got to his spot at 6:25 p.m. – 5 minutes before air time.

“Tommy Kendra, I picked up some good information down there,” he said.

Those words struck me that day, and I learned a valuable lesson. As I sat there alone in the middle of the press box, sweating profusely, bored and isolated, poring over relatively meaningless stats that I already knew by heart, I realized that he was doing it the right way.

I’ve determined that the best way to honor and remember my dear friend and mentor is to never be in too big of a rush to get into the press box, to get a seat at the lunch table or a treadmill at the gym. Take it a little slower. Be interested in other people. Figure out a way to use your God-given gifts to help them. Brighten their day. And, in the process, learn a few things and gain a new perspective.

Rod Beckman never really got away from high school sports.

Beckman, who died on Dec. 20 at the age of 69 after a five-year battle with cancer, is remembered as one of the best all-around athletes to ever come out of Shelby High School – good enough to earn a Division I basketball scholarship to Oklahoma State University and later shift gears and play three years of professional baseball in the Detroit Tigers organization.

Then Beckman went back to high school, in a way, as the voice of Ludington High School sports for 40 years, from 1972 to 2012, at radio station WKLA in Ludington, where he worked as a popular disc jockey by day.

Beckman also made an impact on high school sports as a well-known and respected baseball and softball umpire in Mason County for more than 25 years.

Ultimately, Beckman stayed involved in sports throughout his life as an outlet for his competitive nature and a way to spend quality time with family and friends. His passion for basketball and baseball later gave way to fast-pitch softball and golf, but he also did his share of bowling, hockey and racquetball. Beckman is a member of the Mason County Sports Hall of Fame.

Beckman used his popularity and name recognition to help others right up until his death.

Beckman is survived by his wife of 21 years, Traci.

PHOTOS: (Top) Gene Young, left, with his most recent broadcasting team of Larry Taylor (second from left) and Tom Kendra, and halftime guest Justin Abdelkader of the Detroit Red Wings, during a 2016 game. Young was working for iHeart Media station WMUS-107.9 FM in Muskegon. (Middle) The legendary broadcast duo of Young, left, and Jim Moyes, call the Class D championship game in 2002. (Below) Young poses in front of the Muskegon Area Sports Hall of Fame displays at the L.C. Walker Arena in downtown Muskegon. Young served as president of the MASHF for the past 24 years.