DETROIT — Danny Bauder would rather trade touches for trophies.

In most other offenses, a player of Bauder's ability would be a featured running back. What team wouldn't want to keep feeding the rock to a kid who ran for 1,796 yards and 28 touchdowns this season?

Bauder did all of that damage, despite the fact he shares the load in the shell game that is Zeeland West's run-oriented Wing-T offense.

He once again had maximum impact on minimal carries, running eight times for 144 yards and a touchdown in West's 34-27 victory over DeWitt in the MHSAA Division 3 championship game Saturday at Ford Field.

Two teammates had more carries than Bauder, as the Dux rolled up 441 rushing yards on 66 carries. Cole Hession had 26 carries for 122 yards, quarterback Casey Brinks had 11 carries for 66 yards and Grant Postma had six carries for 71 yards and two touchdowns.

They all shared in the same accomplishment with their teammates — West's third MHSAA title in the nine-year history of the school. The Dux (13-1) were Division 4 champions in 2006 and 2011.

"I love (our offense), because everyone has a chance to get the ball," said Bauder, who got things rolling with an 80-yard touchdown run on the second play from scrimmage. "We have three backs. We rotate them like every other drive. It's a good team offense. It's a team. I don't mind, just as long as we win." 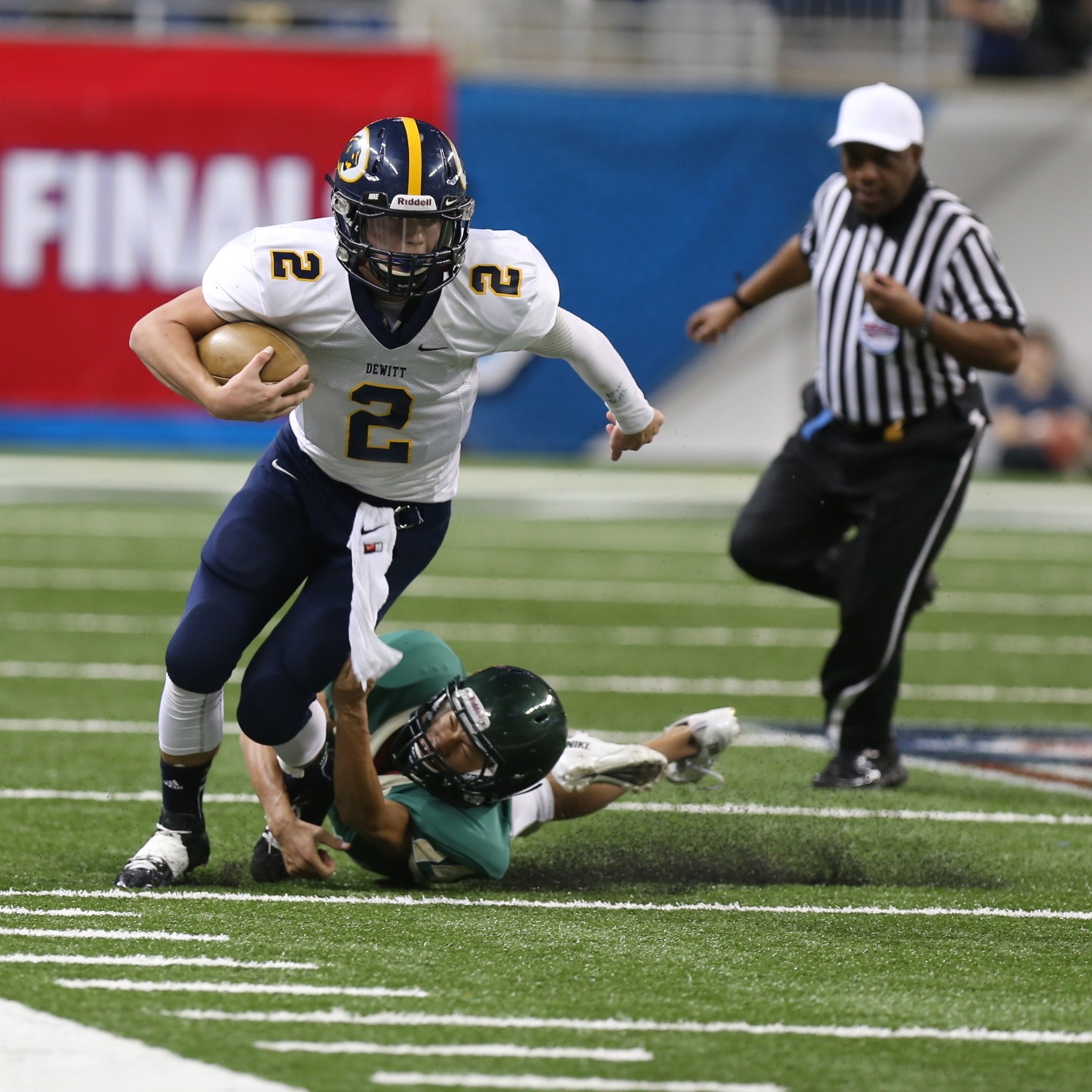 Led by its ground attack, West appeared to be on the verge of running away with this one, building a 28-7 halftime lead.

The Panthers wouldn't allow the Dux to coast to the championship that easily, however.

A 56-yard touchdown run by Chris Ruby and a 29-yard scoring strike from Jake Johnson to Josh Borta in a 72-second span got DeWitt within 28-20 with 6:50 left in the third quarter.

West responded with a 25-yard touchdown run by Brinks with 2:57 to go in the third, but an offense that averaged 48.9 points per game coming into the contest wouldn't score again. Junior defensive back Ben Zamiara led DeWitt's defensive charge with a game-high 20 tackles, 11 more than anyone else on either team. The Panthers held West to 1-for-4 on fourth-down conversions.

"I'm pretty sore right now," Hession said. "This is one of the games I've come out of the most sore. I can feel it right now, and my adrenaline is still rushing. Props to them, because they came out and they had three or four series where they stopped us on fourth down. Not many teams can do that. They're just good."

DeWitt closed the deficit to seven points when Johnson rolled left and hit a wide-open Borta for a 75-yard touchdown with 4:25 left in the game.

The Panthers' offense would watch the rest of the game on the sidelines. The Dux milked some clock by getting two first downs before dropping back to punt from its own 48 for the only time in the game. Postma barely got off the punt, but was knocked to the ground when a DeWitt defender caught him on the leg while going for a block. West retained the ball, running out the remaining 32 seconds by taking a knee one time.

"Our punter was already hurt," West coach John Shillito said. "He was on one leg. So, it was a great effort by Grant to get the ball off and it was a break for us. We knew the game was over. You knew that all you had to do was take a knee."

DeWitt coach Rob Zimmerman said going for the block was a risk the Panthers had to take, given the time on the clock and the potential field position.

"If they punt and pin us down at the 10, that's a long way to go," Zimmerman said. "We went for it. Obviously, it didn't turn out in our favor. You have to take chances when you're in that situation."

DeWitt tried in vain to play catch-up all night after falling behind 8-0 when Bauder took the ball around the left side of the Dux line and broke into the clear for an 80-yard touchdown just 45 seconds into the game. West, which attempted (and missed) only one extra-point kick all year, got two points on a pass from Brinks to Zach Poppema.

West scored on four of its five possessions in the first half, failing only on its second series when a fourth-and-five run from the DeWitt 13 came up a yard short.

The Dux shook off that temporary setback and scored on a 7-yard pass from Brinks to Hession on the first play of the second quarter. Hession ran for the 2-point conversion to make it 16-0.

Following a fumble at the West 49, the Dux took a 22-0 lead on an 18-yard run up the middle by Postma with 6:45 left in the first half. Brinks' conversion run failed.

DeWitt (13-1) finally put a drive together and got back in the game on a 4-yard touchdown pass from Johnson to Justice Shankel with 3:15 left in the first half. Cameron West's extra point made it a 22-7 game.

The Dux didn't get away from their ground game with time winding down in the first half, throwing only one pass on a seven-play, 80-yard drive that yielded a 12-yard touchdown run by Postma with 1:04 to go in the half. Postma's 2-point run failed, resulting in a 28-7 halftime lead for West.

"We dug ourselves too deep a hole," Zimmerman said. "I felt if we got one more possession, we had a shot."

Johnson, a junior, was 15 for 24 passing for 289 yards, three touchdowns and two interceptions for DeWitt. Brinks was 3 for 5 for 35 yards and a touchdown for West.