EAST LANSING – Averi Gamble had a smile on her face for all but a few seconds of the final minute of Thursday night’s MHSAA Semifinal.

Mount Pleasant Sacred Heart’s Class D championship win two years ago was “the best moment of my life, thus far,” she said after.

And she and her teammates earned the opportunity to go through it all again.

Sacred Heart chipped away over three quarters to finish a 45-38 win over Stephenson and set up championship game matchup against top-ranked Pittsford.

“Just the fact that I can come back here twice is overwhelming,” Gamble added. “I know how it feels already. It’s just so exciting that I can do it twice.”

The No. 3 Irish (24-1) will face Pittsford at 10 a.m. Saturday. Stephenson, ranked No. 8 entering the postseason, was playing in its first Semifinal and finished 24-3.

But for more than a half, it looked instead like the Eagles’ dream season might go on.

Stephenson took a five-point lead into the final seconds of the first quarter, and led as late as two minutes into the third.

But that’s when Sacred Heart’s experience began to pay off.

The Irish actually are relatively young, with a freshman and two sophomores in the starting lineup. But Gamble was The Associated Press’ Class D Player of the Year this winter and senior guard Megan English also started in the 2014 Final.

Gamble finished with 13 points, 13 rebounds and four blocked shots, but had 11 points, five rebounds and two of those blocks over the final 14 minutes and nine of her team’s 12 points during the fourth quarter.

Stephenson, which had shot 33 percent from the floor during the first half, sagged to 23 percent during the second half against the Oilers’ zone, which was anchored by Gamble dissuading would-be drivers from taking a run at the basket.

English added two points, two steals and an assist over the final 14 minutes. 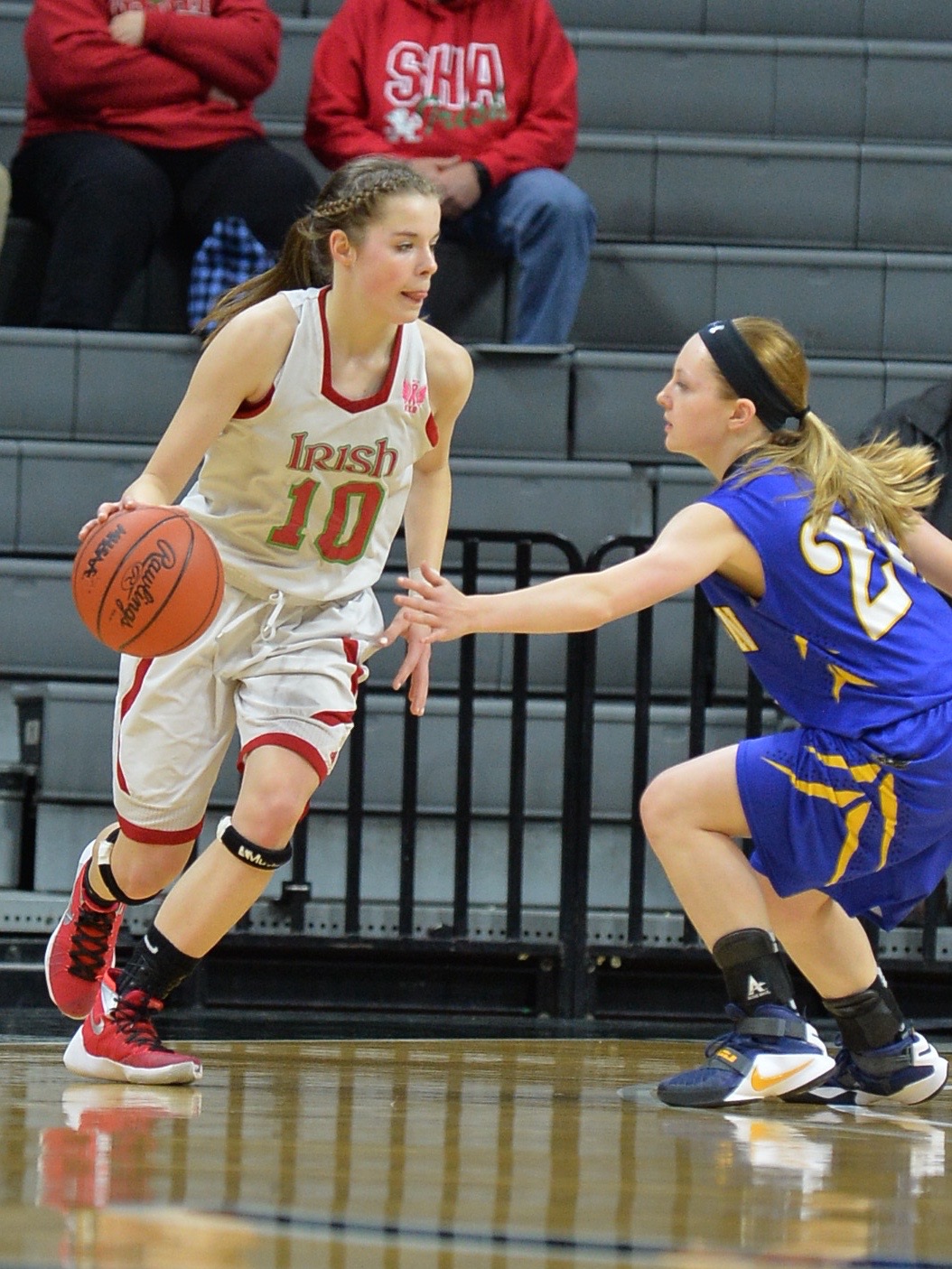 The Irish did switch things up defensively a bit during the second half in an effort to apply more pressure and up the pace of the game. Stephenson coach Shanna Beal admitted that uptick in tempo might have drained her team’s energy a bit too quickly – although the inability to get many open looks and stop Gamble down the stretch certainly made differences as well.

“Obviously she’s the focus and what they base their offense around, and we just decided to play in front and behind her,” Beal said. “The problem that arose was getting body position, and rebounding was a big key in the second half. We just couldn’t move her out of there to get second shots.”

Senior Karley Johnson was the lead scorer for Stephenson with 12 points, and senior center Tori Wangerin had six and 13 rebounds while locking up Gamble for more than a half defensively.

“I have no words; I’m super proud of the girls this year,” Beal said. “These three girls (Wangerin, Johnson and Kelsey Johnson) have grown up in the gym. This was a dream of theirs, and I’m glad we were able to make it here. I believe we fought hard all the way to the end. We have a lot of pride being the first women’s team from our school to make it here. Most of our community was here; we’re pretty small, but that they were all here was great support.”