HARTLAND — When asked how many seasons he’s coached basketball, Don Palmer always is up front.

The reactions are variations of shock and awe.

“How many seasons? 104?” a reporter asked after his most recent victory March 8.

“Seventy?” said the reporter, not suspecting a number that high.

Told the same number, Hartland senior Graysen Cockerham could only giggle in disbelief.

Seventy is quite a number at first blush, considering Palmer is only 67 years old.

But he coached boys and girls at Milford for 29 years and has been a head coach for 41 overall, the last nine at Hartland.

He has won 935 games, 588 with the girls, which has enabled him to become the winningest overall basketball coach in state history. The old record, 922, is believed to have been held by Ed Mehlberg of Auburn Hills Oakland Christian. As it turns out, both Palmer and Mehlberg were inducted into the Michigan High School Coaches Association Hall of Fame last September.

Palmer has coached countless players and their children as well as against coaches and their sons. On this year’s team he coached Sollom, whose mother, Dianne Hall, played against Milford while at Walled Lake Western; and Kamryn Gerecke, whose mother, Lori Montante, is Milford’s second-leading scorer all-time.

He’s won with and without talent on offense. And on defense, opposing coaches have learned to prepare in advance.

“I learned to do some prep work for those games,” former Brighton coach Jason Piepho said. “We would mix in different defenses in practice throughout the year. You couldn’t prepare for him for just two games a year, because you didn’t know what he would throw at you.”

Piepho learned that first-hand while playing for Howell a quarter-century ago.

“I remember the first time I played against him,” he said, laughing. “I was Howell’s point guard, and they threw a box-and-one against me. It was frustrating. It was the first time I’d seen that defense.”

Coach to the core

His Hartland girls finished 20-6 this winter, advancing to last week’s Class A Quarterfinals before falling to Wayne Memorial.

Palmer started coaching at Milford in 1974, the year he graduated from Michigan State University.

For the next 29 years, until girls basketball moved to the winter beginning with the 2007-08 season, Palmer coached both sports. 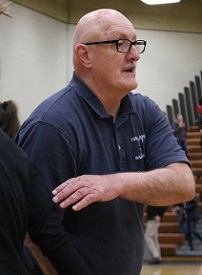 “It became a lifestyle,” he said. “We had girls in the fall and boys in the winter. We would do our boys (offseason) stuff in June and the girls stuff in July, and it just kept going.

“When they switched the seasons, I had to make a choice,” he said. “I chose girls because that’s where I started. It gave me a chance to be a coach at a young age. So that’s where my allegiance was. As I grow older, I could never do two seasons back-to-back.”

Palmer’s Milford teams of both genders were known for defense and an offense that could be described as patient or painfully slow, depending on one’s perspective.

“When we started out with the boys, it was a program that struggled mightily,” he recalled. “We would do whatever we had to do to stay in games, whether that be ball control or setting the tempo.”

“I think the biggest thing that Don has done is that he adapts how he plays the game to his talent,” said Lee Piepho, who coached girls basketball at Howell. “Sometimes you don’t like what he does in terms of his strategy, but his idea is, ‘I’m going to play whatever strategy on the court to help my team win the game. If that’s standing out there and holding the ball, putting my arm under it and go into the quarter tied at zero or leading 2-0, I’m going to do that.’”

Last season, Palmer adjusted to a team than loved to run up and down the floor and was good at it.

“I don’t mind the running game,” he said. “You weren’t holding (that team) back. You were doing a disservice if you did.”

Both Piepho and Palmer are fiery competitors, but Palmer once made Piepho laugh during a game.

“One night we were playing Milford with Sara (Piepho’s daughter, a point guard at Howell),” Lee recalled. “I got a little upset with Sara and I pulled her out of the game and was talking to her and Don hollered over, ‘If you don’t want her, I’ll take her.’

“We had her graduation party and invited Don over, and he brings Sara a pair of Milford practice shorts.”

Palmer, at 6-foot with a shaved head and glasses, is an intimidating presence on the sideline during games. HIs players soon learn to look beyond that persona.

“I think most people, from a distance, see him and think he’s crazy,” Cockerham said. “But as players, we know he cares and wants us to be the best we can be. We appreciate it, because we need a coach to push us, and that’s exactly what he does. He expects nothing but the best for us, and that’s the way he gets it out of us.”

Mike McKay coached under Palmer at Milford for many years. He now is the varsity coach at Grand Blanc.

“He can be intense,” he said. “But off the court he does things he doesn’t want recognition for but does them for the betterment of his players. He takes care of the whole program.”

New challenge, no let up

After 32 seasons coaching at the only place he’d ever worked, Palmer’s contract was not renewed at Milford after the 2008-09 season.

He wasn’t out of coaching for long.

“When I left Milford, the Hartland coach, Brian Ives, had to leave because of work obligations,” Palmer said.

After years of struggling, the Hartland program was on the rise.

“We could beat them at the varsity level, but just barely,” Palmer said of coaching against the Eagles near the end of his Milford tenure. “The lower levels were just getting murdered. So we could see it coming.

“I told my coaches, ‘There’s going to be no excuse for not winning. None,’” Palmer recalled.

“There just doesn’t seem to be any let up for a while,” he said, referring to the talent stream at Hartland. Indeed, five sophomores and two freshmen saw extensive time during the postseason for the Eagles this year.

But, he jokes, some old habits die hard.

“Even now, frequently, I’ll still write ‘Milford’ in a scorebook or something like that,” Palmer said. “I’m much, much better now. I’m a Hartland guy and a Livingston County guy, but it took a while. I coached 61 seasons over there. That’ll always be my school, but I do think that getting hired at Hartland was the best thing that happened to me under those circumstances. It’s been fabulous.”

Palmer’s coaching tree is expansive, and his list of admirers much more so.

“When we were winning and making runs in the state tournament, he went to all of our games,” Jason Piepho said. “He was always a coach you could call and talk to about things in your program. He’s an open book, willing to help and mentor. He’s what you want in a high school coach.”

“There are a lot of challenges that come with coaching,” McKay said. “A lot of people don’t like hearing the truth, and it’s hard to tell them. But he’s always honest and up front with his players and staff. He’s a first-class person and coach, and I admire him and try to emulate what he does.”

McKay just finished his second season with the Bobcats, and they beat Hartland in December in a key victory. 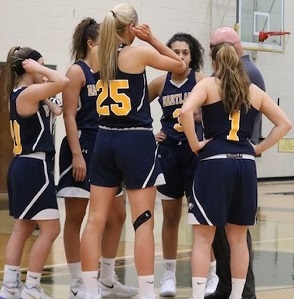 “I didn’t like losing, but losing to him took the sting away a little bit because he was so happy and it was a big win for his program,” Palmer said. “So that helped. I’m proud of him, and he’s turning it around and he’ll be fine.”

Told this, McKay replied, “That tells you all you need to know about Don. He’s a class act. It was a great win for our program, but bittersweet for me. I look on him as a second father, and you always want to please your father. I know how badly he wanted to win and compete and how much I do, too.”

“He was so mad at me,” Olszewski said, laughing. “He and his players were all red-faced, for different reasons.

“He’s a great coach and I love listening to him talk and pick his brain for things. He’s very well deserving of the record. Hopefully he’ll be around a lot longer.”

A lot has changed since Palmer’s first season as a varsity coach with the Milford girls back in 1977.

“As we kind of march on in time, you’ve got people playing 60 games in the summer,” Palmer said. “I think if we get in 30 games, that’s plenty. I do think this: More than ever, you’ve got to let kids be kids a little bit. We’re going to that specialization stuff, and I don’t think that’s great.

“People love to go to the next level, but it becomes a job,” he continued. “So this is the time to be a kid. This is the time to enjoy sports. Basketball is always my love, but I enjoyed football. I enjoyed track, and I think kids, well, it’s just how it is. There are outside forces. Everyone says they have a college athlete, and the percentages say they don’t.”

Specialization, he adds, not only cuts into individual opportunities to learn, but also hurts teams that could use those athletes.

“Unless you have a gigantic high school, all of your athletes have got to play a couple of sports, or you don’t survive,” he said.

As he gets older, Palmer sees the end of his career approaching, although he’s not there yet.

“I just go year-by-year,” he said. “Part of the compromise my wife and I made for me to continue (coaching) is that we’re going to travel a little bit more. She likes that, and so we’ve got some plans. After the season is over, we’re going to take a trip to Dallas. I’m a Kennedy assassination buff, and she just wants to see Dallas.”

Asked if he will be back next year, he nods his head.

“Right now, that’s the feeling, I guess,” he said. “If everything works out, I would like to at least finish with Whitney. That’s a gift, to coach a kid like that. But eventually you have to make a decision. Right now, my energy is up, but when the season is over, I go into a meltdown for a month where I don’t do much. Just don’t have the energy. It takes more and more out of you every day.

PHOTOS: (Top) Hartland girls basketball coach Don Palmer stands for the national anthem before a game at Howell last month. (Middle) Palmer, also during the game against the Highlanders. (Below) Palmer talks with his team during a timeout. (Photos by Tim Robinson.)