GRAND RAPIDS – Ypsilanti Arbor Prep calls its championship pursuit a “4-mile run.” And the Gators got through about 3.9 a year ago.

They’ll get another chance to finish the final leg after a 53-35 Class C Semifinal win over Maple City Glen Lake on Thursday at Van Noord Arena.

The Gators, who won Class C in 2016 and then finished Class B runner-up a year ago, will face reigning Class C title winner Detroit Edison in Saturday’s 4 p.m. championship game.

Arbor Prep was the only team this season that defeated Edison, downing the Pioneers 54-49 on Jan. 11.

“Considering what happened with us last year, and the type of players we are and the type of team we have this year, we’re anxious that way,” Arbor Prep senior Jala Petree said. “We’re ambitious to get what we deserve. And I think we’re going to keep working. It isn’t over yet.”

Junior Mahri Petree – Jala and senior Lasha’s younger sister – said after she can feel “a different type of energy in our locker room and practices.”

Arbor Prep (21-5) came out with that drive, opening the Semifinal on a 12-1 run. Glen Lake (23-3) – a semifinalist last season as well – pulled to within four points with two minutes to go in the first half, but the Gators finished with another 7-0 surge.

“It’s like a roller coaster,” Glen Lake coach Jason Bradford said. “The first couple of buckets, (our) first two layups were in and out.

“We’ve been behind before, and the girls know how to work through the runs. We say it’s a roller coaster and just keep on fighting. We have confidence since these girls are used to fighting back, since freshman year, each tournament run … (they have) a lot of composure and a lot of heart.” 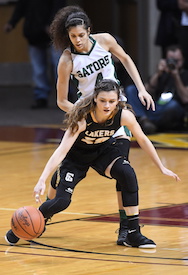 The Lakers played Arbor Prep even in the third quarter – notable especially because senior forward Jennifer LaCross, who scored 10 points during the first half, didn’t play at all during the second because of a broken nose.

But the Gators got rolling again in the fourth quarter, closing on a 12-5 run to earn the third straight championship game berth.

“Last year, losing, that pain is still in my heart,” Lasha Petree said. “I want to avenge it, and I’m ready for it and want to help my teammates do whatever to win.”

Freshman Hailey Helling led Glen Lake with 11 points and five rebounds. LaCross, despite not playing the second half, was the second-leading scorer. The Lakers’ 35 points total were 10 fewer than their previous season low.

“As a team, it’s just fun the memories we make – not even during the games, but like at the hotel (during Finals weekends),” LaCross said. “I’ll probably be thinking about it when I’m missing basketball the rest of my life.”