After struggling offensively in her team’s Quarterfinal, Bowers redeemed herself with an impressive shooting performance two days later.

Bowers scored a game-high 22 points to help lead the Eagles to a 47-30 win over Madison Heights Bishop Foley in Thursday’s second Division 3 Semifinal at the Breslin Center.

The unbeaten Eagles (26-0) with return to the Finals for the second consecutive year and play Ypsilanti Arbor Prep at 4 p.m. Saturday.

The Gators (24-2) defeated previously-unbeaten Glen Lake in the other Semifinal, 57-44.

“I haven't had a good shooting night in a while, and I knew coming in that I was going to have to pick up my shooting because that’s what I am, a shooter,” said Bowers, who had a season-low six points in a one-point win over Schoolcraft in the Quarterfinal.

“I was more calm (today), which is weird because I'm in the Breslin, but I set my feet more and I just had a lot more confidence in myself. I just let it go.”

Bowers drained three of her five 3-pointers during the second quarter as Kent City shrugged off a slow start to lead 30-13 at the half.

“We started hitting shots in the second quarter, and our offense started moving,” Eagles coach Aleah Holcomb said. “Our shooting percentage was great in the first half, and I was very happy with how well we played tonight. We hit a lot of shots, and defensively we shut them down and played good team defense.” 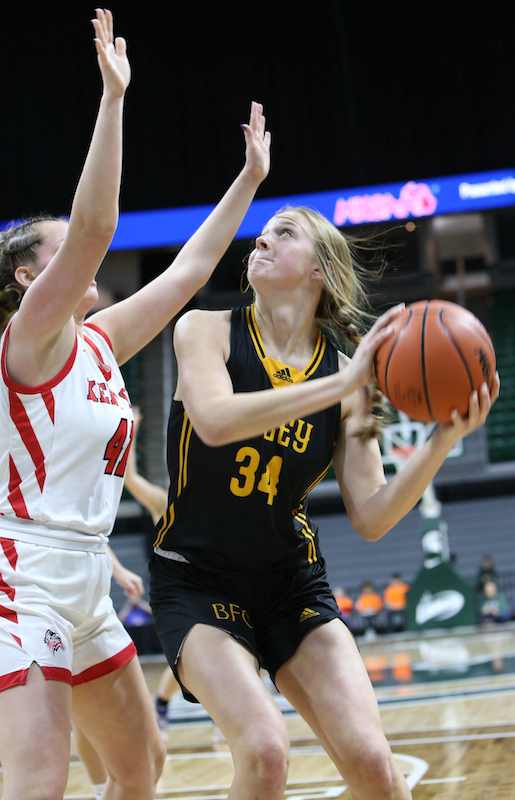 “She was on fire, and she was hitting all kinds of shots,” Joseph said. “We put someone on her to try and slow her down, and it worked for a little bit. She didn’t score that much more in the second half than the first. She’s a good player.”

One of Bowers’ most memorable moments in the game happened in the fourth quarter when she was knocked down attempting a 3-pointer.

Bowers converted the free throw for a four-point play to give the Eagles a commanding 42-23 lead.

“We all played really hard, and it's taken a lot of hard work to get to this point and we are just really glad to be back,” Bowers said. “The two-point loss in the state finals last year has been motivation and made us work even harder.”

Kent City sophomore Madelyn Geers played well on both ends of the court. She made 7 of 13 shots and finished with 16 points, a game-high 14 rebounds and four blocked shots.

Bishop Foley, which was led by Ryan Moorer’s seven points and 10 rebounds, made its first trip to the Semifinals in school history.

The Ventures (20-4) weren’t able to recover from being outscored 20-7 in the second quarter.

“It was a tough game, and in the first half we really didn't play our game,” Joseph said. “In the second half we played them pretty evenly, but they had the height on us and got a lot of rebounds. We didn't quit, and we fought till the end.”