BYRON — Every team refers to itself as a family in athletics.

But the Byron girls basketball team takes that concept to a new level.

There are two sets of sisters, a set of cousins, and three of the four coaches on the team coach their own daughters.

But, assistant coach Brandy Forgie said, there’s more than that.

“The family aspect doesn’t just come from being blood-related,” she said. “We’re all from Byron, born and raised, all but one of us as coaches, too. We kept our families in Byron, raised our kids here. All of our friends here, we have their kids. We started the basketball when they were little. They played together and grew up together.”

Sarah Marvin, who has averaged a double-double the last two seasons, agrees.

The Eagles sit atop the Mid-Michigan Activities Conference standings and 8-0 overall with a team that has lofty aspirations.

Coach Theresa Marvin, whose fraternal twin daughters are Becky and Sarah, points out that there’s still a long season ahead.

“It’s just keeping it going through the winter,” she said. “You have to get through illnesses and exams in the middle of the winter and just being tired. It’s a long season. For us, the focus is winning the MMAC outright. We tied for the championship the last two years we were in the (Genesee Area Conference), and we tied for the MMAC title last year. We haven’t won an outright league title in a long time.”

Sarah, who plays guard offensively but also defends the post, played four sports last year as a sophomore. She was a two-way lineman on the JV football team, competed in last year’s inaugural Michigan Wrestling Association girls state tournament (at 215 pounds) and took home two MHSAA Finals championships in track & field, breaking school records set by her older sister Jessica and her mother, who competed in the throwing events at the University of Michigan.

Sarah didn’t play football this past fall, and wrestling might be a non-starter this winter. 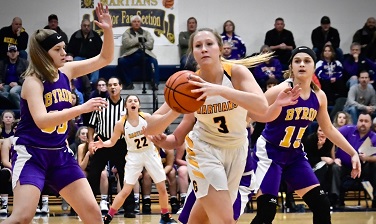 “We’re focused on what the basketball team can do this year,” Theresa Marvin said as Sarah nodded in agreement. “We don’t want to take away from that.”

The Marvin twins have been playing together since the third grade and enjoy having each other as teammates — and as sounding boards.

“It’s always nice to have someone, even if we do sometimes get at each other like sisters do,” Sarah Marvin said. “But we can take practice home and talk about things that worked or didn’t work on the court. It’s really good to have her there and people you like to be around at practice.”

The other set of sisters on the team, junior Makayla and freshman Makenna Clement, are in an opposite situation. This is the first high school season they have been teammates.

“It’s pretty fun,” Makayla said. “I honestly forget she’s my sister when we’re on the court. We’re one big family. Everyone’s a sister to me.”

“Sometimes I give her little pep talks,” Makayla said. “I do get after her sometimes. I’ll say, ‘Shoot the ball!’ I say that to my other teammates, but I don’t get as personal as I do with her.”

“It’s all good,” Makenna said, laughing, “She’s definitely a good resource. She’ll help me on different post moves and tips on better passing. All that.”

During a recent win over Montrose, Sarah Marvin looked to the bench and barked, “MOM!” to get Theresa’s attention, which came as a shock to Theresa Marvin when she was asked about it after the game.

“Did she? That’s not normal,” she said. “Sarah always says ‘Coach.’ She must have said that to get my attention.”

The other family connections are assistant coach Jim Passig and junior Olivia Passig, and cousins Haley (a senior) and junior Allison Hooley.

Brandy Forgie said that, after years of being a travel head coach, she had to adjust to both coaching her daughter Raegan, a senior, and being an assistant. 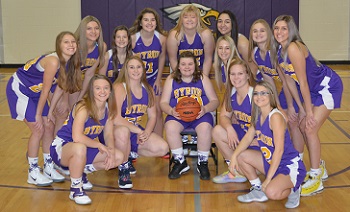 “In the beginning, it was hard for me to be there and watch someone coach my daughter,” she said. “But it got a lot easier. Coach Marvin is a fantastic coach and she knows how to deal with Raegan now.

“Not a lot of people get to experience (playing for a parent),” she said. “It can be hard sometimes because there are two different relationships (mother/daughter, coach/player) meshing together. But I really enjoy having her there.”

Theresa Marvin, in her sixth year as girls basketball coach, has coached with Passing and Forgie in the Byron youth program for more than a decade.

Marvin coached her oldest daughter, Jessica, during Jessica’s high school career, and coached Sarah from her freshman year on and Becky also as a sophomore.

“You have to be a coach first, absolutely,” she said. “You have to have guidelines, and we’re really good at it. For example, my girls don’t know anything the team doesn’t know beforehand. I think it puts too much pressure on my girls to be a middleman, and that’s not fair to them.”

After the game, Marvin said, basketball is left at the gym, at least in her case.

“When we get into the car, we won’t even talk about the game,” she said. “Other parents get the opportunity as parents to talk to their kids about the game. I don’t do that. My husband (Tim) will. He’ll play the parent role, but I don’t.”

That doesn’t mean she doesn’t enjoy watching her daughters play.

“I do enjoy that,” she said. “Sometimes, I wish I could be a parent in the stands and just watch them play, because it’s totally different. But my focus on the bench is (on) decisions I need to make for the team. When they’re out there, it’s not, ‘Oh, those are my daughters.’ I’m in basketball coach mode.”

In many ways, the Byron team’s fast start has been years in the making.

“Jim and Brandy and I spent many years and many weekends when these girls were between the fourth and eighth grades taking them around the state in tournaments,” Theresa Marvin said. “Some played on travel teams, but we kept these units together. It’s automatic for them. It’s about chemistry and the way they work together. As a varsity coach, it’s a dream to have a group of girls who grew up playing together and who all get along.”

There’s a long way to go in the 2019-20 season, but the Eagles hope their family ties, both literal and metaphorical, can lift them to new heights when the postseason begins.

PHOTOS: (Top) Theresa Marvin is in her sixth season coaching the Byron varsity, but has coached most of her players including her twin daughters since they were in the third grade. (Middle) The Eagles defend the lane during a 61-43 win over Goodrich on Dec. 6. (Below) This season's Byron girls basketball team. (Top and below photos courtesy of the Byron girls basketball program; middle photo by Terry Lyons.)