GRAND RAPIDS – Michigan, meet Bree Salenbien – the Adrian Lenawee Christian freshman who stands as tall as a center, plays like a guard, and made a shot Thursday that most seniors never get a chance to launch.

The 6-foot-2 Cougars standout instantly may have bought herself three more years of statewide expectations by draining the winner in her team’s 46-44 Class D Semifinal overtime win over Mount Pleasant Sacred Heart.

But if her full-game performance at Van Noord Arena was an indication, she’ll be up for all of them.

Salenbien’s pull-up jumper from just inside the free throw line with four seconds to play gave her the last of 16 points – and sent her team to its first MHSAA championship game since 2010.

Lenawee Christian (25-1) will face Chassell at 10 a.m. Saturday with a first girls basketball title in school history on the line – and another chance to show a statewide audience more of this phenom and her teammates from the southeastern corner.

“It’s really fun. But I think the whole team is showing the state who we are, not just me,” Salenbien said. “We’ve battled through so many games this year. That one loss helped us this year not want to feel that way again, to battle through everything.

“We knew we’d have to fight like that to the end.”

That lone defeat, by one to Class A Monroe on Jan. 9, clearly was a learning experience for a team with lots of talent but only one senior.

But it will be buried by the memories Salenbien and her teammates continue to make this weekend and the next few years to come.

She finished with eight rebounds, four assists, three blocks and six steals to go with those 16 points against a Mount Pleasant Sacred Heart team that was undefeated entering the night and playing in its third straight Semifinals. Salenbien also had to contend at times with Irish 6-foot all-stater Sophia Ruggles, who finished with 19 points, 15 rebounds and five blocked shots.

The teams were deadlocked 13 times, and the lead changed 11. Only six points were scored during overtime – two free throws by Ruggles 27 seconds in, followed by two by Salenbien with 1:05 to play and then her game-winner at the end.

Salenbien actually missed a free throw with 12 seconds left in regulation that would’ve given her team a one-point lead. But, as Sacred Heart coach Damon Brown noted, the freshman plays well beyond her years – and was about to show it again.

“She doesn’t always,” said Dani’s father and Lenawee Christian coach, Jamie Salenbien. “But when she does, it’s because of the time she’s put in. All of the kids on this team are committed to fundamentals, the coaching staff preaches it and pushes it, and they’ve bought into it and put a lot of time in when no one was there. But she has a lot of athletic gifts God gave her, and she’s using them now at the young age of 14. 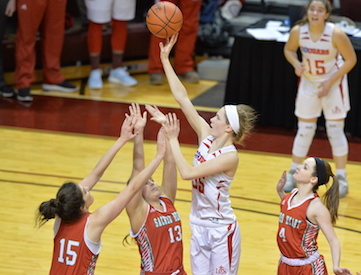 “I’m proud of her hanging tough when she could’ve folded, after missing that free throw especially.”

The Irish (25-1) went a combined 94-10 over the last four seasons, and wins came off the court as well as on. Brown talked about how he nearly left coaching after the 2013-14 season and the death of his wife, Sacred Heart boys basketball coach Keisha Brown, after her fight with cancer. Last season, the Irish ended their tournament run in the Semifinals on March 16 – three days before the death of Haydn Terwilliger’s mother Denise, who also fought cancer.

“We’ve been through these last four years together, and I think that’s why we’re so happy with each other,” Brown said. “From what we’ve been through, this game in no shape or form defines what this team has been through. We’ve held hands through the darkest times. … What we have here is more important than any score.”

And Reetz took the opportunity to lighten the mood one last time.

“This is kind’ve how our team is,” she said. “We laugh about everything. Sophie had 999 career points. It’s sad, but it’s just kinda humorous. (Ruggles actually finished her career with exactly 1,000.)

“I just feel like we all feel we couldn’t have done anything else out there. It’s just kinda a toss-up. We tried our best, we wanted a state title, but being together is enough for us.”