Colleen Nagel can only shake her head when one of her former Grand Rapids Catholic Central basketball players offers an observation after dropping by a Cougars practice.

Now in her 30th year of coaching, and first season of her second stint at Catholic Central, the former Colleen Lamoreaux-Tate admits to the subtle changes that three decades on the bench have brought.

Those changes don't include the lessening of competitive fires which still burn bright or the importance of the relationships with the players or teaching of the game.

But make no mistake, there are differences – changes that have only come through self-reflection. Known as one of the most fiery coaches in Grand Rapids, Nagel still has high expectations for her teams. But time, a shuffling of personal priorities and the wisdom of age has changed Nagel, who surpassed the career 360-win total last week.

"I'll have some of my former players stop by, and they say I'm nicer," Nagel laughs. "You get older and slow down, and it's a different kind of time now. I've always said if you can't evolve with time, you need to get out."

A case in point came a couple weeks ago when the Cougars, on the verge of taking charge of the Ottawa-Kent Conference Blue championship race, suffered a crushing one-point loss to Coopersville after inexplicably falling behind by 23 points at the half. The team also dropped a one-point decision to West Catholic after hammering the Falcons by 30 in the teams' first meeting.

Nagel said her reaction to those losses differs from how she would have handled them during her first seven-year coaching stint at Catholic Central. During that tenure, the Cougars went 167-19, including notching arguably the greatest win in Grand Rapids girls basketball history when the Cougars stunned then 10-time (now 13-time) MHSAA Finals champion Detroit Country Day 51-43 in the 2010 Class B championship game.

Instead of driving her teams even harder after such losses, Nagel said she has the wisdom to use them as a teaching tool.

It's all about age and reflection, she said. The combination of a second marriage, a new job outside basketball, the responsibility and joy of coaching her daughter, the experience of three years coaching at Ferris State University and the recognition that teenage athletes and their parents have changed over the years have caused Nagel to take a hard second look at how she coaches.

Nagel said her conclusions may have left her a better coach, but definitely a person who finds herself examining the big picture over her own immediate surroundings.

Which isn't to say the drive to win has passed her by. What she will say is that 30 years after her first bench position as West Catholic's freshmen coach in 1989, the game remains as fun as ever.

"Kids change, and I'm not saying that's a bad thing at all," she said. "I probably don't yell in practice and in the games like I used to. But I've always said you have to evaluate yourself, and I'm absolutely still having fun." 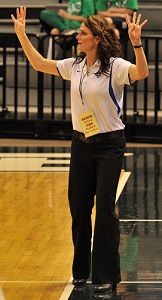 While winning still ranks near the top of her priorities, Nagel said what drives her now – both on the court and off – is the quest for balance. While still possessing a love of coaching, Nagel said family and professional happiness off the court is what she seeks. As for winning, that candle still burns – but it's no longer consuming.

"I will never think winning isn't important. I'll always think my team needs to be in it until the end," she said. "But you can be consumed with things when you should be trying to find a balance in your life. (College) was 24/7 for me, and because of that I began to reflect and I realized life should be a balance. My priority should be my family."

That's probably the No. 1 lesson that came out of coaching three years at Ferris State after leaving Catholic Central in 2012.

"You're always thinking the grass might be greener," Nagel said of making that move.

What she found was the grass wasn't greener. Nagel said the endless fundraising, the long recruiting trail and the year-round duties of a college coach wound up being more than she wanted.

Nagel was content to be out of the game while watching her daughter, Katie, play on the Catholic Central varsity as a freshman a year ago. But when then-coach Trevor Hinshaw decided to devote more time to his family and athletic director duties after going 120-28 in the six seasons after replacing Nagel, she saw an opportunity to return to a familiar post.

She had turned down the job once when she didn't want people thinking Katie had made varsity as a freshman because her mother was the coach. But Nagel couldn't pass on the opportunity when Hinshaw asked again.

"She's such a great competitor, coach and teacher," Hinshaw said of Nagel, who as a member of the search committee recommended Hinshaw for the job after leaving for Ferris State. "The relationship she builds with players is one of the keys why her teams excel on the court. It's the combination of a lot of things which make her a good coach."

Because she recognizes the growth in herself over the last few years, Nagel said she enjoys coaching as much as ever, particularly in the MHSAA Tournament. In addition to the win over Country Day in 2010, Catholic Central had a pair of Class B runner-up finishes in 2009 and 2012. Her 2002 East Grand Rapids team also finished second.

This season’s team is 11-5 overall and tied for first in the O-K Blue, with a chance at another postseason run when Districts begin in two weeks.

"It's the backbone of everything I coach for," she said of the postseason. "I want my teams to be as ready for the tournament like I always did.

"But you can drive yourself crazy in saying, 'This is what we should be doing. How can I create what we need to do?'  You evolve with time. I'm not saying I still won't yell at referees or whomever. But like a parent, you should become smarter.

"You need to see that times change. There's still a right way to play – you hustle, have a good attitude and if you knock someone down you pick them up. But you evolve."